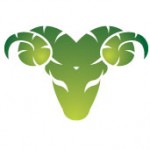 Could this situation work out between Aries girl and Leo guy?