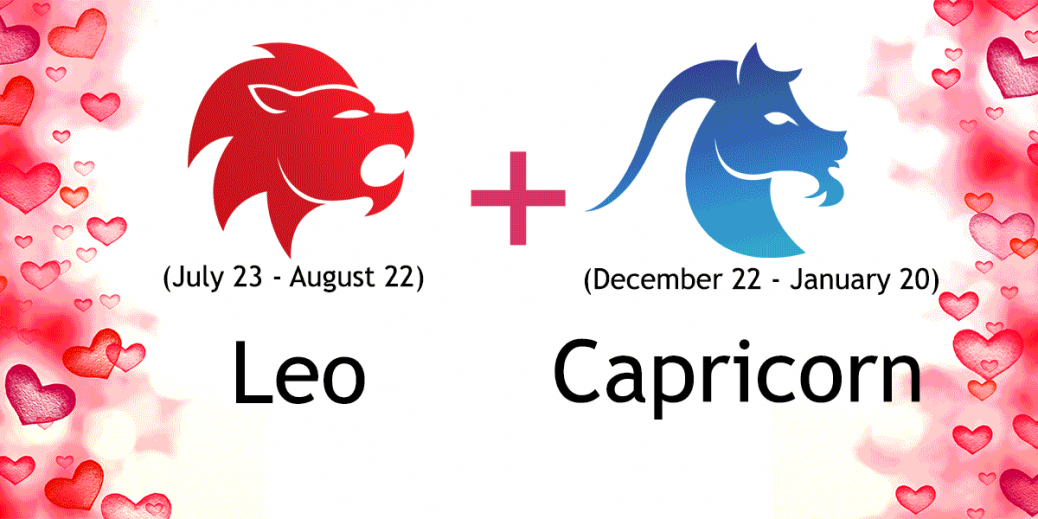 Capricorn are generally conformist thinkers who are highly ambitious and self-disciplined. They always prefer a safe game and tried and tested things. Capricorn’s determination is followed by outstanding patience. Though Capricorn may seem to be very inexpressive but they are very kind, gentle, and protective of their family and loved ones. Capricorn’s biggest assets are their money and their family. They admire their family circle, a good solid savings account and well educated people. They can be considered a snob about these things along with what class status they should be and the community they are in. Capricorn folks often appear cold but they long for admiration and acceptance from people just like everyone else. They can also be somewhat selfish. To defend themselves they call it self protection.

The proud Leo regard themselves to be above others and push to show this manner. To uphold such an image and be told the same by others increases their pride and add to their generous nature. Leo have royal taste in every aspect of life and they maintain their decorum with all their power. Leo cherish the spotlight and boast the successes they have made. Their audience should be one of admirers. This is only to appease them as they like the attention. Regardless of their extreme arrogance they are quite affectionate and enormously lavish. They proudly stand up and roar their arrogant roar as they look after the needy ones. They always defend the defenseless and shield the exploited. Leo are highly sentimental and a die-hard romantic people.

Leo and Capricorn are similar in that they are both highly intelligent, authoritative, practical and quite stubborn. Perhaps Capricorn possess these qualities a touch more than Leo but it doesn’t stop the curious nature each one has for the other. The Capricorn delightfully watches Leo as they sashay through their colorful and witty conversations wearing outfits that are just as colorful and witty. They are in awe at the seemingly impossible goals Leo tend to strive towards and their ability to delegate authority to reach these goals. Then there is the overwhelmingly kind and generous nature they possess as they frivolously spend money with no regard for financial stability. The bond between Leo and Capricorn gives way to the differences between them. Capricorn’s tolerant, frugal, timid, tender and carefully calculating attitude is quite different from Leo’s eagerness and their frivolous, well-expressed, dramatic, courageous and impetuous attitude.

Even though they may try to learn from one another, there is nothing like a good competition between the two. This makes them rivals either openly or secretly. They are both dually bright and very stubborn and neither of them budges from their own part of the world to which they built their empire, each one thinking theirs is better than the others. Capricorn may be influenced by Leo’s bright and sunny disposition, but they get easily irritated when the proud Leo tends to pat their own backs. Capricorn have a lot of the same qualities as Leo such as being authoritative, stubborn, intellectual but so much more so than Leo. However, they don’t flaunt it so much. They are less obtrusive about it. To understand what motivates the other is always magical and opens up their minds and souls to each other. As a result, the affection and compassion experienced between Leo and Capricorn increases unexpectedly, therefore making the bond between them much stronger.

Leo and Capricorn make good friends, siblings, relatives and official colleagues. They also are healthy competitors of each other as siblings, friends and colleagues. But usually their motives are pure with no harm to each other. Being relatives can make them either just formal known or people sharing some common good in some subject of interest. Business ventures can be run by these two together in a great way as Leo are good at creating goals and Capricorn are effective in achieving those goals. The only problem that comes is usually the Leo’s extravagant attitude or argument for authority. In a married relationship or in a love relationship they can face some differences especially because Capricorn are less expressive. But parenthood is one thing they both cherish as they both like to make their children perfect kids and as kids they just love and respect their parents.

The interpretation of each of their qualities is somewhat different in the other’s eyes. A Leo will often see a Capricorn as bitter, egotistical, callous and oppressive whereas the Capricorn sees the Leo as extravagant, hasty, narcissistic and futile. The two can learn and grow from watching each other. Capricorn can build a sturdy foundation that Leo can make use of as they are discovering a dependable friend or associate in the Capricorn. If they looked through Capricorn’s calming and sensible eyes at life they just may be able to see what they can gain. The ability to admit mistakes or being more patient with things are some of Capricorn’s finest virtues. Leo’s ability to set such high goals benefits Capricorn if they choose to discover this. Capricorn should witness life through Leo’s eyes. This way they gain knowledge of being more independent, warm, sociable and a bit more extravagant. The differences in each other, if seen and experienced, bring a sense of freshness and renewed attitude to this relationship.

Leave a reply to Emma Click here to cancel the reply

Match Capricorn With Other Zodiac Signs