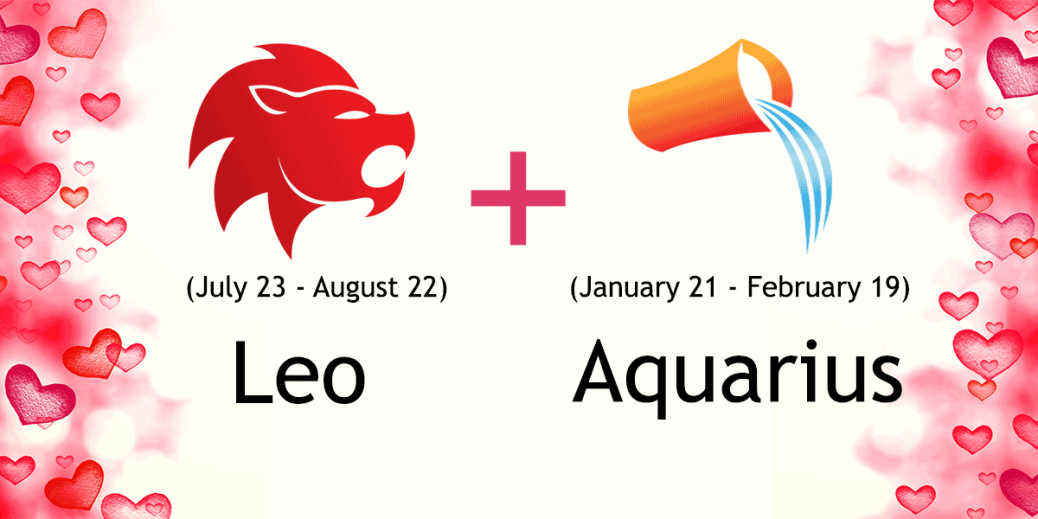 Leo and Aquarius are opposites of each other and their first rapport is based on ‘opposites attract’. Leo believes in personal expressions while Aquarius believes in great groups. With all the different styles and ways, they both have a sense of balance in their relationships.

Leo are generous and courteous people with tender protectiveness and sentimentally affectionate towards their near and dear ones. Whatever and wherever they do something, there is bound to be an audience. With their excellent organizational skills they show what should be done as well as where to go with something whether it is a project, an event or a fresh idea from them or someone else. Given the foundation for what needs to be done, they take over the authority and delegate just who should be doing what. With this ability to successfully direct and lead at the forefront, they are also quite fair and caring to the needy, the ones that are on the lower level of life. This makes Leo even better choice for being the representative who take important decisions of life and work.

Aquarius live their life in an idealistic state. They are highly independent and stand behind any decision or promise they make. They are not the one to hide themselves or their emotions, which makes them easy to read and understand. But they do not easily commit themselves to anything or anyone if they do not care to. Aquarius are open minded creatures who have a tremendous imagination about anything regardless of how ludicrous it may seem at the time. They are highly intellectual and quite extraordinary. Aquarius research, pick apart and stop at nothing until they, themselves, prove it to be accurate. They mix fact with fantasy in their creation of life and stay intensely aware of today. They look into tomorrow with a calculating mind and never look back to what has already happened.

While Leo dictate and delegate their authority, Aquarius dream, plan, figure out and ascertain what needs to be done. Their differences do not cause controversy in their relationship. The similarities between Leo and Aquarius are as advantageous to them both as their differences are, if not more so. They are both very optimistic about things, they are more than generous to others as well as to each other, and they both have a high spirit and are more than willing to protect the needy and the unprotected. What Leo lack in, Aquarius makes up for and teach to the Leo. The same thing holds true for Aquarius’ lack of quality that Leo possess. In a nutshell they make a connection that is always very fulfilling and complementing in all aspect, whatever relationship they share. Leo are able to show Aquarius about reliability, stability and self-respect whereas Aquarius show Leo the art of being able to accept criticism and admit to errors when they occur.

There are occasions where Aquarius’ imagination and plans collide with Leo’s authority and delegation of things. If this is to occur, neither one back down as both are equally dominating and hard headed. Both being as stubborn as the other one they butt heads and they both argue the point that they are justified in what they are doing over the other one. If they both learn to look at the others’ qualities, they may just become a better person for their relationship and strengthen the bond between them. Aquarius tend to go with the flow of things. They merely nod in agreement when criticized and shrug with mere unimpressed indifference to a compliment. Even though Aquarius does not need to be complimented like the Leo do, the former most definitely benefit from learning from Leo’s traits, their warm disposition, their self-assurance and pride. Moreover, they compliment each other’s lifestyles and respect their personal freedoms as well.

Leo and Aquarius make very lively relationships with each other. They have different tastes and together they enjoy them and flourish beautifully. Friends, siblings, relatives and colleagues have great tuning with each other and can work and enjoy their time leisurely as well as in useful manner. But there can be times when they stand apart with their own views and have tiffs which are to be taken care of. As business partners it is very necessary for them to first plan the moves together and see that their opinions coincides or else they can tend of have great loses. Marriages and love relationships works well for most of time especially if Aquarius are ready to give away their detached attitude. Children and parents always enjoy a very fulfilled and happy relationship when they are Leo and Aquarius.

Leo and Aquarius are all dimensions apart. They have a lot to learn and share but at the same time a lot to worry about and argue. Leo are personal, involved, and intense in their dealings while Aquarius are impersonal and rather detached. This makes the Leo feels unwanted and unappreciated which hurts them the most. On the other hand the dramatic and arrogant behavior of Leo is not tolerated by Aquarius. As a result, Leo and Aquarius struggle together just as they thrive together. They are both very caring and generous to others as well as to each other and they leave a lasting impression wherever they may go. But since they both stand to their own opinion, they have to adjust and get ready to sacrifice a bit.