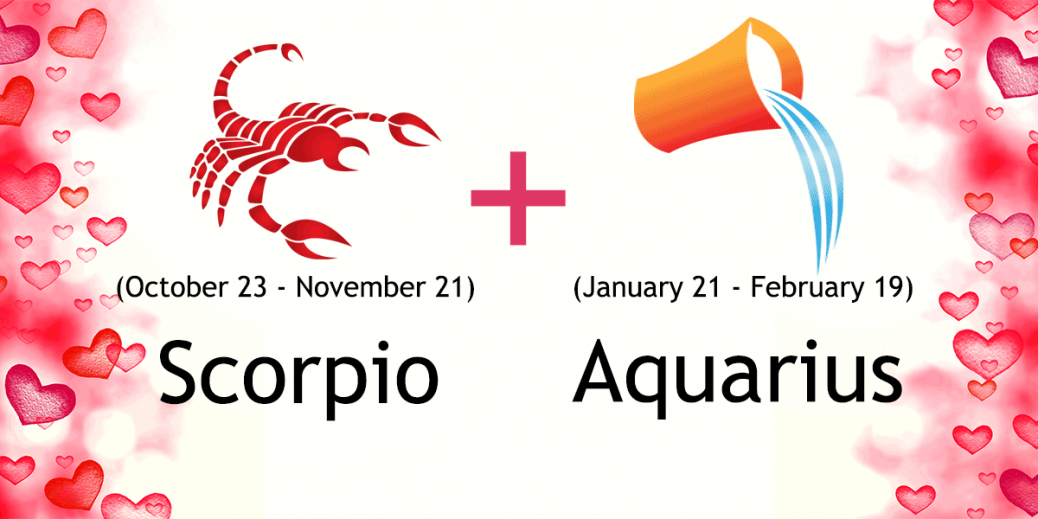 In relations shared by Scorpio and Aquarius, there can be some difficulties and challenges as Scorpio are intense and passionate and respect privacy, while Aquarius are open and out-going and respect independence the most.

Scorpios appear to be mild mannered and calm, however, they can be devious and merciless, as well as quite stingy and difficult to approach. They are invincible people and extremist with composed and sound surface and smoldering passion within them. Beneath the soft voice of Scorpios lay their subtle strategies to enhance their career and personal life. They are the people who love luxury and comforts immensely. Scorpios can sink into depression, or rise to intoxicating heights of ecstasy. They can control their emotions to others and are quite keen on hiding what they do not want to divulge. Scorpios do not show an abundance of emotions, especially in public. What they portray themselves to be does not always hold true to what they actually feel deep down.

Aquarius people are a bit moody but generally one can find them peaceful, substantial, warm and full of decent wits. They are the type to appear spacey with their heads in the clouds. To most they may seem nonsensical; however, their mind is of a genius status and has a unique way of getting to their success. Regardless of this stereotype, they often find themselves thinking of the world’s biggest problems and how to solve them. Their thoughts are almost always positive and usually on a much higher mental and spiritual level than most. They value their independence and do not tolerate being forced down and away from it. They, however, give the same respect to others that others give to them. Their finest virtues are fairness and equality to all walks of life.

Both Scorpio and Aquarius are cut from the same cloth when it comes to getting to the bottom of things especially when it comes to each other. They love delving into the others deepest darkest secrets, or where they should be, to see what they come up with. It makes for an intensely interesting relationship. If secrets are held on one side, the other stops at nothing in figuring out just what those secrets are and vice-versa. With the wild Aquarius and the difficult Scorpio, it really is quite the meeting of the minds. They take ideas and perceptions to a new level. Scorpios are the type that holds a grudge if anyone angers them. Their long memory spans aid in that. Aquarius would hold a grudge too if they could remember why they were so irate to begin with. They typically stay calm and serene and not get angered or even go so far as to let things bother them in the first place.

Aquarius and their outright tactics are seen striking from a mile away, giving Scorpio plenty of time to neatly tuck away their secrets for another day. They both have strong willed ambitions and stubbornness for not budging from their spots and this is what that becomes uneasy in this type of relationship. Given their likes and dislikes, as well as their similarities versus what differs between them, a relationship that involves a Scorpio and an Aquarius is definitely dynamic and it is more than likely be quite interesting and vibrant.
The relationship between Scorpio and Aquarius is usually found to be more successful in a business or family type relationship. Their professional and business relationship is usually good as Aquarius is easy to work with and Scorpio is attentive enough to not let things go out of bounds. As siblings, friends and colleagues also they perform better with each other as their habits and nature does not directly affect each other’s life. As lovers and spouses, there are chances of true clashes which can result in permanent breakup. Even as parents and children their relationship works well especially with Scorpio parents and Aquarius children.

In all aspects of this relationship, Scorpio can teach Aquarius the tactics of self control and discipline and Aquarius can return the favor in teaching Scorpio the ability to let things go and not hold such a grudge on everyone who crosses them. Scorpio often gets angry and keeps that anger on the person who crosses them. However, Aquarius is not always so tactful but when they do get angry, it comes in a frenzied attack so some of Scorpion’s self control comes in quite handy in this situation. In the monetary world, Scorpio is quite cautious with their buck. This is good for Aquarius since they won’t even remember if they got that buck to spend or if they have already spent it. The final outcome of such a bond is actually quite unpredictable but it is better for them to take slow and give each other a fair chance.