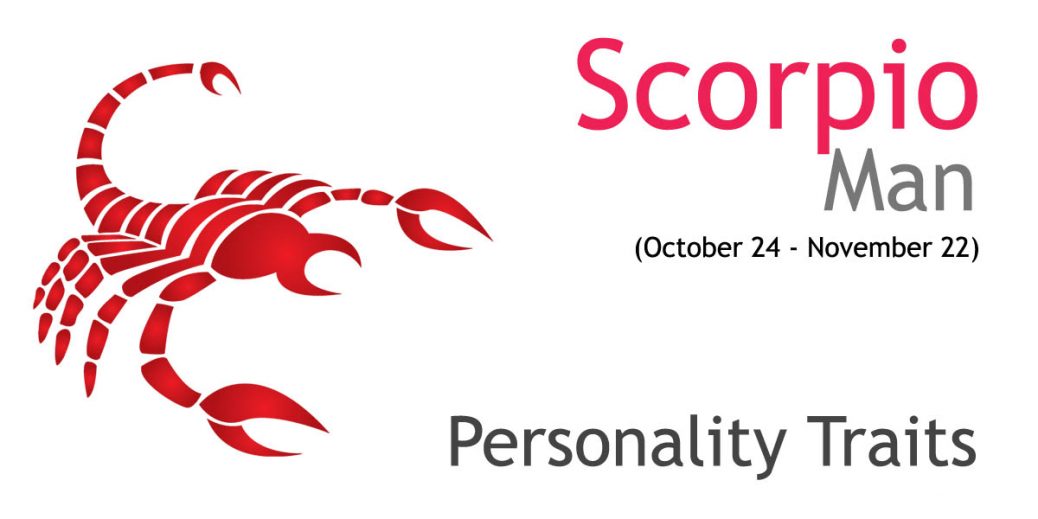 Dark, moody, and immensely sexy, the Scorpio man is intuitive and fiercely loyal with a secretive nature. Stubborn, and deeply protective, this man comes with a magnanimous intensity that’s hard to ignore and is incredibly self-reliant. A Scorpio man’s personality is alluring and complex, often brimming with a whirlwind of emotional bursts. Here’s a comprehensive look inside his mind, nature, and passionate heart.

Personality Traits of the Scorpio Man

A devoted and loyal partner, the Scorpio man is increasingly sentimental with a unique sense of honor that shouldn’t be trifled with. He is not easy to impress especially since he can be unforgiving and take things to heart. Highly perceptive, this man comes with a strong competitive nature and because of his overzealous nature, you will not want to betray his trust because he’s ruled by a nasty temper and will hold a grudge till the end.

Though the Scorpio man has episodes of constantly shifting moods, he is a clarity seeker who will obsess over his sentiments. He carries a possessive streak that can cut into a relationship, and his words can be as cold as ice when he’s enraged. He will openly be resentful if he’s been hurt by someone and that’s because his sensitive heart often can’t handle criticism.

Known to possess a conservative mindset, the Scorpio man prefers to observe a crowd from afar because this man is skeptical and cynical. He is a cautious creature with temperamental mood swings combined with a traditionalistic perspective that centers on building a family and a comfortable home. You’ll often find yourself on the receiving end of his oscillating mind – one minute he’s a control freak and the other an aloof stranger.

The Scorpio man possesses an innate distrust of the world around him. He will study his peers at the office, a love interest, and will often scrutinize the new person in the group by varying degrees. He is selective about his circle of friends and usually keeps his private life well guarded.

A deep thinker, the Scorpio man watches and learns from situations around him and is fiercely defensive of his loved ones. This man is territorial, and his wrath can rival that of a Leo man but his temper is a flash flood of emotions. Extremely resilient, this man has nerves of steel and comes with a deep-seated intelligence and a brilliant ability to grasp concepts, analyze and segregate his thoughts.

It is a known fact that the Scorpio man has a reserved heart. He’s secretive and mysterious by nature. He has a knack for instigating thought-provoking conversations, but he doesn’t reveal much. He remains aloof and brooding and is notoriously hard to read because he maintains a poker face much too often.

Dark Sides of the Scorpio Man

Short-tempered and lustful, the Scorpio man is obsessive and dominating with a compulsive side to his character that tends to fixate on negativity. He will rarely let his partner know what’s happening on the inside because he dislikes revealing his vulnerabilities. He can be fairly pessimistic and often throw chide remarks in a condescending manner if he feels offended. His need for control often leads to a vindictive, intolerant, and jealous character who will manipulate a situation to suit his needs. Given his love for analyzing people and questioning their intent, his suspicious attitude can be an agonizing experience. His imagination can spiral into a jealous frenzy that leads to self-destruction. His thirst for vengeance makes him a vicious individual especially if he’s been wronged because this man will retaliate even for trivial matters.

The Scorpio man feels deeply, and he needs a woman who can handle his volatile antics especially since this man is sensitive and craves attention. Completely high-strung, he gets turned on by a woman who isn’t easy to read, and won’t give the game away on the first date. If you’re the kind to instigate intelligent conversations and act mysterious, then he will instantly be hooked. This man wants a woman with her own personal flair and passion about multiple things and prefers honesty from a partner, so being candid around him is a necessity if you want his full-blown attention.

Touchy and sensitive, the Scorpio man dislikes an abrasive personality and if a woman tries to play mind games with him, then his ability to retaliate will be more than just a sting. The biggest turn-off for him is if you withhold sex because he needs physical intimacy much more than intellectual harmony. This man is likely to lose interest if a woman is emotionally detached, or is indifferent towards his feelings and sentiments. He doesn’t like being controlled in a relationship and prefers a more submissive partner who’s socially competent.

How to Attract the Scorpio Man?

The Scorpio man respects and adores a woman who is dynamic, financially independent, and deals with problems with a level-headed approach. If you’re a woman of substance who has clear ambitions, build yourself with class and dignity to catch his attention.

Since the Scorpio man is ruled by emotion, it is important to win his trust by being frank and straightforward. He’s a man who will seek emotional support from time to time and he craves a woman who is tremendously loyal and can understand his sentiments.

Be passionate in bed

Let him be in control

For a Scorpio man, being in control is important otherwise he will throw in a stubborn attitude. Incredibly insecure, this man will easily jump to conclusions, so it is best to be slow, and cautious around him.

Family ties are important for the Scorpio man so maintaining a healthy relationship with his family and friends would ease his insecurities. Build a lucrative bond with his mother and show small gestures of concern and gratitude.

Classic and traditional, the Scorpio man is a family man and is built for marriage with deep-rooted ideals and a judgmental mind. He loves a strong-minded woman who’s capable of building a home for him and his children, especially someone who has a smart approach towards money management. He generally has a complicated relationship with his mother and will often create situations where he needs to be pampered by his spouse. This man demands creative control and security in the relationship because his territorial nature makes him an authoritative figure once he’s taken lodging into a comfort zone.

Marriage is an instinctive phase with an ideal partner for the Scorpio man who surrenders his trust to appease his abandonment issues. In a balanced relationship, he is a devoted and passionate husband with carnal cravings, both emotional and physical. He will build a utopian family structure that will be under strict supervision – his possessive nature brings out a strong impulse to preserve and protect his loved ones since he craves close-knit family dynamics with plenty of open communication. As a father, he is reliable and trustworthy, but he will be strict and controlling.

Though he may be compulsive, when it comes to money matters, the Scorpio man is prudent and tight-fisted and will avoid mindless expenditures. He is the kind of man who will sit with a banker and discuss prospective investment schemes, and find effective ways of saving money for the future. Though he’s intelligent with money, he also loves luxury and can often let envy get in the way of sustenance.

The Scorpio man’s street smart attitude combined with his intense work ethic thrives on perfection and control. In terms of a career, he prospers in fields like medicine and filmmaking but his visionary experience brings entrepreneurial tendencies. Fiercely independent and adept at multitasking, this man has exceptional technical skills and will make a brilliant restaurateur since he has an impeccable palate.

A Scorpio man in bed seeks intimacy of the highest kinds – an unbridled passion that’s filled with sex, and a lot of sex. Sensitive, and ambitious, a Scorpio man is an intense lover who seeks honest confessions from a devoted partner. He has excessive needs, will be vehemently impulsive, and possesses a confident sex appeal. He loves breaking boundaries, especially in the bedroom so once he’s finished his scrutiny, your womanhood will be hammered against the bedpost, on the table, and just about anywhere.

If you’re dating a Scorpio man, then sex will be imaginative and the foreplay always carnal. If you love being dominated, a Scorpio man will finger your insides laboriously till you achieve extreme pleasure. Everything is black or white in his world, so his sexual energy is all-consuming once you hit the bedsheets. A Scorpio man will defer his orgasm, just to watch you hit climax multiple times and will demand another round of zealous lovemaking if he’s in the mood.

Scorpio men are prone to overanalyzing and jealousy which often leads to petty fights in the bedroom. Adamant and curious, he will be infatuated with women who challenge his authority, in bed and outside. An unsatisfied Scorpio man will get grumpy, and manipulative, especially if you’re asking for personal space.

How to Resolve Differences with the Scorpio Man?

The Scorpio Man is a strong-willed survivor who comes with his share of emotional baggage. This man will aim high and will work steadily, patiently, and relentlessly to achieve his goals so a supportive partner who listens and encourages his endeavors is a suitable match. To deal with his constant mood swings, give him the reigns and remain passive when his insecurities come to the surface. Using a frank and direct approach will ensure your relationship doesn’t suffer many hurdles, but you will need to give him an immense amount of attention, to keep his anxieties at bay.

With an insatiable need to seek out the truth, the Scorpio man is an intense enigma of concentrated fervor and intellectual depth. His personal drive revolves around his love for you and even though he might nitpick, be patient and subtle with your words. He needs a partner who can satisfy his voracious appetite for physical intimacy and is equally adventurous, and emotionally stable to ride the waves alongside him.