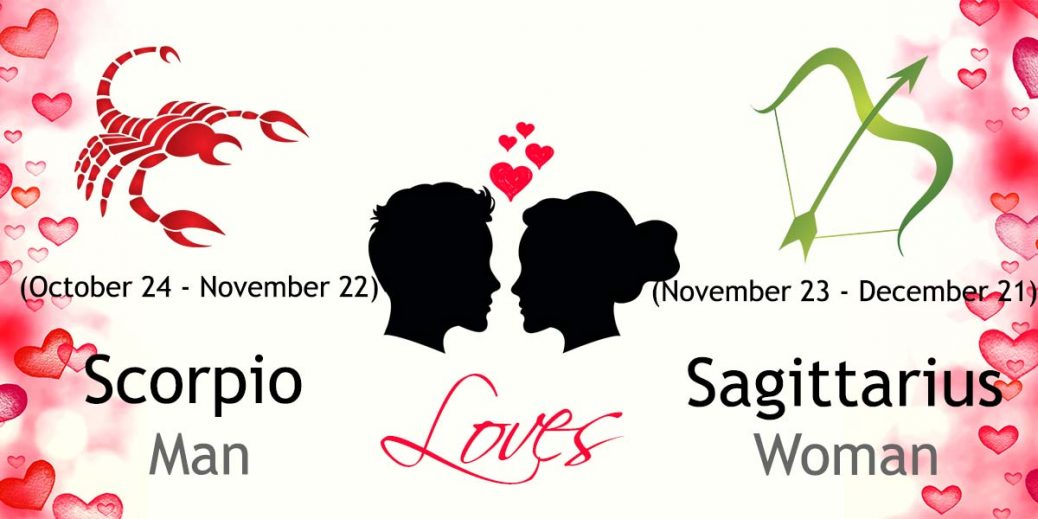 The case of Scorpio and Sagittarius is of two side-by-side signs with just opposite elements and with two very different ways of expressing love, trying to relate. The result can be awkward and a little messy, but can certainly work with awareness and understanding if Scorpio becomes less suspicious and Sagittarius becomes more responsible.

Scorpio man is a superhuman being with a blend of passion, intellect and a magnetic attraction that is challenging to avoid. His mind is sharp, critical, cautious and skeptical making him unique and interesting. Scorpio man likes his freedom and independence but is not really much of a social butterfly. He can read others avidly and without trying but still has a suspicious and possessive attitude that is not always easy to appease. Once the Scorpio man is sure of his woman’s loyalty, she can cherish it to the end of time. He does not believe in infidelity and as long as his woman continues to believe the same, he is hers forever.

Sagittarius woman is a very open and adventurous lady. Although she is extremely optimistic she blatantly come right out and be brutally honest with anyone that she comes into contact with whether they ask for it or not. She is not one to sit in a corner nor is she about to stay home when there is so much out there to be experienced. Sagittarius woman is highly passionate about the things she loves and that include her family, loved ones around her and her man. She needs a lover who can tolerate her outgoing nature as well as be calloused enough to deal with her cut-throat advice.

Sagittarius woman is highly independent and adventure oriented lady with her wings always soaring high. She can be an excellent friend for the Scorpio man but not a woman to have him if she does not become somewhat stable. This is not a problem for her to do, however, if he knows when to give her the space she deserves. Sagittarius woman can be a great companion especially when Scorpio man wants to take a new decision or out of the box idea. Everything from new ideas to new destinations, appeal her. She is not a person who can take domination and nagging easily. She is highly independent and such attitude of Scorpio man can make her deeply upset. But such small reasons are much easily appeased when honest communication is utilized. Anything more, is a huge hindering on their relationship and there is no compromise when trying to fuse the two.

This relationship needs some work to keep it positive. Scorpio man is not one to possess neither a woman lover who likes to leave his side frequently nor does he allows his Sagittarius woman to cut into him whenever she feels the need to do so. This, alone, can end a budding romance that has not even had the chance to get off the ground. Scorpio man needs to really control his possessiveness toward his Sagittarius woman and let her discover whatever it is that she feels the need to discover out there in the world. They need to straight up with each other and know that communication is the key. If it bothers him that much that she needs to explore her independence from time to time, the best thing they can do is talk about it. If they can somehow reveal the reason for their problems and they can work them out, it is the best thing for them.

It is a gorgeous pleasant surprise for both of them to be in such a relationship which has so much to do with. Sagittarius woman gets on with sharing of ideas and adventures, charming her Scorpio man with her wonderful conversation. She teaches her Scorpio man to become more open minded and tolerant of people. She helps him to experience something he has never experienced before, a free spirit. As the relationship progresses, the Scorpio man decreases the anxiety in his Sagittarius woman, by helping her to understand the realities of world. It helps her to feel more mature about who she is. He also helps her become less of a worry wart. As the love grows with the blessings of time, they continue to live in peace and prosper in their oneness that they admire.

The initial sexual bond of Scorpio man and Sagittarius woman is intense and highly fascinating. Sagittarius woman is blunt as to what she wants and Scorpio man’s desire is intensified as a result of her fire and open passion. Her sexual expression turns him on far more than anything he had experienced before and as a result increases the intensity and elusive levels of affection and sensuality of the Scorpio man. Sagittarius woman heightens her arousal for him causing an explosive bond that is unprecedented. She should be careful in being too frank, however, and try to keep to herself in criticizing him too much. With such remarks during their connection on a sexual level, his sensitivity can be hurt causing him to back away from her. This can make the Sagittarius woman jealous or suspicious of her man’s lack of affection for her and may even accuse him of infidelity. She is not one to hold back when angered. She accuses him even if she knows deep in her heart that he is as loyal to her as she is honest and blunt with him. So to avoid such circumstances Sagittarius woman is needed to be verbally soft and make their love making an exotic experience.

After arguments arise, the Sagittarius woman is less apt to deal with the consequences of being separated as she is such the social butterfly. Scorpio man, on the other hand, is used to it. He is also able to easily read his Sagittarius woman and knows that it is just a matter of time before she swallows her pride and comes back to him. She is always willing to make amends as long as her Scorpio man listens. As far as the financial aspects of their relationship, there is none. Neither Scorpio man nor Sagittarius woman should even bring up the subject. Keep things separate and leave it at that, plain and simple. The connection between these two is not easily maintained unless they both work at it. If the desire is strong enough and they can make it work they are able to strive toward anything and be successful at it.