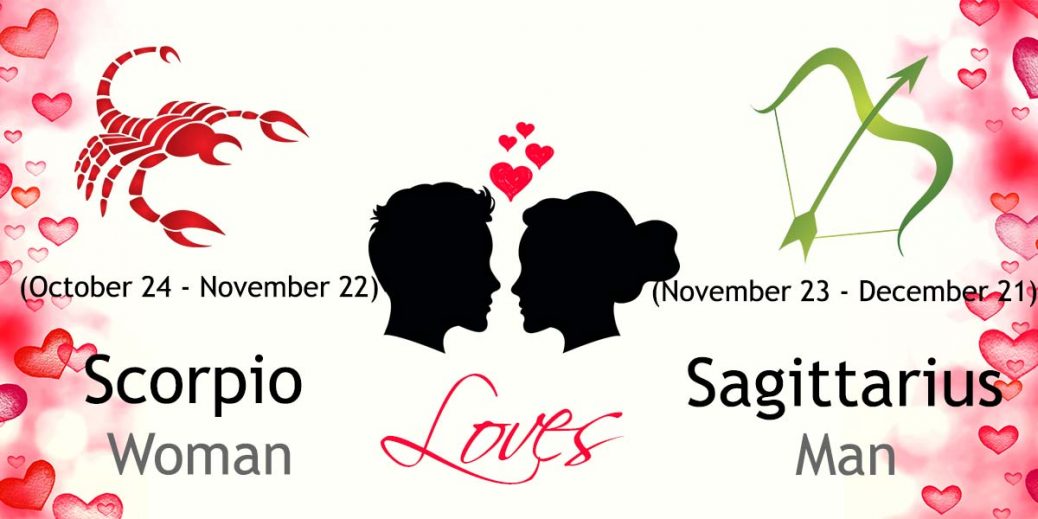 The Sagittarius man is ready for a relocation, for a respite from his daily routines. You both, as a couple, may be needed to tend to some family affairs impacting the Scorpio woman. Don't skimp on caregiving for elders. A child or friend of the Sagittarius man might suddenly resurface, asking for assistance. The Sagittarius man is not prepared for change of plans and could need the Scorpio woman by his side. As you both are going through this stress, be open with one another. These small conflicts in your interpersonal lives can take a toll. One or both of you may be tempted to delve deeply into your past memories. Remind each other of your meaningful future together.

The relationship of Scorpio and Sagittarius can be rocky but at the same time highly stimulating. Scorpio thoroughly enjoys the fresh air that Sagittarius breathes into the relationship. Life is always exciting for these lovers! Sagittarius considers Scorpio wise and appreciates the depth of perception Scorpio has.

A Sagittarius man is a very open and honest creature almost to a point of being too honest sometimes. He gears himself towards the truth almost every time even if it can hurt someone. He is an optimist and quite friendly and sees the hope in any situation no matter how terrible it may seem. To him, the process of being in love and losing that love is as natural as the test of time.

A Scorpio woman is a charismatic and glamorous woman, who can seduce almost any man on this earth with her single glance. The depth of her will and the grace of her persona are incomparable and definitely appreciable at all levels. Although she doesn’t care to be around people too much, Scorpio female is very confident in her decision making and never changes her mind once she has made it up. She is stubborn, jealous, suspicious and possessive; however, her ability to love has a deep desirous passion that is hard to keep away from and the man who gets it is definitely lucky.

Scorpio woman easily attracts the Sagittarius man with her magnetic personality and captures his heart in just a flash with her passion and intensity. These same raging feelings also trigger a devotion within her that makes him feel like there is no other woman on earth he could ever want to be with. There is higher tolerance in the relationship as well as an admiration for her and her strong character. The key for Sagittarius man to have a long lasting relationship with his Scorpio woman is tenderness. He can also show her that perhaps a little bit of jealousy is healthy in any relationship, but to bring everything and everyone down with the same antics time and time again just brings misery and unnecessary fear and suspicion. She has to take a bigger role in motivating him towards a good career move and help him discover his real potential to formulate things.

In the beginning of the relationship, Sagittarius man makes his Scorpio woman feel the things she had never even dreamed of. It gives great push to their relationship but the flirtatious nature and positive energy flow of Sagittarius man irritates her and jealousy surfaces in long-term togetherness. He needs to support his Scorpio woman if he loves her at all and try not to be nonchalant about what she wants or needs. However, she can learn from him, and she knows exactly what she needs to learn as she can sense what he knows, she can be the better person for it. As far as their financial relationship is concerned, it is easily taken care of if dealt with from the very beginning. He tends to be a bit over the top with his purchases. But if he earns well, it won’t be much a problem for her.

As the passionate Scorpio woman and jolly Sagittarius man start accepting their differences to a level of appreciation, their love turns out to be a dazzling experience for both of them. Soon she starts understanding the dreams of her Sagittarius man; his nature expands to its highest level making him an enthusiastic and devoted mate. He also learns to make her feel loved and attended by spending more quality time with her. The honesty and loyalty of these two blushes to red and make them trust each other and feel comfortable even in the absence of their partner. With every passing moment their relationship becomes stronger and warmer with the soft colors of romance and jiggles of joy.

The sexual relationship between Sagittarius man and Scorpio woman is vastly different, but not necessarily in a bad way. He is a definite fire and she is passionate water and with some efforts they make a successful and gratifying sexual bond. Sagittarius man always tries new methods of love making which can be disappointing for the Scorpio woman sometimes but most of the time she welcomes them as it brings newness to her sexuality too. His fiery passion can sometimes come across as immature and idealistic whereas she wants the feel of a sacred and all consummating love between them. The weak areas in this bond occurs when he decides that it is a good time to bring up something that has been on his mind. But that might not be a good timing to her. This, in turn, causes her to do the same, but on a bad note. She turns cold and conjures up things in the past that he had done to hurt her causing any passion he did have to die out completely.

Although they are both such different creatures, Sagittarius man and Scorpio woman can learn to have a vivacious and colorful relationship with a little compromise from each of them. She can teach him self control — he needs to ground himself a bit more in his bouts of lashing out bad remarks toward her and hurting her feelings — and be able to show her that life doesn’t have to be so serious. She doesn’t appreciates him frolicking about the women as he flirts away and he does not tolerate too well her ties that want to bind him to her and only her. If he can be more tolerant to her feelings and go a bit out of his way to show her more love and tenderness, and she can perhaps not be such the jealous monster each time he may flirt a little here and there, they can learn to strengthen the bond between them.