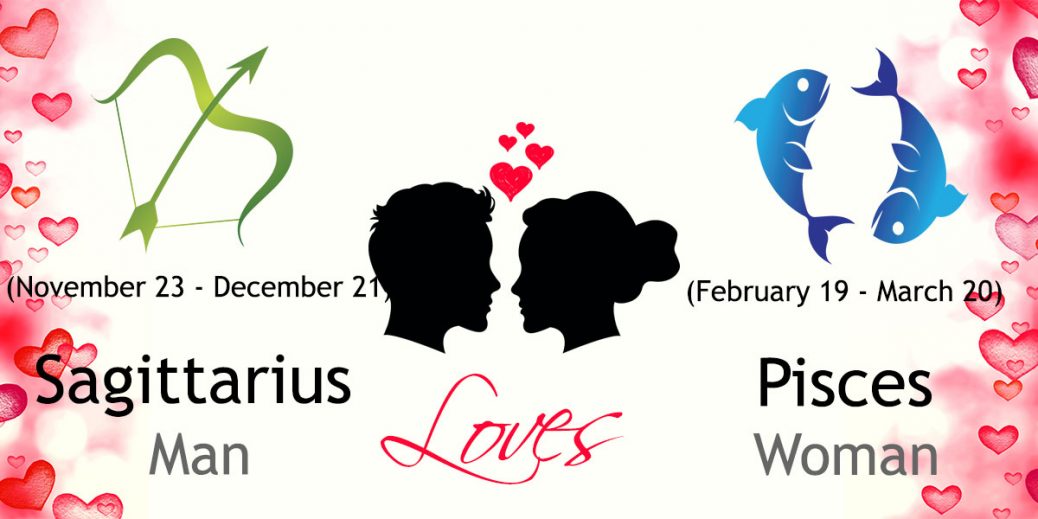 Sagittarius and Pisces always find each other quite interesting. Both of them are inclined to look for the best in their partner, and this idealism keeps on strengthening their bond. Sagittarius’s style in love is radically different at times while Pisces always has a quiet and smooth play.

A Sagittarius man loves life. He is a kindhearted man with lots of enthusiasm in his persona. He is straight forward and bluntly honest with lack of deceit. He loves to flirt, to converse, to question everything around him until he arrives at his own truth. He is not one to hide many secrets as his gift to gab shows his true colors in almost every aspect of his life. His amazing good luck streak holds true to him most of the time as he works around. A Sagittarius male gives his woman all the fun and laughter to enjoy each moment of their relationship.

Pisces woman is sensitive in nature and an ultra feminine lady with all the qualities of a woman. She is not a great initiative taker but once she gets talking, she can grab hold and run with it. She has a tendency to get pulled in two opposite directions that makes it difficult for her to make the proper decisions at the right time. A Pisces female never tries to dominate her man and honors him above all. For any man she loves, she is a perfect admirer with all the charm and dreamy qualities a lover wants in his woman.

The relationship between Sagittarius man and Pisces woman is compelling and very strong. There is nothing better for Sagittarius man than having someone who truly loves to listen to him intently and believe in every word he says. She, with her ability to listen and perceive nicely, strikes her Sagittarius man well. Her womanhood is adored by her man. She is quite open-minded towards work and personal life and likes to keep harmony in all aspects with her mate. With her innate way of continuously convincing her Sagittarius man to express him, it becomes rather closer relationship. But she has a very delicate feeling whereas he is very blunt moreover she is introvert and he is extrovert. They can realize they are too different for each other and extinguish the love relationship, still becoming friends and keeping the peace between them, or they can realize that being different is not a bad thing and try to start again on new grounds.

A Sagittarius man lives in the real world with all his naïve dreams and also inspires his Pisces woman to do so. He places a high value on personal liberty and mutual trust between their love relationship. He is full of personal confidence and enjoys taking risk in all aspects of life. For instance, when it comes to honesty, he takes the tried and true approach whereas she chooses her ‘facts’ based upon feelings. If they do not make an added effort to appease such differences they eventually give up trying and the distance between them grows. They can do one of two things to continue to be happy. With a better outlook on what the other person is like, they may just be able to make it work the second time around. He has to be careful not to be too harsh and frank with his words for his Pisces maiden as he has a tendency to do because she has very fragile emotions.

At the touch of love every soul starts humming the most melodious tunes. The sweetness of the unconditional love of Sagittarius man and Pisces woman is sweeter than honeybun. They start knowing each other, understanding the needs of each other and support the other whenever required. The friendliness of the Sagittarius man teaches his Pisces woman to feel safe around him both about her individuality as well as her emotions. Likewise, she also feels utmost comfort in sharing her dreams with her Sagittarius man, who patiently listens to her and gives all of his to help in making them come true. None of them has ego problems once their heart tastes the bliss of love and they both are ready to submit to each other both emotionally and physically with such a romance that is even envied by the angels of heaven.

A kiss makes the heart young again and wipes out the years for most of the couples who are really intimate. But sexual relationship of these two needs to have some warnings. Although he finds her very seductively appealing, which increases his desires for her, his spontaneous urges are not easily extinguished with her bouts of seemingly disinterest in the whole intimate scene. Even though she finds him equally alluring, her less than enthusiastic approach is no match for the passions of his desires. When they both meet equally on this level, Sagittarius man enjoys his Pisces woman’s feminine qualities as she experiences just how much he desires her. He, however, have to be careful that he doesn’t overdo his ‘physical desire’ for her outside of this mutual meeting of the souls. In doing so, he only makes her think that it is the only reason he wants to be with her. He needs to put himself forward and show his Pisces woman, his emotional feelings on other levels, not just sexually.

The initial relationship between Sagittarius man and Pisces woman is quite compelling and wonderful. The chemistry between them is immense. Unfortunately, there are too many differences to lead a smooth and quarrel free life with each other. If these quarrels are not settled early on, it can cause distress between the two as it drives a wedge between them and causes hard feelings towards one another. With her head up in the clouds and his feet planted firmly on the ground, they are just two entirely different people. Their differences result in argument more times than not and it is not easy to overcome these differences, nor will it be easy to come to a conclusion. He desires to flirt and converse with the world around him and this upsets Pisces woman and cause her to become insecure as her need to be close to him makes him feel too bound to her.