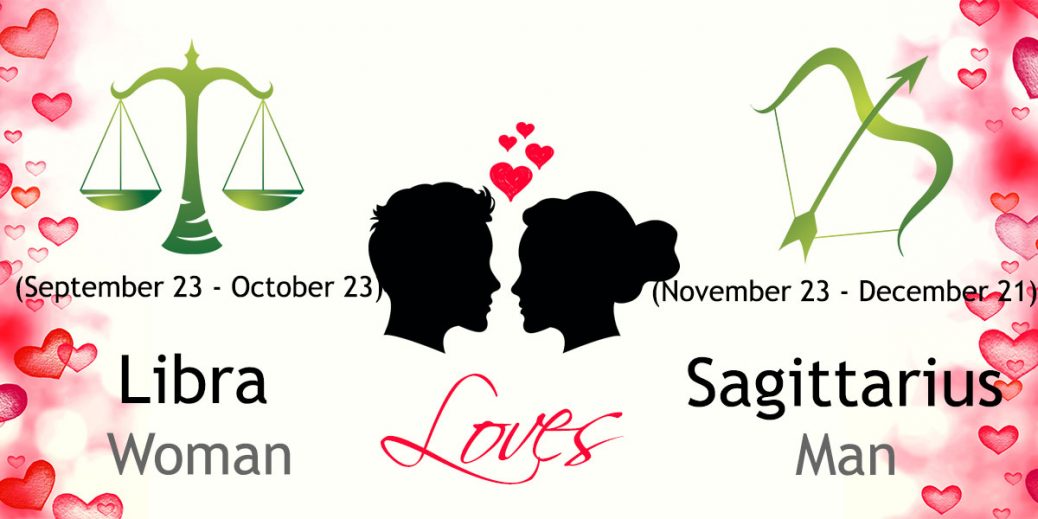 The Sagittarius man is focused on family cares in the year 2022. A mother or mother figure might be in need of assistance. The Sagittarius man should allocate as much time and funds as is reasonable for both of you. The Libra woman could be a victim of injury or accident. Bad mouthing or competition could be a real strain for the Libra woman as 2022 progresses. Don't get drawn too much into an obsession about reputation. Instead, turn to one another for support. Year 2022 demands greater commitment from both of you. Let your relationship be a real respite from the cares of the world.

Libra and Sagittarius share a very smooth and comfortable relationship. They have a lot of fun together, and laughter is truly a gift in their relationship. Good conversations are probable when they are together, and shared interests strengthen the bond between them. Both understand their partner’s needs and desires well.

A Sagittarius man is never alone. He is always surrounded by a crowd around him and that also usually the female crowd. His enthusiasm and curiosity is contagious while his acquitted liveliness is sometimes tough to handle. He needs to be independent and explore his freedom until he feels his hunger is satiated. He is a highly optimistic person who trusts everybody and in the process he gets cheated and hurt sometimes. Being in relationship with a Sagittarius man can bring lots of fun and adventures to his woman’s life but at the same time she has to adjust with his tactless frankness which can hurt her at times.

A Libra woman is intellectual, clever and highly logical, however, quite indecisive. She is a woman who loves her independence, the wonderful forms of art and the beautiful ballads of music. She respects ones honesty and ideas and enjoys a good debate when presented with the opportunity. She is pleasured by the lavish and the comfortable lifestyle and seeks appreciation from others from time to time. She always startles her man with her marvelous magnificence and strong balance. There are a very few women are at par with the level of determination and feminine elegance showcased by the Libra woman.

Sagittarius man and Libra woman make a pairing that is successful, inspiring and motivating. A lot of what he seeks is fulfilled by his Libra woman lover and the sooner she assures him of this the better. She works through any problem and solve it the best she can. Even though she has the mentality of a man and can think and come to conclusions using the male mentality, she is extremely feminine in her appeal to him. If she can successfully keep her Sagittarius man within her reach and she shows him the love and adoration he wants in a woman, the bond becomes harmonious and well balanced between them. This is easily attainable as long as she is not married to her career and gives more attention to him. As she goes off on frivolous matters that don’t make much sense or mean a thing to him, she can quickly lose his interest and perhaps her love.

Sagittarius man gives a new direction to the life of Libra woman in all aspects. This combination is powerful and their connection is perfect but he should never try to persuade her to do anything she does not wants to do. Even if he succeeds in doing so, she gets irritated and miserable. She is satisfied with this unity for a while, but not forever. If he is patient enough with her, she is truly his in no time. She is even able to dominate the relationship if she can match his intelligence and ability to converse with her Sagittarius man on a philosophical level that matches his. Her frustrations are very real, although unknown to most including her, but in the company of someone who she can share her ups and downs with appeases her frustration and definitely Sagittarius male is the right man to pacify her.

Fingers intertwined, hearts beating fast and the strong bond their souls share, make them a wonderful US! As the Libra woman and Sagittarius man stroll along life’s path and share a connection of thoughts that they blissfully enjoy, they receive deep gazes with tender lingering touches that last forever. She fulfills the entire child like needs her Sagittarius man makes and keeps him cozy in the protective blankets of her tender loving care. While he makes her feel a lot loved and care with the devotion he gives to her and brings a lot more enthusiasm and optimism and fills her life with lot more passion. Together they dream of a rainbow and shooting stars to make their romantic ideas come true. They admire still waters and words that no one could say but feel through the loving silence.

The beauty and charisma offered by Libra woman to his Sagittarius man creates an intense passion in him with a mere look or a flash of her smile. She initially sets off a romance in him that burns within him and that burn moves onto an intellectual level as she stimulates his brain. The primal desire between a man and a woman is more often than not subconscious. Even though he feels the need to roam and satiate his hunger for freedom, she tends to somehow soothe this need into a calm that he feels so comfortable in. Libra woman, in turn, arouse her imagination as his physical nature increases her hunger for him. The result is a sexual encounter that is unprecedented. In this sexual relationship, she, at times, seems far away even in her man’s embrace. This bothers Sagittarius man, even though her elusiveness was what lured him to her in the first place. His demands and dominance in his lovemaking sometimes bother his Libra woman as well even though they are the same emotions that made her tremble into submission for him from the beginning.

Even though these two have a wonderful relationship but nothing comes without a price. They need to understand each other and compromise at some levels. She is strong enough to love him, but not strong enough to have his frustrations be taken out on her. And at such instance he can be very rude and blunt at his words hurting the soft emotions of lovely Libra woman. Also female crowd around him makes her feel insecure and she can be furious which troubles him. He is quick on picking up her vibes whether she tries to show them or not and with the intense feelings in sensuality, emotional and mental levels, as well as being highly attractive and perceptive to others, there is jealousy that surfaces in Sagittarius man whether it is expected or not. Moreover he also gets bruised by her masculine attitude which surfaces’ time to time giving him lip lashes.