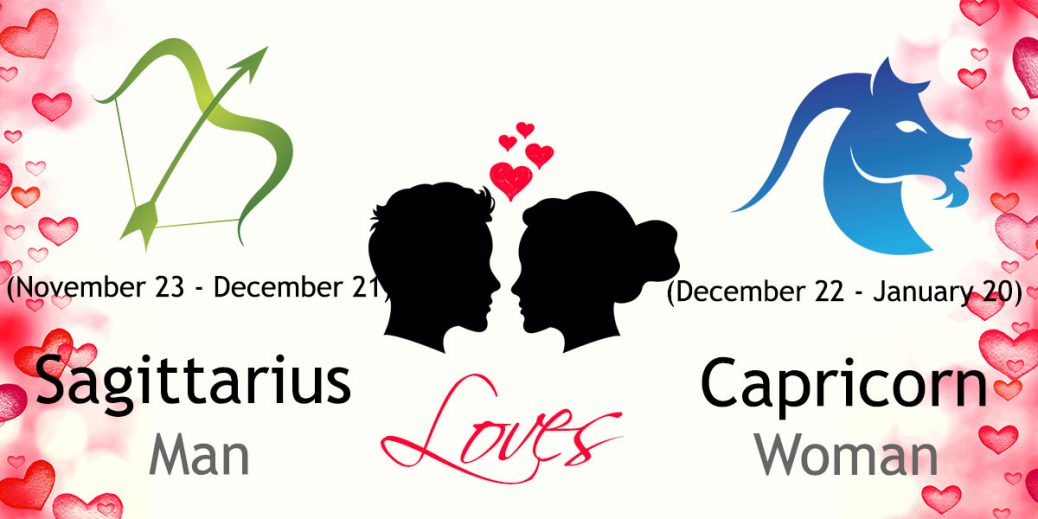 Unrealistic expectations often lead to unpleasant experiences -- unhappiness and disappointment. Money concerns are on your mind as a couple. Sagittarius man seems to be drifting away. It may come as a shock for the unprepared. Deliberate well and voice your concerns with your partner. This is a good occasion to do some long-term planning. Map out where you want to be as a couple in six month, a year or even further down the road. Take a mental health break if one or both of you need it. Look for low key, inexpensive ways to blow off steam. Worthwhile company can be found with siblings and co-workers. Enjoy music or art together. Get back to the shared interests that brought you together in the first place.

The association of the Sagittarius and Capricorn brings both challenges and growth opportunities as they both have quite different love natures and needs. Sagittarius throws them wholeheartedly into the love of the moment, without much interest in long-term relationship planning. Capricorn, on the contrary, is considerably more cautious about starting a relationship, but once he or she makes a commitment, it is a lasting and serious one.

Sagittarius man is very truthful and honest but is also quite the flirt and loves attention. He may be playful, but he doesn’t play games with anyone’s feelings. If he were to ever lie about anything in his lifetime it is only because he believes it to be the truth. He is more of an adventurous individual who loves discovering new things in life. He loves discovering people as well and always finds his way to know their deepest secrets. When seriously in a love relationship, a Sagittarius male loves his woman with complete honesty and loyalty and remains her faithful lover to the end.

A Capricorn woman has quite the hold on reality. She knows what she wants, will know how to attain such goals and the best way to get things done. She is always well grounded and has a level head on her shoulders. Her life is orderly and tidy and her decisions are well thought out and quite concrete. A Capricorn female is not much on the casual and flirty nature that others possess and is very realistic and sensible about her affairs. Once a man has gotten close to her, he can rest be assured that he has a loyal and protective friend for life.

The stability and self belief of Capricorn woman makes her irresistible for a Sagittarius man. He admires her practical and sensible nature as a wonderful quality. The compassion between them grows as they both realize the direct approach in life is the only way it should be. They understand each other all too well and it becomes a boon for each other. He is amazed at his Capricorn female’s dedication in reaching her goals and she feels the same about him, however the way they reach these goals is not so similar. But in the relationship she may make a few mistakes now and then or maybe she isn’t doing or feeling something towards her Sagittarius man in the times he needs her most, but to keep such things to himself is so much better than throwing it all on her.

A Sagittarius man is a very good match for a Capricorn woman as his ideals attract her and make things possible she never thought even in her dreams. Actually the reality is he shows her the hurtful side of things just as easily as he shows her the amazing ecstasy that can be felt. She looks at her Sagittarius man in awe with his innate honesty and truthful manner. She most likely chooses the sure thing over risky adventures. Once she has made up her mind about something there is no altering her decision. Sagittarius man, on the other hand, walks down a path, looking around, stopping on the sides here and there, perhaps wander off that path to test the waters someplace else to be sure that the path he is on is indeed the right path. This makes him an exciting mate for the Capricorn woman. But his truthful daggers only hurt her more than they help her in anyway. It is better for her not to mind his words and deal with them wisely.

Sagittarius man and Capricorn woman experience many miracles in their relationship, once they really decide to be together. He has truly magical ways of lifting the spirits of his Capricorn woman out of her own deep spells to make her a brighter person and she solves all the twinkles and riddles of her Sagittarius man to make him a more satisfied person. With impossible dreams and endless confidence in those dreams, they discover a new world of compassion and oneness. Together they become cheerfully optimistic souls with bright sunbeam in their eyes to share their higher faith in their love and harmony. The ecstasy of their love draws their heart together submitting themselves to each other forever.

Capricorn woman has an earthy sensuality which is very real and refreshing while the Sagittarius man has the fire of passion in his sexuality which gives a blaze to their love making. Their sexual nature is a ground that has to be softly treaded on in some areas. She thinks that lovemaking is something she allows her body to consummate as its need/desire arises. She denies the passion that she could feel and never admits to becoming emotional in such times of intimacy. While he has a strong passion to show his masculinity through the physical love and make his lady feel loved. While enjoying moments of love, he can show his Capricorn woman that trusting in him and letting her emotions go from the bottled up state they are in, isn’t such a bad idea and even makes their connection so much stronger, their bond deeper and their love making an eternal experience.

The relationship of fire and earth is not an easy one usually. She tends to lose herself in him as she learns how to mold herself to his qualities more than her own. But then she feels distressed and may need a road map in getting back to what made her ‘her’. On the other hand, the simple non expressive way of the Capricorn woman may perceived to be a cold attitude by the Sagittarius man and he may try to cut her down quite candidly, and she must realize that he doesn’t do this on purpose. His innate sense of honesty just comes out of him and he doesn’t see the consequences of his harsh words which are never appreciated by her as she does not tolerate the rudeness of anyone and she definitely do not stand by while someone runs down her list of faults. In the long run, both of them have to adapt to some of the ways of the other.