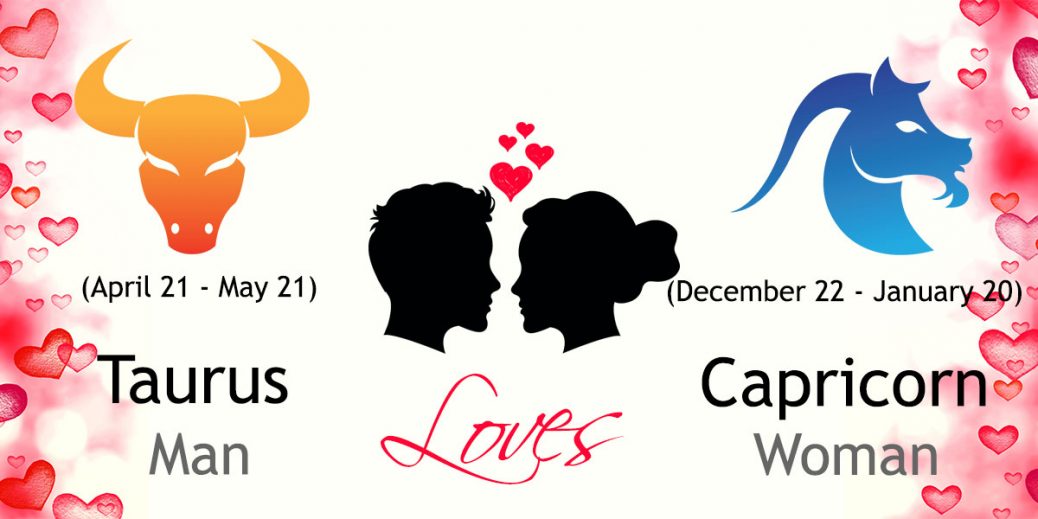 As the two of you make your way through your busy days, make sure you are careful with valued belongings especially when you find yourself in a crowd. Someone may ask you for a loan. Talk that idea out together, fully and in private. Be wary about what you loan out to others and to whom. You don't want to rush through this decision without both of you onboard. For the Taurus man, this is a phase of life full of socializing and potential networking contacts. The Taurus man is feeling on the top of the world, camaraderie wise but don't forget to make sure the Capricorn woman isn't excluded from the fun. Make some time for romance and don't underestimate how far a little show of affection could go--a gift, a handwritten love note.

The combination of Taurus and Capricorn is one of the easier and interesting one. Although they are different enough to sustain each other’s interest but at the same time they share enough common goals in love to keep tension to a minimum. Both Capricorn and Taurus share a basic appreciation for sensuality and earthy pleasures.

A Taurus man is a person who knows how to embody the role of the secure, masculine caretaker by channeling his ability to persevere through difficult times. The majority of the time he is calm and composed individual with a very stable and practical approach. Although he places a lot of value on his material possessions and his financial security, he can also be extremely sentimental. He prefers the unwavering life that is not disturbed by many unexpected surprises, and if his lady love, relents the power of the home and house to him, she will be well taken care of.

A Capricorn woman is practical, smart as a whip person who is able to focus on what is important to her and pursue it with an almost superhuman level of dedication. She is not bogged down with the confusing, conflicting emotions that create so many difficulties in other people’s lives. Instead, her first priority is not matters of the heart, so it can be quite a challenge to win her over. When a man does get her interest, it is important to her to be in some kind of significant position in his life. She can never be comfortable in an unimportant position in any relationship.

A Capricorn woman embodies everything a Taurus man could hope or dream for in a strong, practical, and wise woman. While he may find himself desiring more of an open display of affection or sentiment, he soon comes to realize that her steadfast commitment to him over the long term is simply her way of showing her love. But at the same time she is pretty, warm and feminine enough to have exquisitely tender feeling for her dearest ones and once the Taurus man becomes one, he enjoys such undivided attention and devotion that makes him feel secure and even more peaceful. There is an enormous amount of respect and admiration between these two lovers and when they choose to form a family, they have the capability to build a strong home that has one of the firmest foundations.

The Taurus man is extremely responsible and level-headed person. While Capricorn woman is very hard to win over, Taurus male is one of the few who has the true dedication required to genuinely capture her heart. Neither of the two is particularly flowery when it comes to verbal confessions of love, but he is definitely the more sentimental of the two and can bring out of softer side of his Capricorn female. He loves and protects her and at the same time respects her individuality, supporting her in all her endeavors. He never allows a minor tiff or issue get in the way of letting their relationship work and prizes his lady like rarest gem. They both prize stability and feel most content when they are working towards something greater, and they provide each other with a common goal that they both desire.

The Taurus man and the Capricorn woman make a lovely relationship with such intense devotion that they even start reading one another’s thoughts with due time. Both of them love peace and stability and possess each other endearingly. In gardens of angels, basking in the sunshine of love these two enjoy their earthy passion and strong ways of loving. They both are dependable and have sureness in their togetherness with an aura that prevails around them forever. Taurus man understands how to be less stubborn and Capricorn woman learns to be more expressive. Though their love has less to do with flowery expression but still the meadows they walk are greener with pleasant fragrance of earth and shimmering colors from sky to bless them with forever happiness.

Since both the Taurus man and Capricorn woman are earthy beings, their sexual relationship is more prominent than other zodiac signs. Once the two make it into the bedroom, they experience a kind of pairing that instantly feels comfortable in each other’s arms, which help their relationship to unfold. The physical aspect of lovemaking is the main focus for both of them. Neither of them requires the sweet, wooing whisperings that are associated with more emotional or romantic types. Instead, they allow their bodies to do the talking. Taurus man’s ability to express himself in full honesty and sincerity without even uttering a word is very appealing to the Capricorn woman. His sensuality and erotic ability, stirs her deepest passion which is very intense and fulfilling. She dislikes games and knows exactly where she stands with him. In many situations, Capricorn woman can create a divide between sex and love as a defense mechanism to avoid getting hurt in a relationship. However, she gets the sense that she can let down her guard and enjoy Taurus man’s earthy passion as more than just a physical act, as she can tell that there isn’t an ounce of deceit to his feelings.

The one important issue that the relationship of Taurus man and Capricorn woman is bound to face is their difficulties discussing their emotions and knowing how to confront their issues on a verbal level. She can be even worse than him, as she has more pride in her independence while his stubbornness is one problem that she has to face. There is no doubt that they have the patience and perseverance to get through it, but sometimes communication can be a problem. Neither prefers to naturally display anger, fear and insecurity and decides to keep it all inside and but generally the Taurus man has to get in touch with his tender side to break down the barriers and establish a rapport that allows the two to speak more freely of their inner experiences.