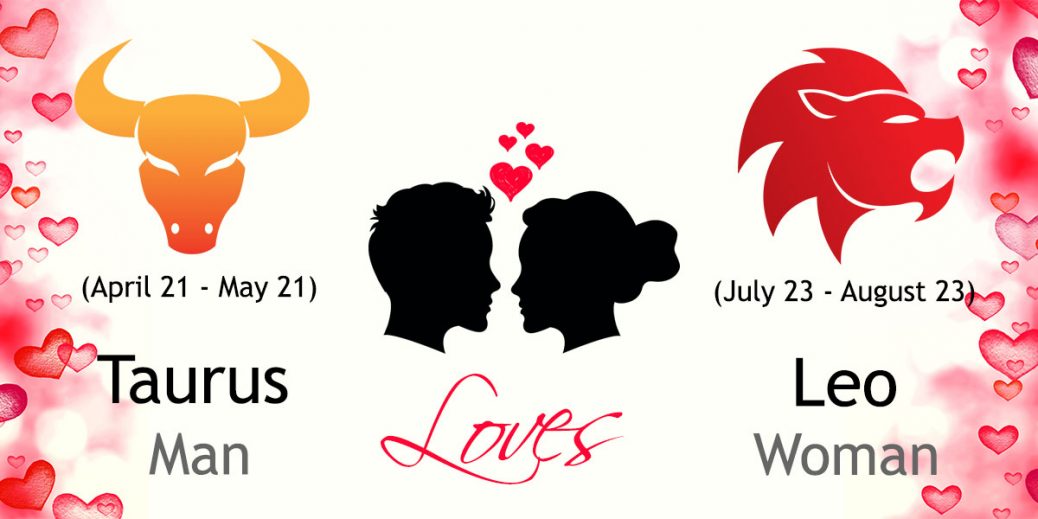 There is an elephant in the room for the two of you. A recent setback is on the Taurus man's mind. You would be better off admitting to a mistake than holding in your secret. The Leo woman is already ready for you to spill the beans and is prepared to forgive if the Taurus man is prepared to be forthright. As a couple, you have power and influence over those around you. A younger couple may be asking you for input or advice so make think through your answer. Make smart decisions that protect your romantic relationship. For each of you, steer clear of obvious vices and temptations though you may be tempted by very different things.

In a love association of Taurus and Leo, each one of them tends to hold on to the relationship strongly. Usually this relationship lasts longer than many others as both of them value loyalty and devotion, and both of them are very capable of giving it to one another.

A Taurus man is basically a calm and composed man who is always ready to take up responsibilities and fulfill his duties with determinations. The hardworking Taurus male believes in reality and is almost always sensible and the even-tempered. He can show brute force and aggression when angered, but this is rare. In a relationship, he needs constant loyalty and affection to assure him that he is being loved and appreciated. Taurus feels comfortable with stability and with that comes modesty and reservation in everything he does. But he is stubborn and his plans and ambitions cannot change for anyone including his lady love.

A Leo woman is a very generous and sophisticated woman with all the beauties of female in her aura. She is a born leader and usually walks smoothly in her surroundings if things are according to her will and needs. She always wants to be on top, in power and in control and also takes full credit on something she only had a minor part in. In a relationship, she feels love and admiration through the constant need of praise and compliments. She respects her Taurus man but at the same time expects same kind of respect from his side.

A Leo woman always makes a proud mate for a Taurus man who loves to admire and care for his lady fair. She upholds the traditional beliefs with determination and clings persistently and with extreme sincerity to these beliefs. She takes pleasure in protecting and showering him with gifts of affection. Since she has quite similar loyalty this makes for warm friendliness and interest causing him to feel content, secure and cared for. She always stands by his side and makes him feel proud of both his and her own progress. She is warm enough to always keep him happy in the relationship. But Leo woman, being the possessor and leader always tends to impose on Taurus man’s loyalty and patience. This can create tiffs and worries among them.

The Taurus man is slow and cautious, disciplined and practical. He has tremendous willpower and self-discipline and keeping it true to the old traditional methods and self reward from personal efforts rather than relying on others to reach his goals. He is one person who makes his Leo female feel great about both in personal and professional life. He fulfills all her financial needs and together with it showers her with a lot of love, praise and devotions woven with thick blankets of care and compassion that she deeply cherishes. She depends on the stable and calm Taurus male to deal with a situation in her life and usually surrenders herself completely in love, but that is just emotionally and not loosing her authority to anyone. However, this loving attitude of Taurus man comes together with his stubbornness and his own authoritative mind where he does not allow anyone to dictate him.

With the grace of love bestowed on the Taurus man and Leo woman, they start listening to each others’ silent and pleading hearts that makes him understand that she only needs love and undivided attention and she realizes that her man craves only for loyalty and devotion. As their relationship strengthens they both become enormously capable of giving and receiving love and making each other feel special in every possible way. As they both walk the path of love with sweet songs welcoming their charming personalities and angels admiring their love, they lose themselves in each other to feels complete in all forms of life and spirits. Their oneness is blessed by Nature and they are such unison of devotion and passion that they actually need no one else once they are together.

The sexual intimacy of Taurus man and Leo woman is one of a kind. He has a very deep and rich taste of sensuality while she has a very strong and passionate flavor of sexuality. He is deeply romantic with his passionate Leo female and is vulnerable to even her sound and scent which stimulates his deep physical desires and make their love making a very fulfilling and pleasurable experience. Both have high demands in the sexual relationship and though his love making is unimaginative but still it is intense and firm enough to make his damsel feel satisfied as a return of which he receives her most royal favors. They both achieve sexual harmony once they are sure of each others’ loyalty and devotion which they usually experience the most through their physical intimacy. There is always an excitement in their physical relationship and they both adore the ways in which they give physical tokens of love to each other making their relationship stronger and more intimate with each passing day. Deep down, Taurus craves all the physical and emotional attention and assurance in the world, yet he does not know how to express this to a lover out loud. The Leo woman is exactly the type to fulfill all of his unspoken desires. She is a wild lioness in bed and is happy to explore all of the physical aspects of sex with him without hesitation, making it a supremely sensual experience.

Being similar in certain areas causes frustration in the relationship of Taurus man and Leo woman. Both feel the need to accept, praise, affection and pats on the head to continuously feel treasured. He needs love and affection, but the self-centered Leo woman is not about to devote herself to such lunacy. She, in turn, craves the same thing but he is stubborn enough to not show any affection if he, himself in not satisfied in the relationship. The last and most important thing he wants is his personal glory and so he rebels against her authoritative attitude. Leo woman’s arrogance against — Taurus man’s stubborn , don’t care attitude — creates the biggest problem in this relationship, but if each is patient and shows a bit of self-sacrifice, their reward will be extreme and harmony will be bestowed.