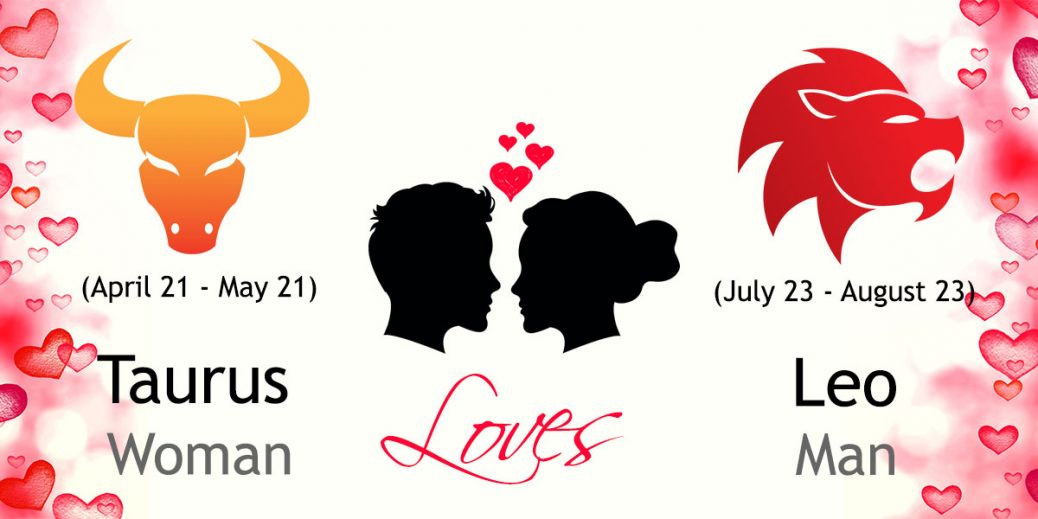 A shift in your daily dynamic is likely as 2022 progresses. One or both of you may be needing a great deal more time apart. The Leo man especially could be reeling from a recent loss of a mentor or father figure. The Taurus woman needs to allow him the time and space to process this loss. There are some things that cannot be immediately put into words. Be confident enough in your partnership to give one another space to grieve. The Taurus woman doesn't need to feel held back though. She can move out into new social networks and connect with those who might help her make a cherished dream into a reality.

The association of Taurus and Leo is a sexually magnetic combination. Both of them look for security in their relationship, and also sense of getting it from their counterpart. Taurus may find Leo somewhat flirtatious and playful, and Leo finds Taurus powerful and strong. They both generally admire each other and deeply cherish their relationship.

The Leo man is outlandish and craves more attention than one person can easily offer him. Living in the spotlight is his ideal, and it makes it hard to do that if he spends too much time indoors at home. He craves all the best that life can afford him, which applies to food and drink, lifestyle, as well as women. In a relationship with Leo constant compliments and adoration are the ways to his heart and the way to keep him around also. Expressing affection matters the most to him which he himself does in plenty and expects to get same from his lady love.

Taurus woman is a wonderful woman with all the qualities of head and heart. She is very independent and matured lady who is generally very calm and loving in nature. In a relationship, the approach of Taurus female towards love and affection is much more practical than it is flowery. She cleans up after her man, cooks him breakfast, and makes sure that life is easy for him as possible, because she is tireless when it comes to providing for the one she loves. But if her actions are not appreciated, she falls into depression and that’s not fun to be witnessed.

A Taurus woman is more than happy to spoil her Leo man with all the comforts that life can afford him, and this definitely leads him to taking advantage of a good situation. She respects him a lot and is completely devoted to him with all her heart. She provides a very compassionate and supportive mate to the Leo man making his life smoother and better in every possible way. They both are hard workers, but he places a lot of importance on having sufficient time to play and she may find herself resenting this. He is also very extravagant with money, throwing hundreds of dollars away on fine dining and possessions he does not really need. To Taurus woman, witnessing this is almost like a torture. Nevertheless, still both the Taurus woman and Leo man has an undeniable respect for one another.

The Leo man is a mate who is normally prepared to provide luxury for his Taurus lady, which she appreciates a lot as she herself is an admirer of good taste and luxuries. He is very romantic in nature and is likely to compose prose or sing praises about his lady fair showing his adoration. He defends his lady fiercely and eases out all her pains whether physical or emotional with his love and care. But his over excitement makes her feel like he’s either immature or not entirely serious about the relationship. They can both be seriously stubborn and may find themselves degenerating into constant nitpicking and arguments. If Leo man can himself be a bit more humble, he can find a lasting and satisfying partner in Taurus woman.

The duo of Taurus woman and Leo man is a true deity of romance and passion. Their love is stronger than iron and smoother than silk. They have a very deep bond of compassion and respect which enriches their relationship with such magic that lasts for their life time. No matter how many obstacles they may face in achieving emotional harmony and experiencing unconditional love, these two lovers stand by each other and comfort their needs with the true affection and sympathy. The love’s most enduring song is played by their oneness as they discover the real meaning of love in their unison. The clouds bring tinkling drops of affection for them and sunshine brings ray of happiness that last with them till eternity.

The physical intimacy plays the most important role in the relationship of Taurus woman and Leo man as when these two are faced with a serious argument, the most efficient way for them to resolve the issue is by hopping into bed and engaging in some hot and passionate make-up sex. He may try to talk his way out of a problem for hours at a time, but this is not going to work on her. She senses primarily through the five senses, and in order to feel loved she needs to be physically shown instead of verbally told. Luckily, he has no problem illustrating his love in a physical form, and can go to great lengths to satisfy his Taurus woman’s sexual needs. He is passionate and demonstrative, and his instinctive role as “king” makes it natural for him to make his partner feel like a “queen”. She just continues to quiver and quake with such passion and pleasure and might not be able to provide him with the verbal approval that he desires after the fact, but this is a great pairing as far as the strictly physical goes.

The threats to the relationship are many but still there are chances to look over them and have a better life. The Leo man likes to go out on the town and parade around a bit, always craving a little more attention and stimulating experience than he already has. Taurus women are reluctant to spend too much time running around outdoors, preferring the comfort of their own home to anything that the world beyond it can offer. He can spend exorbitant amounts of cash while he’s out having his fun, and she resents this, believing that he should be saving the money for their future together. Despite all the bickering and disagreements that may come into this relationship, the two have so much respect and affection for each other that they stand a good chance of overcoming their issues. If Taurus is patient enough, which she likely will be, Leo may have the time he needs to grow up a bit.