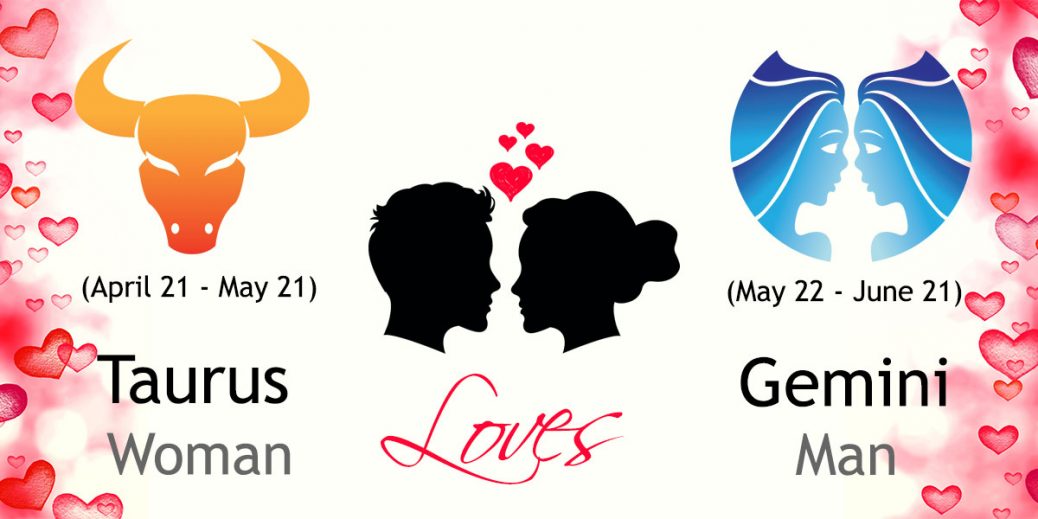 A father figure or mentor of the Gemini man plays a pivotal role in the 2021. One or both of you could have the opportunity to travel which would be advantageous in exposing you to new ideas and systems of belief. If you are traveling, be aware that complications could arise, including restrictions or accidents. The Taurus woman is intensely focused on professional goals and feels close to a major break through or promotion. As a couple, be aware that there may be not skirting family complications. A relative's recent poor decision could have wide reaching consequences that pull the two of you in. Work through the stress together and you'll be stronger for it.

In a relationship of Gemini and Taurus, if the woman is Taurus then definitely the relationship is easier to follow on. There is always a strong pull between these two and they instantly get connected. Though, to keep up the relationship, large efforts are needed from both the sides.

A Gemini man possesses a sharp, inventive mind that is able to perceive all sorts of interesting facts about people. His interests range far and wide, and he may find himself skipping from one thing to the next to keep him mentally stimulated. In a relationship with Taurus woman, he can often find himself bored of her stable and consistent nature, though this may not lead to infidelity, it could lead him for looking around a bit with a wandering eye. Possessiveness and suspicions really get under his skin, and quickly sends him on his way.

Basically a Taurus woman is consistent and always appears to be a patient and stable sweetheart but occasionally she can be moody and broody when she is discouraged or full of rage or when she is pushed past her limit. She excels in the home, where she creates a beautiful and neat environment and whips up amazing meals and baked goods. In a relationship with a Gemini man, she respects her mate and expects him to do the same with sincerity. Her heavy sensuality is her most seductive quality, and serves as a nice surprise to her Gemini male.

In the relationship of Taurus woman and Gemini man, the Taurus is most likely to closely attach to her Gemini man. While he enjoys her companionship very much, he is simply not of the mindset of finding that one right person to spend his life with but in a long run, she is one lady who suits well to his needs. But he is in no rush to make it happen quickly and would rather wait for the things to develop on their own out of sheer enjoyment. But for her, a relationship cannot be developed without looking far into the future and she does not care to waste time on simply learning new things from a slew of lovers. If she is in a relationship, it is because she believes there is hope of it lasting forever and for this she holds in her Gemini man strongly in the relationship.

The Gemini man shows one side of his personality one day and then shift into another personality the next. This creates a lot of excitement and curiousness in Taurus woman, keeping her around him. They are both initially intrigued by the other because they are so different from each other. She likes to make plans in advance and then stick to them like glue, but he prefers to take things as they come and may change his mind about something at any instant. The Gemini man, who is quite adaptable, may indulge his Taurus female by remaining as consistent as possible around him, but that just means that his other side is running a muck when he is away from her. She wants to possess all and not just a part of him, which requires adaptation on the part of both of them.

As with the time the relationship of the Taurus woman and Gemini man becomes flowery and stable, he learns to be around his Taurus damsel and learn a lot more romance in his life. There is always a lot of freshness in their relationship as the imagination power and twinkling ideas of Gemini male brings a lot of newness to their togetherness and these new ideas are beautifully nurtured by the his devoted Taurus woman. She now knows how to keep him around her with her gracious attitude and he now understands how to make her feel secure and comfortable. Their mutual powerful projection creates a strong unison and finally they both blend one in one single dream, that they live best to with each other.

When the Air and Earth try to blend physically, the Earth needs Air but Air loves to flow freely. Therefore, the Gemini man has a much more casual approach to sex than most men do, which can be a particularly bothersome problem from the Taurus woman, who needs a strong physical expression which is both rich and passionate. His form of showing affection comes out in a lighthearted verbal way, but Taurus places a lot more importance on being physically shown than told. He adds imaginative ways and she adds total experience to their love making trying to make it a fulfilling experience. She might imply, through subtle cues that she desires to possess him, that she wants him to be her very own. This is a fundamental turn-off to him, and may make the sheets feel shiver cold at the end of a session. He may respond to her possessiveness by suddenly pulling away or showing interest in others, which hurts her almost beyond repair. The implications behind their sexual behaviors may show them that their relationship goals are quite different.

The relationship of the Taurus woman and Gemini man is more a friendly one than a passionate bond as he takes everything in a lighter way. He has shallowness in his expression of love; moreover he is always in a mood to move a round. This is a very disturbing fact for her who seeks stability in each aspect of her life. On the other hand he finds her, stagnant and a lot more possessive than he can hold on. She have to let go of some of the control she’s accustomed to if she truly wants to make things work with her Gemini lover. He may relinquish half of himself to her, but that’s about the most that she is going to get from this man. If she can help him look ahead a bit, and if he can show her to live in the now a little more, then this pairing may have brighter chances.