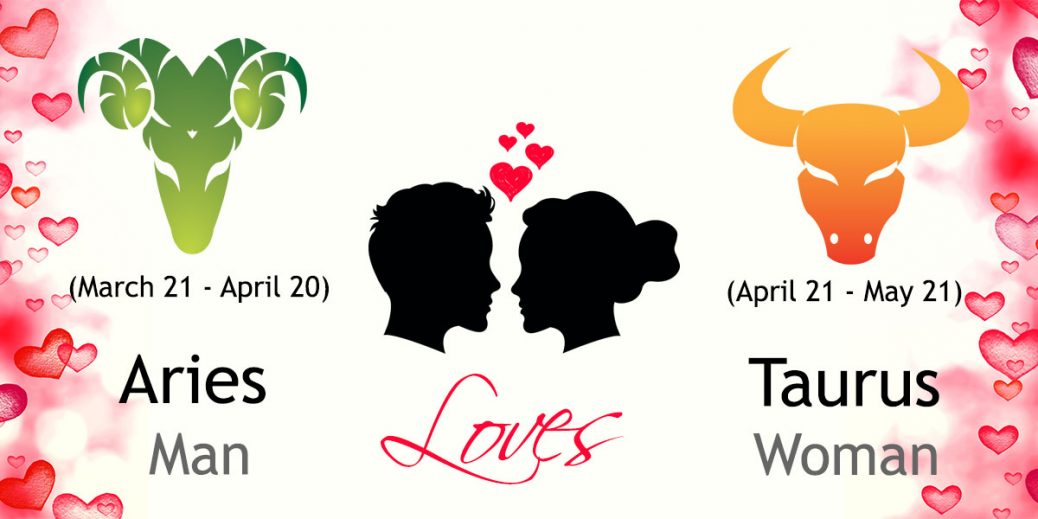 The plans you two have set for travel or change are nearly in full effect. You are both amped and ready to go but you may find that it isn't quite that simple. Accidents are possible or theft if you are not careful in a crowd. The Taurus woman needs to curb the tendency to overpack.The Aries man should safeguard valued belongings. In whatever social setting the two of you find yourselves in, you will discover you easily influence those around you. Being in crowds energizes you both but make some alone time a priority too. Don't lose sights of a plan you crafted together. Talk next steps to make it a reality.

For the innocent Aries soul love is a demand and needs repeated reassurance. While the evolving Taurus soul knows the worth of loves and believes in both giving and receiving love. When these two signs fall for each other, Aries desire instant gratification in love, while Taurus takes things slowly.

Bursting with much creative energy, delightful smile and passionate ideas, an Aries man is extremely attention grabbing at any of the social gatherings that he attends. His youthful aura and confident personality makes him outshine most of the men around him but at the same time his impatient nature and carefree attitude can cause hitches. He is never a promoter of duplicity and he speaks out his mind both at professional as well as personal level. When in love, he is one of a kind passionate lover with burning interest in every aspect of his lady love. But his passion can show traces of jealousy and obsession if not responded lovingly.

The elegant Taurus woman is chock-full with both moral and emotional courage and turns out to be a fantastic homemaker. She has an unmatchable patience and gracious tendency to deal with people. Her cuisines always taste right with best of neatness around her home. But at the same time a she is clever enough to talk on intellectual subjects and pursue her own career. She loves with a determination and sticks to the relationship till the end with all the honesty. But she may not match up with Aries steps and can turn outrageous if bullied to do so.

Being in love with the calm Taurus woman can give Aries man a sense of stability in his life. Moreover she looks around for the real man and will proudly gaze at him as the chief in all the aspects of life including the relationship. Her exotic fragrances and superior feminine behavior keeps your spirit stirred beautifully in bright days and her patience provides you with a good listener for the gray nights to sooth away your worries. The peace-loving Taurus woman looks for harmony in her environment, but to him it may appear to be monotonous at times. But this can turn out to be a very passionate pairing, and you are likely to be the aggressor in this relationship. Avoid undue disturbances and noises as that can make her furious and spoil the flavor of your relationship.

If you are looking out for an alpha male who can respect your Taurus intellect and feminine grace at the same time then you are definitely in the right relationship. Aries is one man who can provide her with both comfort and passionate love for the lifetime. He will appreciate your talents, be by your side in all ups and downs of life and provide you with an inspiring partner. Your Aries man always have an interest in your life and is ready to share his world equally but don’t dare to interfere or tiptoe his decisions. Just be on his side and enjoy your position of the most important person in his life. Stubbornness and clashes of will are more than likely to shower Aries-Taurus relationship with some bruises but avoid your Taurus rage and fulfill the desires of your Aries man.

When in deep love these two signs create a miracle of togetherness that lasts forever irrespective of their differences in attitude. Aries man makes the charming Taurus woman blush with his sweet silly acts and she gives him the immense devotion he has been craving for since his childhood. She makes him more relaxed and patient and he makes her more assertive and daring. His masculine nature and her feminine nature works just so well as a comet striking across the night sky and little bells making that lovely tinkling sound. The purity of their emotions creates an eternity of compassion where they loose themselves for the life time to be in unison forever. The tenderness of their oneness makes their relationship a fairy tale romance where they live happily ever after …

The physical intimacy between an Aries man and a Taurus woman is cozily filling. Though she is not very sensual in her act but she has deep emotional wells inside her that can “turn on” her romantic side when in the arms of a passionate Aries man. She actually likes when her body excites him and his cravings for her. He showcases intense passion during lovemaking, which cannot be well understood by her. She finds it very hard to ratify the idea of perfect romance followed by the Aries man, but despite this they are able to share a magnificent physical chemistry. She truly enjoys when he wraps her hair around his arms and starts to lose control with affection and intimacy. To him this moment feels like tightening of muscles and sometimes he resists as he becomes her slave during love making. Still he can find the much needed peace of mind when he is in a relationship with her because she knows how to respond to his gestures. Even though he is satisfied in the physical relationship, he wants him to get a little creative when it comes to lovemaking.

Though there is an instant connection between the Aries man and Taurus woman yet they have to travel through certain bumpy roads to achieve a cherished relationship. Aries are innocent and courageous but their thoughtlessness and impulsive reactions can make any Taurus outrageous who suffer from lack of reasoning. But at the same time Taurus are very patient creatures so the day can be saved for the couple. Both the Aries and Taurus share the common traits of possessiveness and unmatchable loyalty. So to make the relationship a pearl embossed amorousness there is a need to give visible proofs and flavors of love and devotion and have great communication.