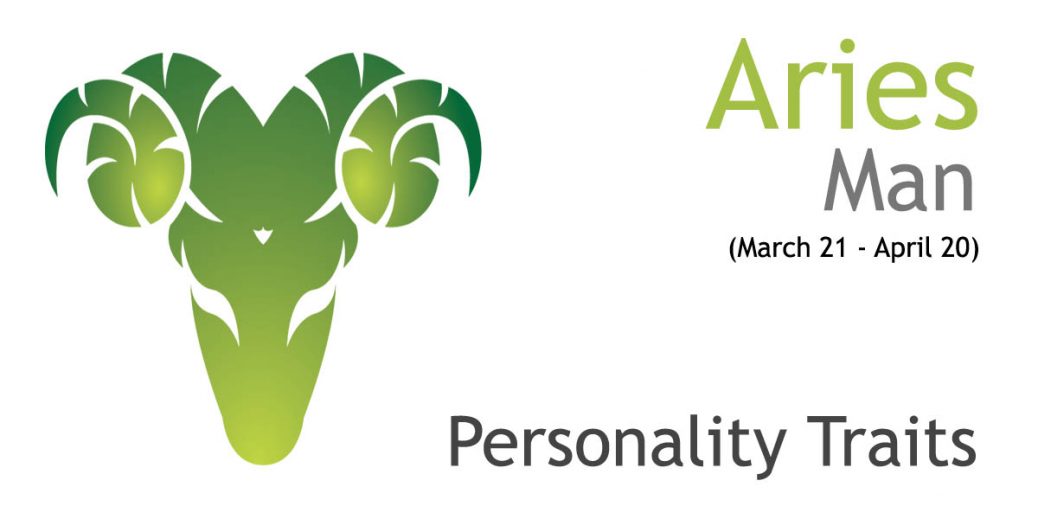 Bold, impulsive, and incredibly impatient, the Aries man is a driven trailblazer and will always be ready to try something new, given his child-like curiosity and creative mind. He won’t hesitate to dive headfirst into the most challenging situations since he thrives on spontaneity. As the first sign of the zodiac, the Aries man wants to always take the lead and has a zest for life, and natural optimism that’s very compelling. To give you a better sense of how this zodiac thinks, feels, and acts, here’s all you need to know about the Aries man.

Personality Traits of the Aries Man

Distinctively impulsive, the Aries man is ruled by the planet Mars and is a fiery combination of energy and combat. Subtlety is not one of his strongest traits, especially since he can be both brash and outspoken. Owing to his intrinsic childlike demeanor, he will showcase a restless, passionate and inquisitive nature towards anything that’s new.

The Aries man has a competitive streak with a strong impulse to explore his limits and bring out a sense of adventure in every activity. Being proactive comes naturally especially since his athletic nature has an affinity for sports.

The motto ‘go big or go home’ works in synergy with an Aries man who is notoriously obstinate when it comes to pursuing a love interest. He seeks a partner who can shuffle between being a lover and an active companion.

Being a cardinal zodiac, the Aries man is a born leader with a pioneering appeal that is confident and motivating. He is a productive and efficient leader since he brings new ideas to the table and will be relentless in his practice. He is extremely ambitious, so it isn’t surprising that he will strive to achieve what is most difficult at hand.

Free-spirited, the Aries man has an independent approach with the ability to rise to a challenge and tackle a problem head-on. His ultra-resilient mechanism stems from childhood and is, therefore, one of the bravest signs in the zodiac. This man will be honest, direct, and straightforward in his interactions and can often be a bit bossy.

Eager to learn new things, the Aries man can hold a conversation especially if it piques his interest. He is spontaneous and will be frank about his opinions just like a young child, but can also be wistful and self-centered in his mannerisms. He enjoys verbal sparring and will never hesitate to put forth his beliefs.

Rarely the kind to sit along the sidelines, the Aries man is all about the thrill of the chase so he easily gets turned on by a woman who’s playful, adventurous, and can speak her mind clearly. You can compliment his physique, achievements and indulge in intellectual conversations to stimulate his mind. And since the Aries man prefers being upfront, he will naturally be attracted to a woman’s naked candidness, preferring a partner who’s passionate and lively.

Mundane routines can put off the Aries man, so he quickly gets bored if there’s little activity involved in his relationship. Despite the fact that he enjoys a friendly debate, he certainly won’t tolerate criticism. Since the Aries man is frank and loyal, trying to make him jealous will not end well for anyone. This zodiac is brutally honest and will quickly lose interest if there’s deception involved of any kind or consistent emotional confrontations.

Dark sides of an Aries Man

An Aries man pays heed to a life that’s very much his own and will remain preoccupied in his own world. He doesn’t have a cunning mind and will move about with confident absolution often disarming individuals with his child-like innocence. This man has a quick temper and when confronted, he can become extremely argumentative with an ego that can surface on several occasions. He is impatient and will not persevere long enough often finding it hard to empathize hence can be quite insensitive at times.

Underneath all the bravado, an Aries man possesses a childlike naivety that often clouds his judgments and he ends up with hurt feelings. Since he is intense and combative, he needs a creative outlet to vent off so vigorous exercise regimes are a useful way to blow off the steam. To be around an Aries man, you’ll need to have thick skin since he is headstrong and can often be intimidating. If encouraged consistently, he will listen to you but don’t look for tact, humility, or subtlety with this zodiac.

How to Attract an Aries Man?

If you’ve set your heart on an Aries man, then you should know that this zodiac will not be easy to tame by just exchanging common pleasantries. Here’s what you can do to catch his attention –

Be open to spontaneous activities

The element of surprise keeps the Aries man hooked especially if you’re making last-minute plans, or simply being creative in the bedroom. Since this zodiac easily gets bored with routine, you should consistently present him with new challenges that are both energetic and adventurous.

The Aries man prefers women who are feminine and can carry a sophisticated flair wherever they go. Dressing up and taking care of yourself will always work for this zodiac especially if you include those date nights with playful banter. Engage him in intelligent conversations that consist of witty comebacks to keep your romance flowing.

Pay attention to the little details

If you’re already interacting with an Aries man, you should know they like to be heard so it is necessary to pay attention to detail. Apart from keeping his adrenaline pumping, taking the direct approach with him ensures open communication. Don’t undermine his authority because he likes to call the shots despite respecting a woman’s independence.

Be assertive and self-respecting

An Aries man will be attracted to a woman who is decisive, free-spirited, and can take care of herself with little assistance. He won’t hold back while expressing himself, and he expects the same honesty and openness from you. A woman who is assertive, vivacious, and impeccably groomed will be favored by this zodiac.

Shoot straight from the heart

Being manipulative or indirect will not end well with the Aries man who can see right through a dishonest façade. He shies away from women who are demanding and controlling, so it is important to give him space when he needs it most. Since he dislikes romantic pretense, you should just be honest about your feelings.

Be gentle and hear him out

Arguing with an Aries man isn’t so easy since he always wants to do things his way so you’ll need to be passive and maintain a calm composure. Be patient around him because he won’t take criticism so easily; therefore it is necessary to be subtle while putting across your perspective and opinions.

Trust him with your vulnerable side

The Aries man enjoys being the knight in shining armor as long as the woman has integrity. Showing him a vulnerable side to your personality will bring out his inner instincts to protect and care for you. Talking and solving your problems every now and then is his way of being present in your life, you can show your appreciation by heeding his advice.

Try not to be fickle-minded

Since the Aries man is a trendy spirit, with the most awe-inspiring milestones, it isn’t a surprise that he prefers women who are confident and determined.

10 Signs an Aries Man Likes You

Being a leadership-driven zodiac, the Aries man puts all his efforts into impressing everyone and is a believer in rituals. He is possessive of his siblings, and will often instill upon an opinion in their life choices. The Aries man will remain law-abiding and is fearful of government authorities so he ensures his family always remain safe. In a relationship, this man will remain loyal and dedicated, and if you can handle his dynamic temperaments, your family life will remain calm and balanced. He likes keeping good relations with his family, in-laws, siblings, teachers, and friends. As a father, the Aries man is protective and authoritative but is a generous provider for his family. He will guide his children to become high-end achievers and this often means he can be dominating and pushy.

Aries men are known for making bold and risky decisions when it comes to their investments. Known to be a spendthrift, the Aries man finds it hard to maintain a stable bank balance and more often makes poor financial decisions without consulting experts.

An Aries man in bed is not for the faint-hearted especially when they possess a heightened sense of passion. Filled with sexual energy, an Aries man will envision a hundred intimate scenarios with you right from doggy style to riding him senseless. Treat the Aries man with intellectual debates, striptease, and dirty talks. Incredibly impulsive, sex with an Aries man needs to be playful, bold, and spontaneous.

You’ll witness a dynamic display of power from an Aries man, and what turns them on the most is the freedom to dominate. The next thing you know, you’ll be tied to the bed as the Aries man ravishes your body with utmost enthusiasm. An Aries man in bed is a ravenous sexual partner who thrives on bold gestures, and kinky adult games. A bit of role-playing will have an Aries man tugging at your panties before you can even say ‘please’.

An Aries man is impatient and blunt when it comes to sex, never hesitant to hit you in all your sweetest spots as you try multiple positions. An Aries man in bed will not be mundane in his attempts to please you. Envious and quick to judge, this zodiac will only want to whisk you away from the crowd because of his possessive nature.

An Aries man will be hard-pressed to deliver his woman a stimulating sexual experience as long as she is assertive to his independence and is fiercely loyal. Aries men are selfish and self-oriented in bed, focusing entirely on getting maximum self-pleasure. So being blunt is your safest bet because you’ll be driven crazy once he decides to give you some sweet pleasure.

How to Resolve Differences with an Aries Man?

Aries men are unpredictable beings and will pursue another without hesitation since they’re impatient and insecure. Don’t let his excitement deflate over time, so plan the occasional date night with a tad bit of spice, all the while stroking his ego. Patience with this zodiac is necessary since he can be very arrogant, and positive criticism will only be appreciated if you’re subtle enough. You will rarely find him low on energy, so active participation in his spontaneous endeavors will improve your relationship tremendously.

A relationship with an Aries man is similar to parenting a toddler, and as an archetypal Ram, butting heads with them will often strike discord. To have a blissful relationship with the Aries man, support his endeavors, encourage him to persevere through every task, and exchange creative propositions with him.