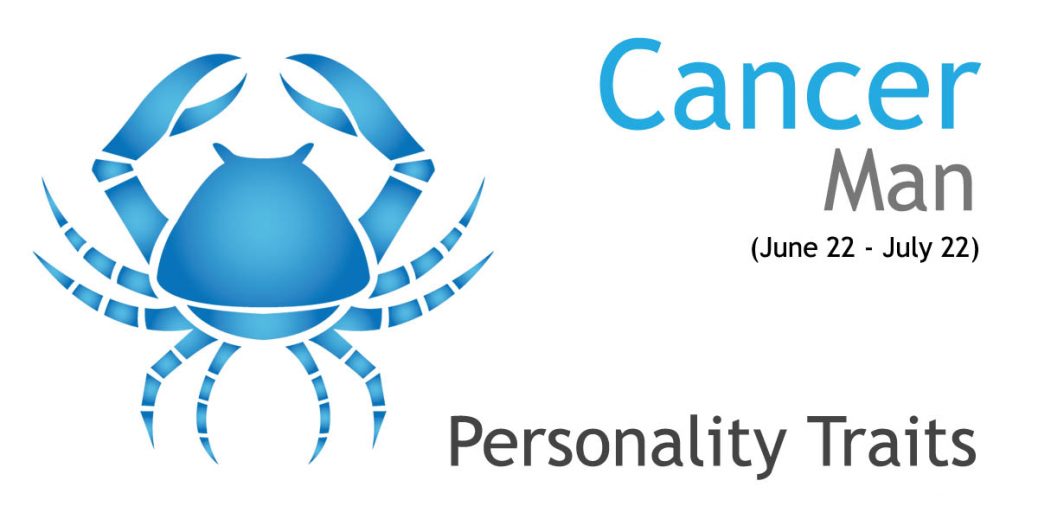 Emotionally sensitive, and deeply passionate, the Cancer man is a gentle soul who believes in shared responsibilities. His emotional strength and volatility give him an attractive charm and he has a natural talent for nurturing people around him. Incredibly intuitive, the Cancer man is ruled by the Moon and will be prone to mood swings every now and then. Harboring a keen sense of humor, here’s all you need to know about the Cancer man.

Personality Traits of the Cancer Man

Incredibly loyal as a friend and a partner, the Cancer man is a poetic knight who is sentimental and chivalrous everywhere he goes. Known as the caretaker, he will likely be soft-spoken who’s notoriously in touch with his emotions. He makes for a great listener, and will often portray an interest in learning more about your life. Cancer men have a small inner circle of friends they’re most susceptible towards, but they are reliable with an upright sense of honor.

Known to be a bit of a traditionalist, the Cancer man is conservative in his views and principles. But that doesn’t mean he won’t blend in with a crowd, it is simply that he chooses to observe from afar. Incredibly temperamental, he will be a backseat drive and can often nitpick since he believes those old school methodologies provide sanctuary. Despite having a quiet demeanor, the Cancer man loves consistency and routine since it keeps his insecurities at bay.

Kind and compassionate, the Cancer man is always in tune with his emotional faculties especially since his heart and soul depend entirely upon knitting long-lasting bonds. He will be supportive and protective of those he loves and will roar into action if they are threatened. He remains vigilant of people around him, with a unique ability to read situations well beforehand and this makes him parent in a group of friends.

You’ll come to realize that the Cancer man has a sharp memory because he likes being diligent in his efforts to maintain relationships that complement his emotional swings. Enriched with family values, the Cancer man is shy and will generally possess an innate distrust of people around him. He is selective about his circle of friends, often masking his reactions in the midst of a verbal debate, and chooses to remain private about his personal matters.

Since he’s sensitive, the Cancer man prefers to be a wisdom collector, who watches and learns from situations, and people around him. The crab is a beautiful mix of intuition, curiosity, and dedication to the things he’s most passionate about. He can hard as nails if his morals are being questioned, and relies heavily on systematic schedules, often taking a scholarly approach while putting forward his perspectives.

Though the Cancer man comes with constantly shifting moods, he is a deep thinker who delves into those subjects that are likely to affect his sentiments. Upright, and intelligent, this man can seem mysterious and complex at times but he feels most motivated in an altruistic lifestyle. This man chooses to invest his time in a career that is meaningful, therefore has an inclination for culinary arts, defense, and medicine.

Dark sides of the Cancer Man

Deeply sensitive, the Cancer man has deep-rooted insecurities that stem from his distrustful nature since he views the world from a cynical perspective. He may be insecure, so actions that can inflame his anxiety will only push him further into his shell. Though he is a family-bound individual, he often forgets to receive criticism outside this den of thoughts. He may appear gloomy or doleful, and quite often will be despondent if his sentiments have suffered a blow.

A relationship that is emotionally dissatisfying can transmute into deep hate for the Cancer man who functions entirely on zealous exchanges. He may brood from time to time, but he is a born romantic who simply needs a bit of coaxing. His personality resonates with that of a child and he will often crave playful affection. The Cancer man won’t embrace change enthusiastically and will often bemoan the loss of the ‘good old days’ but his mood swings remain transient.

The Cancer man feels deeply, and if chooses to open his heart out, will want someone who will nurture and adore his volatile antics. This man is sensitive and incredibly traditional with a soft heart, so he expects loyalty and attention. Kind gestures, a home-cooked meal, and a classic courtship work well with the Cancer man who is a diehard fan of nostalgia and old-school romance.

Since the Cancer man is high-strung and touchy about certain subjects, he dislikes brash and abrasive personalities in general. If a woman is condescending, or consistently tries to play mind games with the Cancer man, then this is the biggest turn-off for this zodiac sign. If you try to treat him like a child, always patronizing and picking at him, this man is likely to lose interest immediately. His attraction is short-lived if a woman is emotionally detached, or is indifferent towards his feelings and sentiments.

How to Attract a Cancer Man?

A cancer man is an aggressive growth seeker. He is actively seeking opportunities – material, mental or spiritual. It is important to understand that to make a Cancer man respect and adore you, bringing value to the table is more than just a necessity.

Cancer men are particular about social etiquettes so they always prefer being with women who are pleasant to talk to, and carry a sophisticated charm. He appreciates inner beauty as much as your outer appearance, especially your mannerisms in public.

Be soft and meek

For a Cancer man, high self-esteem is important however that doesn’t mean he can tolerate brash or loud individuals. He respects a woman who stays firm to her beliefs, but it is best to be reasonable with the crab, instead of throwing a stubborn attitude.

7 Signs the Cancer Man Likes You

A dedicated lover and passionate spouse the Cancer man is a nurturing soul who is defensive and reclusive. Since he is a believer of facts, he will reserve a cynical perspective but if madly in love, he is ready to throw in a commitment that is comfortably ensconced with his deepest emotions, and fears. Dating the Cancer man can seem complex initially since he’s conservative however the crab is a secret keeper who acts on a rulebook and will therefore be a loyal and devoted husband. He can be possessive, with a stubborn nature in the relationship, finding comfort in watching a late-night gig accompanied by long hours of intimate gestures.

His table manners are impeccable, and his first reaction to a proposal will revolve around family ties. The Cancer man is incredibly close to his mother and remains deeply attached to vivid childhood memories. Protective about his personal space, the Cancer man can be the ideal candidate to bring home to your parents. At home, he will want to unwind and enjoy a luxurious home-cooked meal and with his children, he will be stern and vigilant. As a parent, he makes for a doting father, who can be quite apprehensive because of his traditional perspectives, often appearing bossy and authoritative.

Cancer man’s ability to perceive and gauge situations makes him an expert insurance advisor, but may be inclined to studying pure sciences as a researcher. He is not a spendthrift and may often continue his family’s business, only because he’s a stickler for tradition. He can work for continuous cycles before immersing himself in a vacation, and since he’s a philanthropic at heart, being kind and compassionate won’t come as a surprise. Since he’s intent on being financially stable and building a secure home for himself and his spouse, the Cancer man is incredibly smart with his money.

A Cancer man makes for a devoted partner in bed and will be a little apprehensive, but if you shower him with romantic gestures, it’ll be hook, line, and sinker for this man. His desire to please, and charm his woman in bed is intense – think a luxurious massage or a sensual episode of steamy shower sex. Cancer men enjoy witty banter every now and then, but they particularly possess a doting rapture for women who are disciplined, gentle, and giving.

A Cancer man will explore a woman’s body, with soft caresses and tender kisses and what turns him on the most is if you talk dirty and flicker your tongue past his erogenous zones. Always protective of his woman, a Cancer man will remember the littlest things in bed, and won’t mind replaying those comfort moves. What arouses a Cancer man is an affectionate gesture in bed; like a smoldering kiss with lots of hand movement, or a tight embrace that spills wanton desires.

Dating a Cancer man is a mystery that needs to unfold with time, given that he’s prone to mood swings and can often become distant if his pleas are left ignored. Obstinate and contemptuous, a Cancer man doesn’t react well to silent treatments or superficial courtesies and will avoid confrontations despite his afflictions. Prone to overthink every situation, a Cancer man is difficult to entice once he decides to withdraw himself from the bedroom.

How to Resolve Differences with a Cancer Man?

The Cancer man comes with a utilitarian workforce, deep-seated intelligence, and is sensitive enough to detect emotional cues. Always looking for creature comforts, the crab won’t divulge inexpensive investments and will prefer a financially independent partner. His personality is such that he can maintain close relationships with his co-workers, and friends but he likes having control of his personal space. Being receptive to his needs and wants will ensure your relationship thrives especially if there’s a confrontation.

Despite being temperamental and clingy, the Cancer man is a keeper who strives to nurture his relationships with care and dedication. He is highly unpredictable and will often insulate himself within his own stream of thoughts. If you learn to comprehend his mood swings and work towards easing those insecurities, then your relationship will remain harmonious.