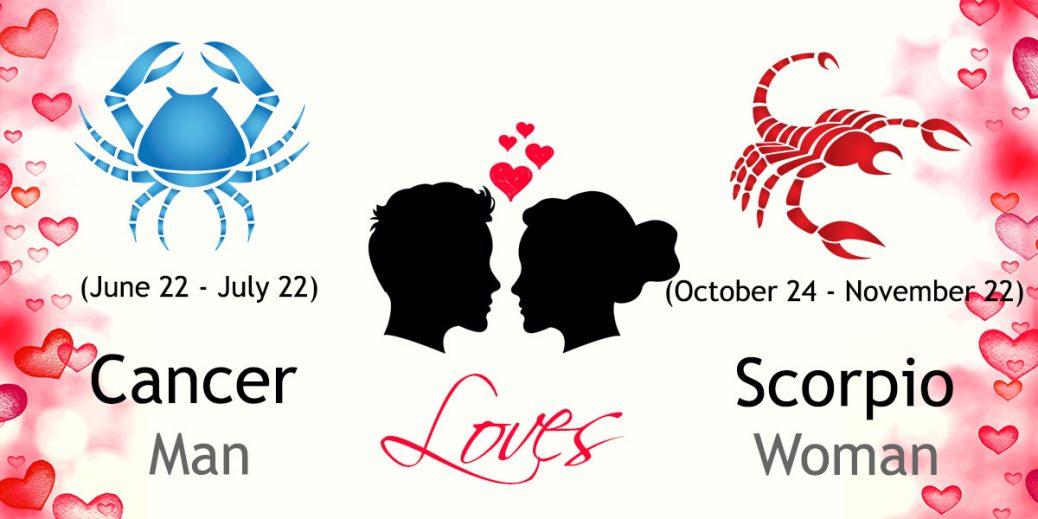 New opportunities that arise in 2022 might demand that the two of you pick between old and new -- jobs, homes, connections. For the Cancer man, leaving a failing work relationship behind could be inevitable. Starting something new is risky but would make you both happier than feeling stuck as you do at present. If you are picking up and moving on to somewhere new, work to part as diplomatically as possible with the contacts you are leaving behind. For the Scorpio woman, look for outlets for your creativity and intelligence. For both of you: remember that you have a lot to offer. Don't let yourselves be pigeon-holed and offer support to one another in this phase of reinvention.

Since both the Cancer and Scorpio are Water signs, they blend well with each other and pair up easily. Both the Cancer and the Scorpio takes commitment seriously, and none of them is frivolous with their romantic feelings and expressions. They both create a strong bond of unlimited passion and compassion.

A Cancer man is very courteous and considerate man with sharp intellect and overwhelming sense of humor. He has the great ability to laugh at things that irk him and he can even laugh at himself showing the ease of his nature. Though his pessimism is depressing but usually he is alert enough to avoid such situations. He has a cautious nature and he tends to think rationally before doing anything. He always proves to be a lot of fun as a lover. He has a streaking sophistication that deeply impresses a Scorpio woman. He is definitely good at earning and saving money but hates wastefulness.

A Scorpio woman is a completely confident woman with magnetic attraction in her personality. She is all woman with seducing beauty and enough glamor to make the heads turn for her. The faith and passion for love comes naturally to her. When in a relationship with Cancer man, she provides a lot of affection both emotionally and physically to make him feel secure. She is a possessive lover and jealousy may arise when she finds other girls around her lover and may even get suspicious at small things.

A Scorpio woman easily attracts a Cancer man with her dazzling personality and charming persona. She is a strong woman with a fragile heart that loves her Cancer male with complete devotion and loyalty. She is an intense lover who makes him feel secure as for the first time he gets a mate who is more devoted and possessive then he himself. She helps him to flourish a career and herself also stand as a woman of substance with a career to be envied. She wonderfully esteems the protective and witty nature of him but her sense of self-importance makes her to dislike jokes aimed towards her. At times she can be viciously suspicious and her fury can give some unforgettable bruises to the sensitive Cancer heart. However, she is generally a very warm lady with generous attitude and passionate display of love.

A Cancer man is one person who can protect the Scorpio woman without making her feel dominated. He has a sensitive nature and makes her a part of his own sensitivity with lots of pampering. He is a faithful lover who always backs his Scorpio female to support her in all ups and downs of life. He always makes his lady love smile and feel assured with his sophisticated sense of humor and dedicated love that he showers on her compassionately. He easily forgives her even when she behaves in a rude way but displays his anxiety if he gets to know that she is hiding something from him. As calm and lovable Cancer male is, he can be sometimes very moody and insecure giving hitches to the Scorpio woman who gets confused on such responses of her man.

As these two Water signs fall for each other, they make a perfect relationship. This couple is tremendously loyal to each other and with increasing confidence in the relationship; their secrecy element dissolves away making them closely attached emotionally, mentally and physically in a complete unison! Together they are likely to have a fabulous relationship along with a flourishing career. The Cancer man makes his charming lady smile with his sense of divine comedy while the Scorpio woman makes her gentleman feel more loved with her immense devotion. As the love between this couple intensifies, they plunge in a never ending stream of affection to be lost forever. Their love becomes warmer than sunshine and cooler than sprinkle to give them a blissful pleasure of oneness. With each passing day their differences melt away making them one soul dwelling in two bodies!

Both, the Cancer man and Scorpio woman enjoy an excellent physical relationship with a great amalgam of Water from cool to warm to hot! The chemistry shared by them can be attributed to the harmony that prevails in the relationship. Once he becomes confident in a relationship, he strongly displays his wildly fervent side. The Cancer man and Scorpio woman can infuse their emotional sides in the physical relationship, and it helps them to have a wholesome relationship where the partners do not compartmentalize sex and emotions separately. He provides strong compassion and she gives thrilling passion to their love- making. Since they are very emotionally attached to each other even during the process of lovemaking, they can experience the joys of a physical relationship with great emotional attachment and sentimental involvement that very few couples can experience. This explains the powerful initial attraction between the two lovers, their pain when separated and their abundant opportunities for reconciliation after a quarrel. At times the sizzling Scorpio woman can take the help of sex in order to manipulate her Cancer man. Sometimes he won’t mind it, but whenever he senses an attack at his basic rights, he would more fiercely repel the tricks played by her.

Though basically the relationship of the cancer man and Scorpio woman is full of love and passion but both of them find it difficult to follow the lead of the other partner and it causes some amount of problem. Both of them nurture secrets well but they both are uncomfortable if their partner hides something from them. He is not as intense as her and this can cause some fissure in the association. The willingness of the Scorpio female to take risks and enter into unknown situations is considered foolish by Cancer male while she finds him less courageous. He may also find her very suspicious while she may find her moody and cold at times. But these problems can be worked out once they both decide to be together because both are strongly determined people with a lot of respect for true love and sincere devotion.