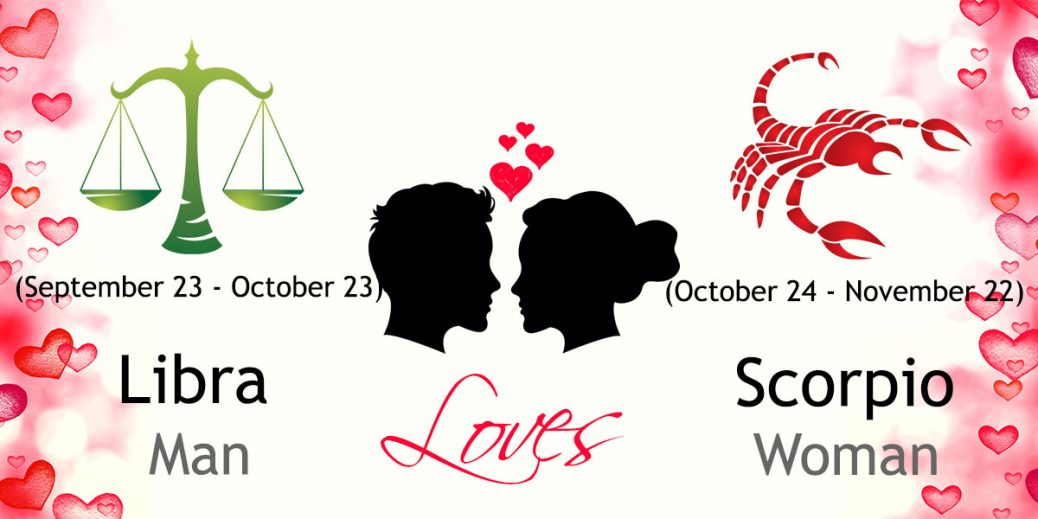 Take some time to get out of your usual groove and enjoy some new settings and experiences as a couple. You could find a romantic atmosphere is an unlikely spot, perhaps via a new sport or group you've joined that brings you together in a new way and helps you newly appreciate one another. The Scorpio woman is abuzz with feeling, for spirituality, for romance, for creative pursuits. The Libra man can be encourage and a good listener when new ideas are shared. As a pair, seize an exciting opportunity that comes your way. It would be a welcome break from the stress of recent days. Draw on your collective intellect and creativity to make something new happen that excites you both.

Libra and Scorpio are beautifully attracted to each other due to the qualities they possess. The luminous energy of Libra and strong intensity of Scorpio stands in stark contrast but makes the relationship proactive. Scorpio wants soul in love relationship while Libra is most interested in companionship and outward expressions of togetherness.

Libra man is much more sensitive and yielding than most men. He hides his passions well behind a debonair smile and a persuasive voice. He is a great orator with answer to almost every question of the world. He keeps his distance while analyzing others around him. His delicacy allows him to feel pain in his heart much quickly. He is a romantic and extremely charming and can pretty much get any woman he wants to with just a flash of his warm and natural smile. Once he captures a woman’s heart, she becomes a die hard lover for him.

Scorpio woman is strong, independent and her beauty exudes through her qualities and magnetism. She hides the truth more often than not, often giving a different meaning to mask what it is she is trying to hide. She appear to be drawn back but it is a mere act, actually her silence is her mystery. It creates a magnetism that attracts others to her. Although Scorpio woman always wants to dominate any relationship, whether in business or in love, she holds back, temporarily so as to let her companion control the relationship in the beginning and then take over with time.

A Scorpio woman is a wonderful woman who easily attracts Libra man by her mysterious beauty and magnetism. Moreover, her intensity to love and her loyalty is unmatched which makes the Libra man fall for her even more quickly. She has an aura that makes her man feel great about having her in his life. She respects him a lot and considers him to be the most important person in her life. Normally, she is extremely patient and helps him through his many mood swings. But for that he has to pay a price because love of a Scorpio woman never comes without price. She demands equally intense loyalty and love from him and respect which she strongly feel he should owe for her. If not treated well she can turn into one of the most dangerous and revengeful woman.

Libra man has an innate ability to attract any woman he wants and even Scorpio woman is allured by his charm. But she gets to know just how sincere or playful he is being with her. She knows if he is just toying with her or if he is sincerely interested in her. Whether she chooses to act on her Libra male’s less than noble antics is her decision. Their ability to debate with one another is high on the roster and they can spend huge amounts of time doing so. It can end quite abruptly, however, when Scorpio woman is tired of it all. But he is also one person who gives her the most romantic relationship of all. He respects and honors her and appreciates her intellect. He gives her a new airy approach towards life which makes her feel light and easy breaking all the boundaries around her.

Libra man’s unconquerable optimism along with the strong intensity of the Scorpio woman, strikes a perfect chord. He has the potency and compassion she needs, while he adores her innocuous nature. As they deeply discover the miracles of bonding, she starts giving the Libra man the peace he needs, this also helps her to calm her jealousy and suspicious nature. Likewise he is always ready to provide his lovely maiden the excitement she needs, this shakes him from lethargy and bring more colors to his life too. Their true love is a sacred flame. That burns eternally and none can dim its special glow or change its destiny. The love of Scorpio woman and Libra man speaks in tender tones and hears with gentle ear. They give affection and trust to each other with open heart, conquering all their fears and intertwining their hearts forever.

The sexual relationship of Scorpio woman and Libra man is on a higher level. Scorpio woman has a deep sexual passion that needs to be expressed. She enjoys showing Libra man that his normally superficial sexual nature is not enough for him. He soon realizes that his libido matches hers and the ecstasy created is more than satisfying. He is vulnerable and sentimental as well as extremely romantic and affectionate. Their passion for each other drives them to places they thought only dreams could come from. Their love and desire touches their body and soul making them complete only in each other’s arms. She loves these qualities in him. Her need to possess him completely is fulfilled initially but when he makes her realize that love making is so much more than that, they reach an even higher level of intimacy. Scorpio woman’s relationship between sexuality and spirituality is a very strong bonded one. This haunts Libra man and touches him deeply creating an even closer connection between them.

To love a Scorpio woman is to be completely devoted to her and have a passion for her that burns deep. To marry a Scorpio female is not to be decided lightly, however. She is intense in what she desires and craves for. Her needs are fierce and she expects complete loyalty from her partner and may not entertain Libra man’s easy going nature. If she so much as suspects differently, he can rest assured she will show her anger and her jealousy. It is not to be a passing argument, so do not expect it to just blow over. Her torn heart enrages her and she gets her revenge on her man. To create a strong bond between Libra man and Scorpio woman, they need to suppress their egos somewhat and learn to adjust to the others needs and desires. An enormous amount of loyalty and devotion is needed but the results are sexually and spiritually heightened many times over.