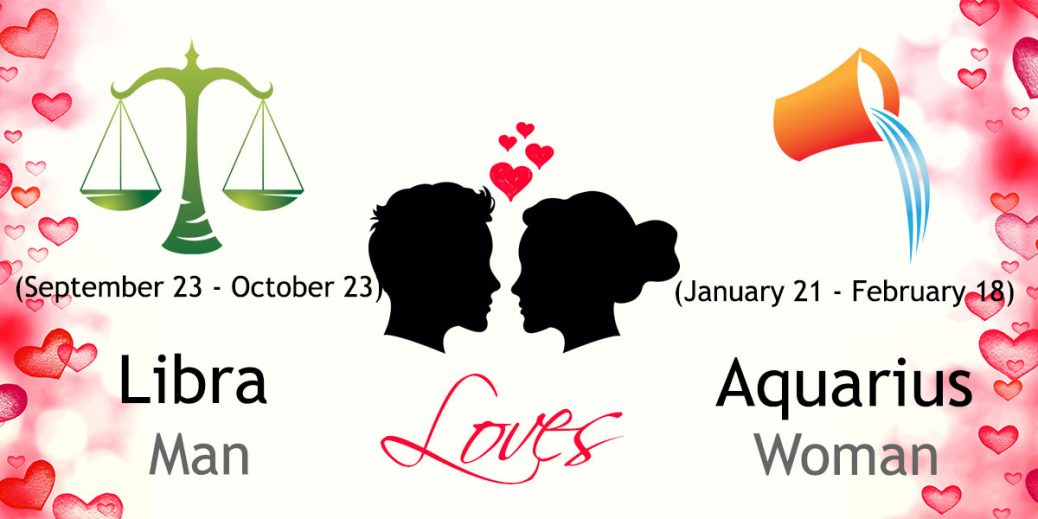 Travel plans may have to wait as together as a couple you sort through some litigation or family dispute. Keep a level head, even if you are feeling stress. Nothing will be solved by squabbling among yourselves. The two of you feel isolated from those who normally populate your world as friends and coworkers engage in festivities and gala. The Aquarius woman may be feeling the pressure to choose sides but staying neutral would be best. You can help each other cope better with the stress of countless days and nights if you both just take time talking and listening.

This is one of the easiest relationships for both Libra and Aquarius. Each of them places a high value on sharing ideas with the partner, which can be a major source of common ground and strong foundation. Communication flows between them beautifully as they both understand what the other person means.

Libra man is quite the outbound and sociable creature. He hides his passions well behind an elegant smile and a convincing voice. He is a great orator with answer to almost every question of the world. He keeps his distance while analyzing others around him. He is not as innocent as he may seem but he is a gentle soul who hates to do injustice to anyone. He likes to maintain a balance in everything he does and that includes love too. In a romantic relationship, he proves to be a great lover as he is no less than synonym to romance.

An Aquarius woman is as adorable as can be. She relishes and adores a good friendship and gives to it just what she expects to get in return. Her values run high and she believes in compliments, true promises and loyalty. She goes through life appearing detached and not very emotional about anything but she is a very committed person. She is not at all materialistic in any way. In fact, a simple romantic gesture gets her every time. She is as cuddly and affectionate as a teddy bear and accepts the faults of her partner as long as he does so in return.

The relationship that builds between Libra man and Aquarius woman is one between intellectual thoughts and logical ideals. Romance flourishes as they discover and explore each other. They listen well to each other and build a foundation of trust and companionship between them. Even though Libra man labels such a bond as romantic as she tries to appear to push such ideals away, they actually do have the same aspects in mind for love. As Aquarius female falls into a pacifying mood, instead of being happy and settling down into this, he tends to push her for answers to questions that trouble him. He becomes angry without taking her feelings and affections into consideration and this leads to trouble in paradise. However, after some time passes, they most likely get back together and form the old familiar alliance that makes them happy to be in each others company again.

Libra man is a good match for Aquarius woman. His gentle and clever nature appeases her when it comes to dealing with disagreements. He has a way of pacifying her with little effort on his part, even though it is not so effortless when it comes to his own mind. He is quite lovable and nurturing when things are mild and easy. He needs a calm and tranquil lifestyle to maintain a positive and healthy person. He works himself to death trying to impress people, trying to make them like him and worrying about getting everything done that needs to get done. But if his Aquarius lady upsets him, he becomes cold and cranky. He becomes somewhat careless and his loving manner turns mean and wicked as she becomes more unpredictable and such situation can spoil relationship. She should try to bring a sense of calm to the relationship and know enough to leave him alone when he needs to recompose himself after such a breakdown.

On the wings of commitment, their love flies; soaring higher and higher, and touching the skies! With every sweet sunrise and every soft morning breeze they have a brand new day to celebrate their togetherness. The strong shoulder she gets and the sensitive touch he feels; keeps them together with the assurance of support in every step of life. It is very possible for these two to keep each other happy for a lifetime with their sentiments and deep affection towards one another. They can walk miles quietly in silence admiring each other’s efforts or deeply cherishing their dreams and planning things to fulfill them. They embrace each other with wings of love and hold deep within their souls to fly to another dimension where there is only love and passion.

For a fulfilling sexual relationship, Libra man and Aquarius woman should keep things light and respectful. Aggression and dominance does not go over well with this kind of bond. When they are both on the same level, they both are in perfect harmony to the beautiful music of a gentle and delicate intimacy. Because they are both so easily hurt by one another due to the enormity of love they give, the fragile equilibrium of their sexual intimacies must be dealt with carefully. Even though Aquarius woman is quick to forgive, the healing process has to have time to be completed in order to balance the forces that drive them sexually. Also, if she has just won an intellectual battle of the wits, she shouldn’t expect him to want to make love to her any time soon. Libra man is quick to forgive her as well, but there is that healing process again. If the next sexual encounter is too soon after an ego is bruised or an argument is won, it comes across as trying to be a forced bond to which neither Libra man nor Aquarius woman is pleased with. Their best bet after ‘forgive and forget’ is to cuddle, hold hands, little kisses. Being close to one another is good for their relationship.

The relationship between Libra man and Aquarius woman is an extremely emotional and delicate one. There are some incidences that cause minor problems in their lives but those can be taken care of. He always needs his space and peace, especially when he is out of one of his tiring schedules. At such times she is needed to be calm and tender with his feeling rather than showing spunk in every act. On the other hand, Libra man needs to give space to the dream world of his Aquarius woman and doesn’t take her aloofness as a serious issue. The right amount of balance on all sides of the spectrum is needed to keep things flowing sweetly. With this flow, there are deep, heartfelt emotions felt by both lovers and a genuine sincerity they will be able to cherish for a long time. They are easily forgiving of one another and overlook the other flaws with a love deeper than the deepest ocean.