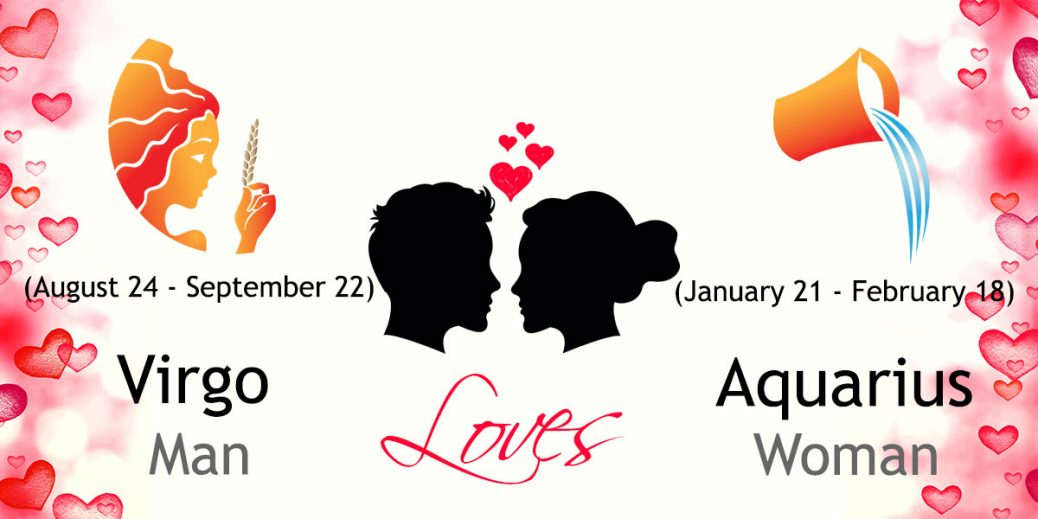 As a couple, you could use a reprieve from your usual social world. Your usual connections, including couple friend, may be causing stress rather than bringing joy or support. Enemies spreading gossip at the Aquarius woman, back bitching and trying to engage the Virgo man in pointless competition leave you both feeling drained. Make time to get away. Have a little overdue TLC as a pair. It's okay to shut the world out a little and find refuge in each other. Set boundaries around the space of your relationship and make sure you enforce them when others are encroaching.

The combination of Virgo and Aquarius is quite a typical one. Aquarius gets off on visions, possibilities, and opportunities while Virgo is most concerned with making a relationship work. Mentally, both might have much to share but their physical aspects and worldly needs are very different from one another.

A Virgo man’s life revolves around himself. He is very analytical and pessimistic and expects perfection from those who surrounds him. He spends a lot of time pointing out the flaws of the others instead of looking in the mirror and finding the flaws within him. He is a focused person and due to it he may often miss all of the other things that are going on around him, such as the emotions of his friends or lover. Surprisingly, Virgo man is able to excel at carrying out the duties of a husband but the problem is to get him committed.

Aquarius woman is generally very friendly and sweet lady who is not just intelligent, but often genius. She may seem detached from the rest of the world but actually she is extremely alert, never missing a fine detail. She is very intuitive and often scary psychic. She is born with a fine tool that many others seemed to lack. Innately an alarm goes off inside of her telling her instantaneously something is not right. Love is not a very good idea for an Aquarius female in the beginning as she confuses it with friendship. But gradually she learns to care and feel.

Aquarius woman is very bubbly and friendly lady with an impressive intelligence to make a Virgo man fall for her. She loves to dream and admire her dreams and her fancy dream world. Nothing can ever stop her, not even her stable Virgo man. She brings a new spunk and excitement to the life of her Virgo male and shows him the horizons he has never ever dreamed of. Though it is not her ability to pay attention to fine detail, it is her intuition telling her that awakes her when something goes wrong or when he needs her helping hand. When she finds love that is fulfilling emotional, mentally and physically which she receives from her Virgo man, she is ready to head to the altar to get properly engaged. But sometimes she can be very cold and detached which can make him insecure.

A Virgo man is sincerely devoted to his woman and this is what makes him a great match for Aquarius woman. Though, he needs a great amount of time to ponder before making life altering changes, even if he is completely madly in love but once he decides then he is the most dedicated and loyal partner. He and his Aquarius woman do not really bother each other with their natures, but they rarely have much to do with one another. The timing between a Virgo man and Aquarius woman is typically off. She has the ability to show many people how wrong they truly are, which does not suits well with to him. Once he smells his own stench of failure, usually pointed out by his Aquarius lady, he shuts down and no longer wants to communicate with her. Together they lack the communication needed to keep a relationship thriving.

As the twinkling eyed Aquarius woman solves the silent mystery of her Virgo man and brings in new dimensions of excitement in his life, they both enjoy the warmth and fun of life with unconditional love and stability that is a rare thing for Aquarius woman to experience. Their love has all the expressions of enthusiasm and romance and yet has a silent serenity. With her expressing face — having a flashing quicksilver exquisiteness for her Virgo man — and he having all the care and substance to give to his Aquarius woman — they make a perfect togetherness with blissful thoughts and deep intellect. Their achievements and accomplishments are so very delightful for them, that they always bring home the trophy of success when they work shoulder to shoulder supporting each other. Together they discover the inner beauty of hearts and relations and understand the oneness that keeps them close forever.

Sexual intimacy between Virgo man and Aquarius woman cannot be awarded as a very good experience. Virgo man has intense desires and way of expressing love while Aquarius woman takes love making for granted. She is one of the few women of the zodiac who is able to have a sexual relationship with a man while not being romantically involved. She can return to her own world of ideas and dreams with no strings attached. While the Virgo man has very different point of view regarding physical intimacy where it is both on emotional and physical level giving complete gratification to both the partners. If the two have any type of relationship it would be a friendship that from time to time involves meaningless sex. He requires a relationship to have some meaning. Therefore, the lack of empathy between the two may lead to an uninteresting love making where either one or the other feels unsatisfied. The one way to make it better is to understand each other’s need; Virgo man should be more creative in his physical expression while Aquarius woman should be more sincere towards their intimacy to make the relationship better.

As problems creep in the relationship of Aquarius woman and Virgo man, they get to move on in opposite directions more quickly then couple from other zodiac signs. When she finds that he has made a mistake that breaches their trust and loyalty she instantly becomes detached from the relationship. It is not that she is unable to forgive; it is that the purity of the relationship has been tainted with. She requires a pure clean connection with a man, so once the connection becomes fuzzy she disconnects and moves on to a new man who is able to provide her with purity. These two typically have a doomed stricken relationship. The only thing that can prevent destruction between the two would be true love. They may be able to find love in their intellectual worlds they both seem to live in. They both have to work very hard in order to keep a happy healthy relationship between the two.