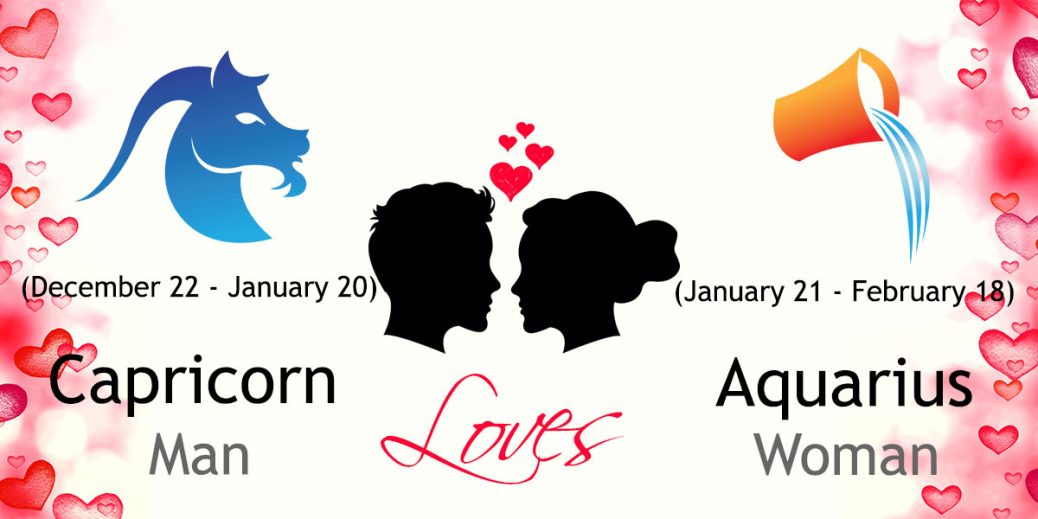 Be flexible during travel. As a couple, you can avoid bickering if you deal head on with a family crisis, impacting the Capricorn man's relatives or coworkers. Find happiness is the little things in 2021. Treat yourself as a pair to something you both enjoy. See a show. Visit a museum. Dine at a favorite restaurant. One of you have a question that you are hoping to resolve. This cannot happen unless you speak it aloud. It is time for the Aquarius woman to be honest and forthright about a concern and the Capricorn man to listen well and response with a candid and caring answer.

As Capricorn is earth and Aquarius is air, they make a rather uncommon combination with little to share in their habits and attitude. The Capricorn is always very responsible in nature while the Aquarius sounds indecisive and undependable frequently. While the Capricorns have their stability in everything, Aquarius is always looking around from new things.

A Capricorn man has great ambitions in life which he pursues fiercely. He believes in permanence and self-discipline. His determination is followed by outstanding patience. He appears to want to be alone but longs for admiration and acceptance from people just like everyone else. This man falls short in the areas of expressing and generosity. He does not handle change well at all. He is very structured and follows a strict routine and becomes irritable and uneasy when his routine is changed. He is a traditional lover who can over look the negative qualities of his lady.

An Aquarius woman is often detached from the rest of the world. She is also very flexible and able to change into many forms. She is very intuitive and often scary psychic. If it is not her ability to pay attention to fine detail, it will be her intuition telling her about anything wrong. Good luck lying or trying to withhold information from an Aquarius woman. Innately an alarm goes off inside of her telling her instantaneously something is not right. Many people are caught off guard by the Aquarius female by thinking she is only living in a dream world.

The natures and personalities of a Capricorn man and an Aquarius woman are very different. These two have very little in common and that is what attracts them to each other. Though a Capricorn man likes traditional lady but he also senses that she has a great amount of wisdom and he quietly admires her for that and her sweet submission in love which makes him feel a complete man. Being an intelligent Aquarius woman in love with a Capricorn male, she would cherish his family and she presents her arguments suggestively and calmly. With this approach, she always wins nine out of ten times. But her aloofness may humiliate him, especially when they are in a public place.

The Capricorn man’s main focus on the relationship between him and the Aquarius woman is on the basis of home life and family. But she enjoys roaming freely. A relationship between the two leaves her feeling that she is missing out on something. Both of them are concerned with money and financial security. He protects and care for his Aquarius lady and provide her with financial security too. If the Aquarius lady gets what she wants, she remains happy with him. He also understands her desire to be respected as an individual and appreciates her acts. On the other hand, she is one of the few who can tolerate the moodiness of a Capricorn man and make him feel comfortable in the worst of the situations too.

As the unusual association of Capricorn man and Aquarius woman deeply involve with each other, they learn to understand their partner and fulfill the needs with smile on their face. He learns from his lovely Aquarius lady to become adaptable and ease out things in life. She also gives him an open space to fly and feel the dreams. While she learns to become more stable about life and dear ones and take responsibility with determination. They understand their difference and respect each other’s qualities that not only bring newness to their lives but also complement them. Her love is soft and his is determined, together they weave a lovely nest of warmth and happiness where dreams come true and love shines brightly in their eyes.

The sexual relationship of Capricorn man and Aquarius woman is full of many different vibes. When it comes to making love, the Aquarius woman can have many different moods. She is very feminine during love making, while also adding a sense of masculinity with her ability to control the situation. He is very turned on by this at first and he feels strong physical connection with his Aquarius woman. Love making is more imaginative and mental to the Aquarius than it is to the Capricorn. He finds lovemaking to be physical experience that is enjoyed by the bodies and felt by the heart. His resistance is gone during her submission to him. For her, it can be such intensely pleasurable torture. He doesn’t really want it to end but the ending would be always so sweet. Together they create a fulfilling experience of sexual intimacy which is full of all physical display of affection and soft and dreamy expressions of love and romance. He presents his love in most physical ways and she fills colors to their love making with her imagination. They understand each other’s needs in long term and give their best to make the experience satisfying.

A Capricorn man and an Aquarius woman both have to put forth a great amount of effort in order for their relationship to work as they suffer from lots of differences that are difficult to cope up with at times. He is quickly turned off by her who does not get along with his family. She also has to learn how to keep her mouth shut during certain times. While he needs to understand that she is not a lady who will always work according to his will. She is very individualistic and loves her independence above everything. She may also sound fizzy to him. But if they both want to maintain a relationship then, he will ultimately respect the Aquarius woman for her mysterious wisdom and she will also learn how to deal with his moody behavior and spells of depression.