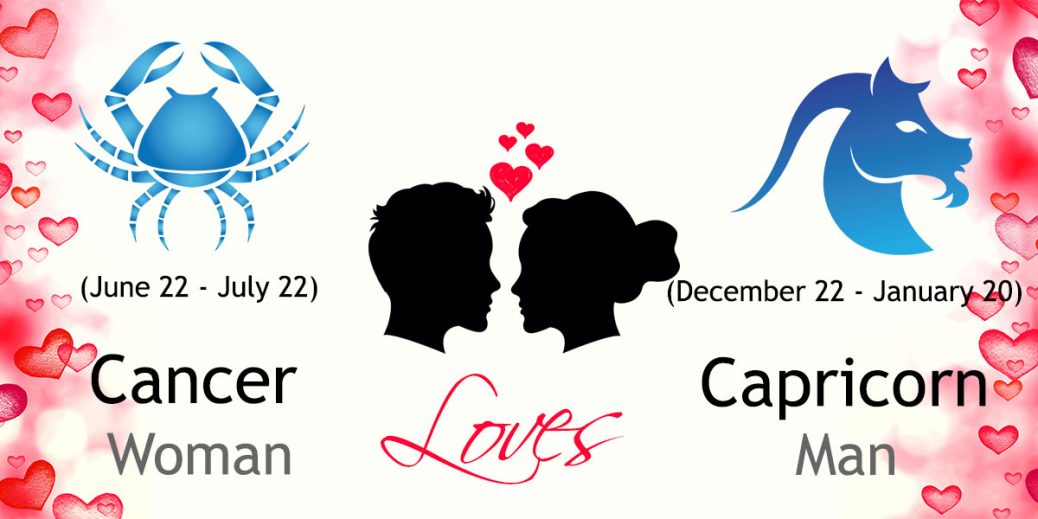 The Capricorn man may be required to travel for work but if you plan wisely it just could be an ideal occasion for you both to get out and see the world some. Catch up with a mentor or teacher of the Cancer woman. Check in with relatives before you set sail as a family stress could hold the two of you back or call you both back home again. The year 2022 is the real deal -- a chance to truly bond, to grow closer by being honest and open with one another. Keep an open mind and an open heart and your love will grow.

Though the Cancer and Capricorn are just opposite to each other but still if it’s a pair of Cancer woman and Capricorn man, then it works rather well. They both compliment each other and understand the importance of lasting relationship. Devotion and affection comes to both of them easily and generally they make a happy duo!

Capricorn man is an ambitious man who is strongly determined to reach the top with his efforts and undoubted courage. He is conservative and domineering in nature and his most endearing quality is his dependability in times of need. Once out of his serious course, he is very tender and gentle with a soft smile. He is basically strong and serious and at the same time shy too. In a relationship with a Cancer woman, he is incurably romantic and he admires his lovely maiden for her devoted nature and family loving qualities.

A Cancer woman is full of delicacy and sensitivity with an ultra feminine touch that makes her irresistible. She has the capacity to adapt to all situations and be patient and very composed especially when she is emotionally and financially secure. Peace of mind and security are some of the most important things for her. She reciprocates the true love of Capricorn man by being sympathetic and loyal towards him, in fact she always proves to be better than women of all other zodiac signs once her basic needs are taken care of.

The Cancer woman is one lady, who can easily attract a Capricorn man. She has such a graceful appeal that he senses it vividly as soon as they meet. She is one of a kind independent woman who is capable to do almost everything and hates to be dominated but being dominated in a love relationship with him usually never hurts her, if he proves himself to be a good provider. He is deeply respected by her as he is dependable and strongly ambitious which makes her both financially and emotionally satisfied. He can find an escape from his seriousness in the rich and refreshing humor of his Cancer female. But she seeks constant change in her routine life and he might find it difficult to comprehend the need for such changes.

The Capricorn man may have a stern external appearance but once he comes in contact with the lovely Cancer lady, he displays well his gentle side. She always finds her safe home in the domineering, tender, and affectionate Capricorn male. So it all works out in a favorable manner for both of them, in most cases. He specially admires her for being a family bird and a conservative because even for him family matters the most and extravagance is something he cannot stand. From day one, this couple develops appreciation for each other and this strengthens their relationship constantly. But there are times when he just concentrates on boosting his ego which is not be appreciated by her. Sometimes he may even turn cold and unresponsive both physically and emotionally showing his selfish side, this makes the relationship terrible, if not taken well in consideration.

The Cancer woman and Capricorn man makes a lovely pair as they both have same qualities or the different qualities that are admired by their counter part. His love has such endurance and magnificence that she feels blessed to have such a comforting and dependable man in her life. While she has got that magical key which can unlock the emotions in his heart and help them flow smoothly and lovably. Like a glimpse of eternity, they both have wonderful rewards waiting for them in their relationship. They both have such a magical chemistry that even their unspoken needs are fulfilled by each other. Their home is always a warm hearth where each family member is taken care of well either elders or little ones and where they both rest peacefully in each others’ arms, admiring their accomplishment and qualities forever.

The physical aspect of Cancer woman and Capricorn man is a beautiful blend of Water and Earth, which can tenderly be made in a garden of graceful blossoms with strong love and its right expression. Since both of them take relationship very seriously and look out for permanence, their physical mating is also deep and long lasting. The sex life of a Capricorn man ranges from frankly erotic and sensual to tender and affectionate. He is capable of a deep and steady sexual expression and physical intimacy as his sex drive is never halfhearted making the Cancer woman to enjoy the physical relationship without the presence of any kind of fear due to the stability provided by him in his physical expression. But he may lack the kind of sensitive imagination that makes mating between two people a trembling, ecstatic kind of sharing of themselves and this is a sexual dimension that she adds to their relationship, and the Capricorn man feels touchingly grateful for the enlightenment. Their physical relationship develops and strengthens with time when the Cancer woman finds more and more sufficient emotional security from the Capricorn man and when he gets the much needed romance through her. And this physical relationship helps them to stay together for a lasting time.

The problems between the Cancer woman and Capricorn man are numerous, but essentially minor, none that cannot be softened and healed with a little more understanding, a little less selfishness on both parts. He has the propensity of using people for his own need without taking into consideration their feelings, this can make the Cancer woman upset as she may find even herself to be a victim of this at times. Capricorn man should try to set himself loose when he is with his Cancer lady. She works at a different pace and is faster than him. When he does that he can see much more growth and success, both in his profession and personal relationships that he has ever seen. Both need to be more patient and humble while dealing with the emotions of each other.