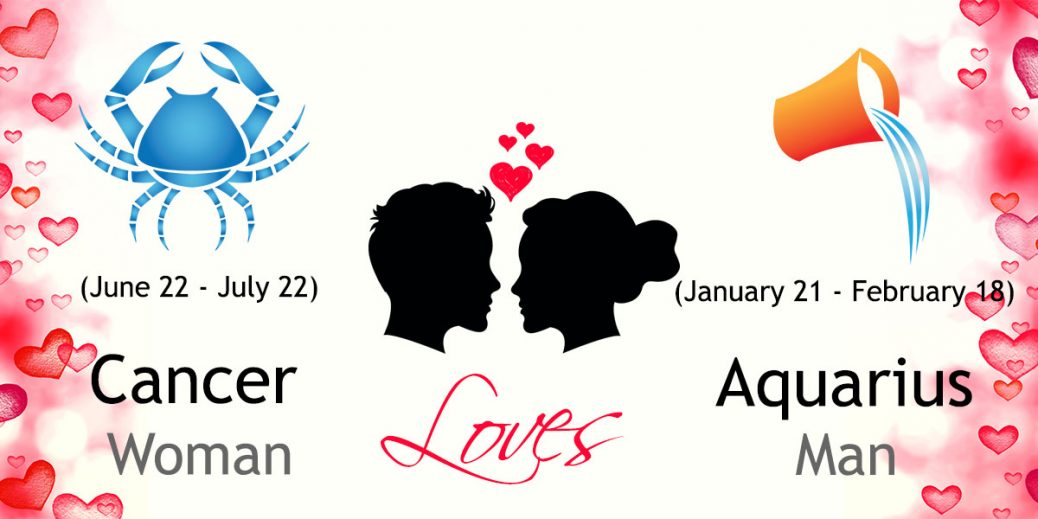 The Aquarius man is seeking change, perhaps a new setting or a new look. The Cancer woman can offer a sympathetic view as the Aquarius man works through some major self assessment. You each have ambitions that require you to talk as a couple about your strengths and weaknesses. A change in your relationship might be necessary. Consider all options including some temporary space apart. But don't be blind to each of your physical needs. It may be that you are both holding in a secret, even a secret desires. Don't let a sense of shame or self judgment get in the way of talking honestly with each other.

When a Cancer woman and an Aquarius man decide to go for a relationship, it maybe some what a puzzle for them and more of a challenge as the blend of Water and Air is not easy to be proportionate. But still there is always a charisma and power that draws them nearer to each other with every meet.

An Aquarius man is a very gentle and docile person but his surface calmness is not the only fact about him, deep inside he is very outgoing and fervent man. He never runs from controversies and unexpected situations, in fact he leads them sometimes. He craves for affection but feels being trapped and suffocated when his partner is too possessive or too caring. His hopes are never dampened by cynicism and he loves to socialize. An Aquarius man in a relationship with a Cancer woman is just a perfectly loving friend who gives her complete freedom and expects his not to be barred either.

A Cancer woman with a lovely lunar laughter and delicate sense of humor is definitely worth being appreciated. She is quite careful with money, and as a result she is neither extravagant nor penny-pinching in money matters. At times the Cancer lady may sound bossy but her real concern is to protect and care her dear ones from any harm. She is very intelligent and independent woman with sensitive feelings. She enjoys the habit of saving every trivial thing especially the ones with which she has a sentimental value attached. When in a relationship, the Cancer woman fiercely guards her lover and though she is not jealous, but, she does not like sharing her love either.

The Aquarius man primarily attracted to the Cancer woman because of her sense of humor and constant change in her routine life. She usually proves to be a happy companion for an Aquarius male. She teaches him all the synonyms of friendship and beyond it to a deeper relationship of love. At times the changing moods of Cancer female can baffle him but gradually he learns to deal with it, because he believes in adaptability and flexibility. At times she might think that he is quite weird but gradually she is able to manage and rather enjoy his odd behavior. She must try to curb her urge of compelling him to spend time at home because if she becomes too protective about him, he can get used to it and in the process she might have to sacrifice some of her dreams to keep the relationship alive.

The Aquarius man is a companion who gives complete freedom to his Cancer woman and always provides her with a mate who is ready to hear and help. His expression of love is friendlier rather then being romantic and he may take the relationship in an easy going way. He might also feel offended if he is questioned about too many things but certainly appreciate the flattering attention he receives from his Cancer lady. Though both of them do not want any kind of interference in their lives, but still he tries to pry into the secrets of his Cancer woman, making her feel uneasy and disturbed. He throws occasional surprises at her so that their relationship can remain interesting. The best way to reduce the differences is to participate in things which interest the other partner and this is how they both can remain actually happy with each others.

As the relationship of the Cancer woman and Aquarius man gets inexplicably interwoven, they can read the unspoken messages through each others’ eyes making their togetherness miraculously beautiful. She holds him with her beckoning secrets of her eyes and he binds her strongly through the indefinable mystery of his existence. Their dreams are tinting with lavender and shimmering silver that makes their realities even more vibrant and colorful when they are together. He becomes more stable and responsible with time while she learns to be free and more expressive. Their love has a enchanted aura that brings out all the delicacies of the Cancer woman and binds him so strongly with silky threads of affection that he just leaves all his mysterious odds and falls in the never ending eternity of oneness with his Cancer lady.

The sexual attraction between the Aquarius man and Cancer woman is quite evident and a powerful chemistry draws them from the beginning. They can take it to the next level if they can blend their positive and negative qualities as he is ultra-masculine and she is ultra-feminine. She can successfully bring forward the quality of tenderness in the Aquarius man, and this truly surprises him. He was not aware of his soft core until he is mated with lovely Cancer lady. The wild side of her sexuality is aroused when she experiences his airy touches. There is something very titillating, very arousing, about feeling when he makes love to his Cancer princess, totally owning her for a few moments. She fully enjoys it and feels so terribly naughty, and so terribly excited. She often fights the desire, the intensely lustful urge, to give her body entirely over to her arousal, yet at the same time allow herself to fully experience the mounting, growing pressure to do just that. Especially when it comes to their approach to sex, they enjoy their love making immensely as it brings them peace and contentment. No wonder their sexual union is a special experience which is unique and unpredictable, potentially so deep and fulfilling, especially when they are in harmony.

The relationship of Cancer woman and Aquarius man is usually not a cake walk, in fact it is a rough road which needs to be constructed with immense compassion and devotion to make smooth. The older he grows, the more fixed his habits become and on the other hand, as she grows, the more wistful she often becomes about realizing her dreams. But in beginning, she wants him to display sympathy towards her whenever she feels lonely instead of irritating her with mindless questions. He also expects her to be more liberal with his freedom. A lot of respect is earned in this relation when she understands that the Aquarius man needs to socialize and he understands Cancer woman’s habit to have secrets. If they can apply this rule, they can stay happy with each other.