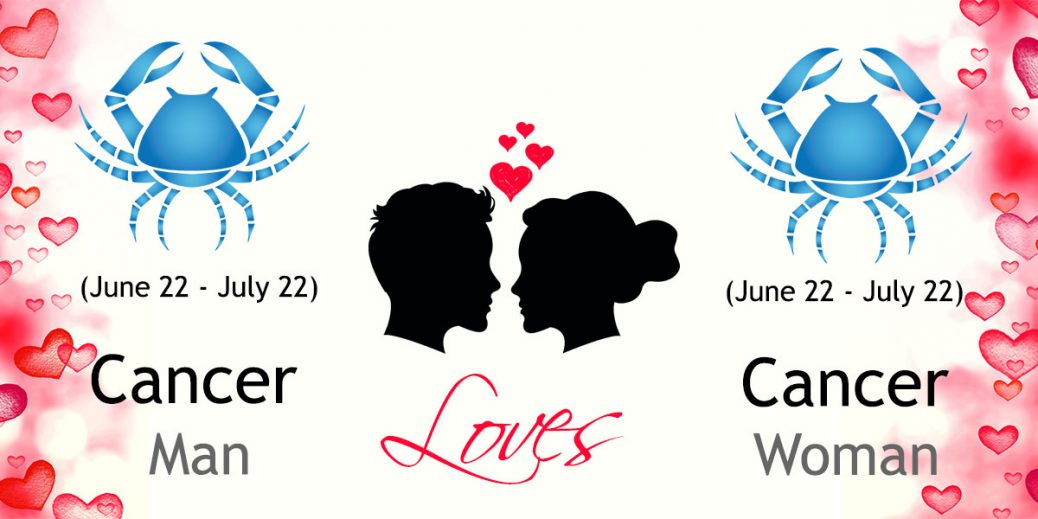 As the two of you make some travel plans, be aware that family complications, especially those impacting the Cancer man's father could cause complications. You may be needed to resolve some complex legal issues. It would be wise to remain close at hand to relatives. This doesn't mean you don't need a little quiet, romantic time though. Maybe scale back your original vision rather than scrapping it entirely. Try a retreat to somewhere that connects you with a shared spiritual goal or creative interest. The Cancer woman especially is yearning for a change of venue and ideas. You don't have to go far to find that though. Seek out some new excitement together.

As the sensitive Cancer man and woman fall in love with each other, they make one of the most amazing pairs. The element water mixes so well that they usually live a very cozy and comforting life, supporting and understanding each other in all aspects of life.

A typical Cancer man is a gentle person with lots of emotions and sophisticated mannerism. He is one person who works hard with determination to achieve success which is more a synonym of money for him. Though he is known for his flirtatious nature but once he is in a serious relationship, he proves to be a very caring and loyal partner. While Cancer woman is usually a delicate damsel with soft eyes and friendly smile. She cannot handle rejection and criticism and is herself also never rude or arrogant. She too is a very possessive lover and can suffer from unknown insecurities and fears at times. Both the Cancer man and Cancer woman finds money to be most integral part of their lives and extravagances is a crime in their eyes.

A Cancer woman is definitely a great match for a Cancer man who seeks same level of security and love as she does. She is basically a humble lady and hardly shows her aggressive side to anyone. Though her shy nature prevents her from taking the plunge but she is still strong enough to stand for her family and loved ones. She is a deity of love and concern and she hold enough affection in her heart to give to all people around her. In love with a Cancer man she finds a mate to whom she can easily deliver her sentiments as he is equally sentimental and ready to love all the time. Sometimes she may unnecessarily brood over mundane issues or get drowned in inferiority complex, but, if treated with affection and care she is just a jolly bird, twittering around making things brighter and happier for herself and her Cancer man.

A Cancer man is a great combination of brain and sentiments who is admired by his Cancer woman for both his wisdom and his ways of expressing love for her. His cautious nature makes him and his lady love feel protected in the outer world, which all Cancer people tackle with care. Both the Cancer man and Cancer woman may have their different mood swings leading to some small arguments but generally they share a very strong bond. Only a Cancer man can find the right words and manner to calm a Cancer woman. Marriage always appeals to both Cancer man and woman as they both believe in permanence and emotional security plays a great role in their lives. Marital tie-ups usually are common in a relationship where both the people are Cancer. Where on one side the Cancer man provides economical security, his Cancer maiden makes a cozy home for both her Cancer man and children.

Both the Cancer man and Cancer woman enjoy a good relationship as they help each other in times of need and be cordial with each other and never lose their calmness. Their unison eradicates all the secrecy and mysteries of their lives making them one. The harmony that abounds over a Cancer home is more romantic and poetic then compared to any other zodiac sign. The warmth and protection provided by him vanishes all the worries and insecurities of her and the care and devotion given by her makes him stronger and more resistant to mood swings. They both generally have angels singing for them once they feel financially enough secure, which a Cancer man makes sure of. Their oneness has the brightness of fire, softness of silk and calmness of water that lasts for them throughout, making them a happy and satisfied couple.

Both the Cancer man and the Cancer woman love to play sexual games because they are scared of rejection or think that their partner might not respond positively. But when both the signs are Cancer, they understand well each other’s emotional as well as physical needs and respond well to each other. Though none of them is desirous of handling, a demanding sexual passion but still they enjoy their oneness to a great extent. Physical relationship for them is way to display their affection for each other. Be it the Cancer man or the Cancer woman, both of them expects to spend some time together after consummation as this makes their bond stronger. Romance and their mood is a vital part of the physical relationship shared between them. If any of them senses being ignored throughout the day, then the things may not turn out beautifully during making of love. But generally as both the Cancer man and woman are humble such issues does not exists for a long time and they generally share a very warm and deep physical relation which not only brings them physically close but also strengthens their bond of attachment and provides them emotional security.

Generally a Cancer man and Cancer woman go very well with each other. They both sympathize one another finely and also appreciate each other’s sense of humor. Their beautiful imaginations bring bright colors to their lives and keep them intact with their mate. But at times they may have some problems when one of them goes through a bad mood swing or becomes dominating and possessive about the other. There may be times when some kind of uncertainties prevail in the Cancer relationship and result in some sensitive tears for both. They should try to avoid any kind of secrecy in their relationship to maintain the trust. And since they know each other well, they usually cope up with the bad days to bring the laughter and security back to each other.