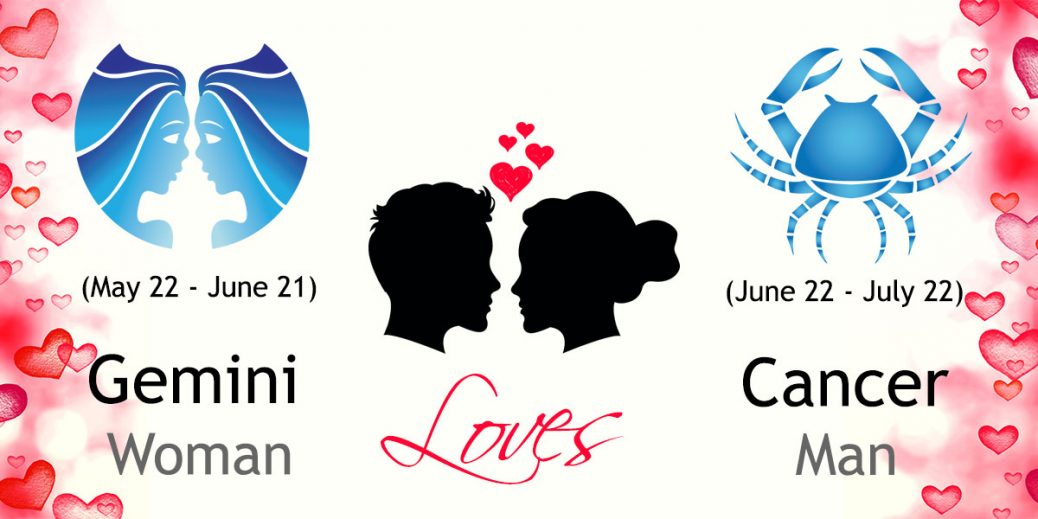 When the Airy Gemini and Watery Cancer fall for each other romantically, their relationship may have some ripples and rough stages but soon it will be a peaceful association especially in case of Gemini woman and Cancer man. She admires his chivalry and he loves to cherish her multiple personality display.

A Cancer man is very courageous and money minded person. He lives in his sensations, emotions, and imagination. His love for the chivalrous and noble grace makes him happy. A Cancer man is very intelligent and cautious regarding every matter of personal and professional life. When in a relationship with a Gemini woman, Cancer man cherishes his past and share this with his Gemini woman lover, making his biggest dream come true. His devotion to her is steady, solid and long term. His sense of security is driven by the need to invest and the fear of not having that security when it is needed most.

A Gemini woman is a lady with single soul and many aspects. She can entertain herself as well as the people around by her different skills. She is intelligent and easy to make friends with. Investing is not her cup of tea and she spends money like water goes through a fountain. Mind games are popular with Gemini woman as she loves creating as well as solving puzzles. She changes her thoughts faster than anyone can. Her sentimental gestures and charm keeps her relationship with her Cancer man alive and her display of affection keeps fire in the romance. She never bores her Cancer lover; rather she delights and amuses him most of the time.

A Gemini woman is like a star filled summer night sky with one shooting star that only a Cancer man can see. She wants to travel her Cancer man’s world, as it is a Gemini trait but so does the Cancer man, as he wants to see the world with his Gemini woman and they both want to share their experiences with each other. She tends to show her love through gifts and small items that are admired by her Cancer man but sometimes makes him upset due to such insane extravagance. She goes from miss happy go lucky to a total wreck and then turn around and engage in intellectual conversation showing her abilities and surprising Cancer man. Gemini woman charms her Cancer man with her qualities but never feels that attachment and this is one thing that makes the Cancer man feel insecure and unattended at times. For keeping it smoother, the Gemini woman needs to be a bit more absorbed with her partner rather than wandering around continuously.

Cancer man knows how to treat his lovely Gemini woman like a true lady. He shows his Gemini woman that chivalry is not dead. She is thrilled at such lovely make-believe of a gentler time and usually behaves accordingly. He is the first person who ever shows his lady love, true passion and makes her feel like walking on air. Cancer man’s strong bond with his Gemini woman doesn’t surface alone. His need to possess her comes shortly behind and cuts into their relationship quite maliciously. He does have mood swings but Gemini woman forgets whatever he was venting about two minutes later. When she has her mood swings he just stays quite or consoles her, depending what the situation is. But to realize that his lover is not just a woman who craves to be protected by him but is also one to wander when she feels the need to spread her wings and fly is not too easily digested by him and this can create some small problems.

As the sensitive Cancer man and sparkling Gemini woman conquer the problems in their relationship, they become more compassionate and devoted to each other. They now have their time of wonderful bliss and romantic interludes, leaving all the jealousy and confusion far behind. Attachment is a small word compared to what they both feel for each other and their mutual ‘Walkabouts’ have romantic wandering through their minds! Each sees the unspoken wish reflected in the other’s eyes and does the level best to make the partner happy and fulfill all the dreams. Since both have moods and imaginative mind, they fill their lives with wonderful colors of love and compassion and from beautiful creation of their thoughts they prepare such a wonderful room in their hearts that the other one never wants to leave.

The sexual relationship between Gemini woman and Cancer man is quite inspiring and extremely enjoyable to both. Cancer man’s sensitive nature is likely to mix well with Gemini woman’s ever changing ideas. A Gemini girl is one for having sudden ideas. She may have some changeable ideas about passion. He is quite capable at changing to her needs, making this union one that is easily understandable and quite strong as time passes by. Their love making is usually irresistible as their passion is unbeatable and the satisfaction they get in their oneness is above anything experienced by them in past. Constant change benefits them both in that there is never a boredom of repetition. He may even throw in a little surprise or two of his own. He feels special when she portrays her need for his affection and when he makes love to her he shows her a warmth and protection that her child like heart melts to.

The relationship of Cancer man and Gemini woman has some nasty faults to be taken care of. Gemini woman shall try to persuade her Cancer man into pretty much anything she is interested in, especially when it comes to travel. She may leave if he restricts her on a flight of fancy while her lover waits patiently retreating into seclusion. Cancer man sulks and draws himself back as he craves to have her back in his arms. He needs to be tolerant of the Gemini faults of restlessness and detachment and she should cultivate virtues of patience and sensitivity. They can find their share of happy together, but it will take patience on her part and some adaptability on his.