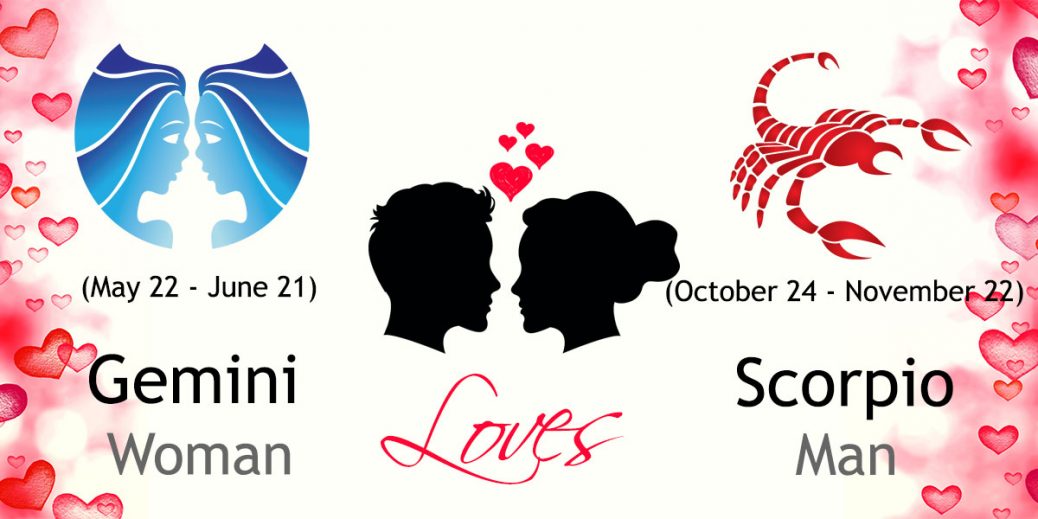 For the Scorpio man, the glass is decidedly half full in the 2022. He is ready to wine and dine, to meet new people and networking. His mind is also turned to romance, to putting a spark back into your relationship. The Gemini woman may not be offering the warmest reception to these plans, due to work or family stress. She could try and put a pause on some of those outside cares. Together, work to turn the volume down on things you cannot control, especially the actions of others. You are both ready to talk some spiritual beliefs and planning for the future. Enjoy those talks together.

Gemini and Scorpio make an absolutely odd couple. Since both of them are often gravitated towards challenges, they try to tame each other in their own ways. Gemini infuses a lot of lighthearted fun into the relationship while Scorpio’s love nature is intense. Learning to blend these distinctly different styles and values can be challenging, but with success, very rewarding!

A Scorpio man can handle, solve, win and conquer seemingly all impossible situations. He can handle pretty much any situation on his own and is tolerable of most. He is a strong individual, full of mystery, who is constantly looking for power and is quite loyal to his loved ones. He is intense, suspicious and quite a jealous creature in any relationship. If he finds his partner to be genuine he will be loyal to her till the end. However, get him angry and most likely one has to suffer the wrath of his sting.

A Gemini woman is many personalities bottled in a single woman. Her dual nature allows her to be someone different throughout her life. No commitment, no settling, no one personality. Though she is a very clever and intellectual human being but her mind never settles, and her thoughts are always in a fantasy land. She wants someone fun, someone exciting, and someone who can stimulate her imagination. This makes it difficult to convince her to become deeply involved with any one person. But at the same time she is very romantic and brightly sensitive person who can manage to show affection with ease.

The initial contact of Gemini woman and Scorpio man throws sparks and cause captivation. He falls for the Gemini female’s bubbly charm and intellect, her clever conversations and the delicate nature she gives out. After the newness wears off he begins to reevaluate how much he really adores her charm and bubbly attitude. His awe of her starts to be replaced with jealousy which causes her to rethink such a relationship also. Although she feels that her he is constantly trying to pin her down and control her every move, she must realize how deep rooted his love for her really is. He may also cringe at her frivolous attitude towards money and her ever changing ideas about what she thinks and she wants. But she can always figure out how to form the lovely bond and Scorpio male is the one who can fix the cracks and strengthen that bond when they become a threat to their relationship.

A Scorpio man attracts the Gemini woman from the first time she takes a glance of him. His stability, his firmness and self-discipline is irresistible for her. These two would not be worried about falling in love and will focus more on staying in love. The mood changes, little tempers, personality changes and inattentiveness of Gemini woman toward her Scorpio man are treated by him with patience and endurance. He also understands when it seems as though his Gemini woman is scrutinizing his integrity and self control. But when the Scorpio man feels that his Gemini woman is trying to change him from the very deep leveled roots he was born with, it becomes very difficult for him to take it. In such a situation, he just needs to understand that it is just her whimsical ways of trying to tell him to back off and let her have some room.

As the Gemini woman and Scorpio man intensely desire and rediscover the purity of their love, their unison becomes miraculous and they retain the brightness of their hearts. They both share enthusiastic affection and long lasting devotion mixed with memorable parts of classic fairy tales. She is full of feminine wile and guile– teaches him to be more free spirited — while he teaches her to take things more seriously in life. They both enjoy promising love and always honor and cherish their relationship in the heaven of passion and romance where angels sing for them and fairies shower them with glittering stars and soft blossoms.

As the airy Gemini imagination, and watery Scorpio passion, blends for sexual unison an interesting beginning is experienced by both of them. Her playful side always comes out in her sexual relationship. She looks at it like a game, a pleasant pastime, nothing too serious and definitely not something that should be dealt with on a deep level. Keeping things light and fun is the way she likes it to be. Scorpio man, on the other hand, feels strongly reaching the deep levels of passion that are so important in a relationship. He is a person who takes physical love to a spiritual level and makes the pleasure of sexual intimacy, an eternal unison. If she can reach these levels with him and fulfill his deepest desires she need not worry about infidelity within him. If Gemini woman genuinely loves him, there is a possibility with some teaching and charm that he can show her what it is that he so desires in his lover and can even put flame to her passion. She may just be able to reach those overwhelming desires he so craves and actually make their sexual union eternal!

The relationship of a Gemini woman and Scorpio man can be no less than a bumpy ride around a smooth road. She needs to work hard in staying calm and level headed when her Scorpio man shows his stubborn streak or becomes violently emotional over her light and delicate attitude toward things that mean so much to him on such a deeper level. She has to understand when he needs her close, to show him that she should be devoted and faithful to him and only him when all she wants to do is spread her wings and fly. He also needs to get used to her occasional bouts of devotion and game playing as well as her wandering mind that wants to take her away from him for a more social atmosphere. If treated cautiously, the initial love and power of these two is enough to form a strong bond between each other with enough effort on both the sides.