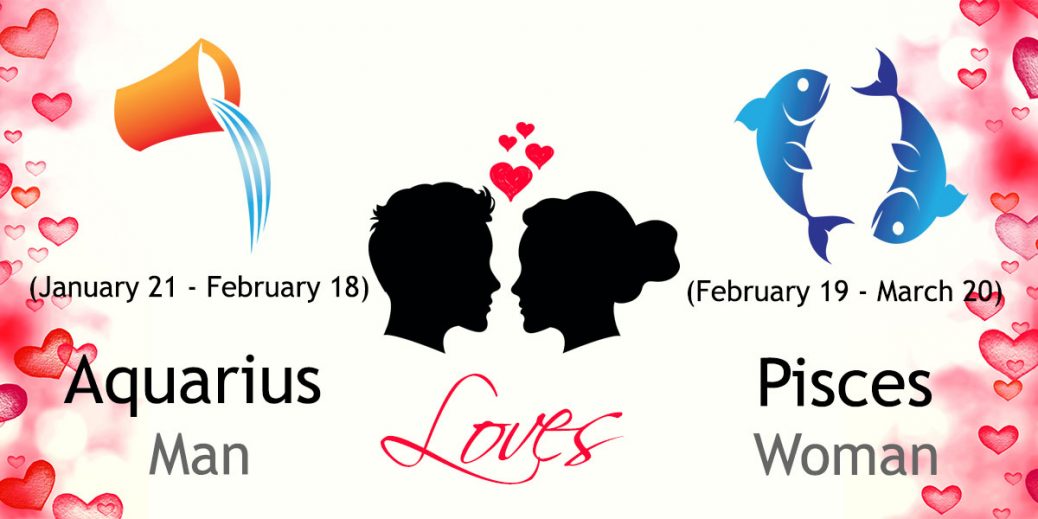 The friendly Aquarius and sophisticated Pisces make a dreamy combination where they both can make-believe and manifest almost everything they want. They both are polite and easy going but the problem comes when Pisces wants security and Aquarius shows a detached character. It just depends on how they make it as it can also turn out to be a very great camaraderie!

An Aquarius man is basically a jolly person who usually appears to be preoccupied all of the time and sometimes even distracted. But he is actually one of the great thinkers in time. Pondering the greatest truths of the world is what fills his mind. As flighty as he may seem, once he chooses his lover, he is loyal and faithful till the end. He also is a great protector of his lady love. He may be fickle by nature, but he is honest and does as he promises. He does not lie and holds his head high with any statement or decision he makes.

Pisces woman is a woman of little self confidence. She is a good listener and a patient woman with sweet feminine gestures. The delicate, sensitive and emotional nature of Pisces woman leads her in believing just about anyone and therefore is prone to a great deal of heartache in her lifetime. She needs to find her lover and put her complete trust in him, let him protect her and take care of her. He can tell her his dreams and ideas and will know they are safe in her heart.

An Aquarius man is completely drawn to the feminine qualities and delicate nature of Pisces woman. In fact she is the perfect one to keep him grounded and make him aware of his own sexuality. Once a Pisces girl has caught on to the Aquarius man’s passionate pretenses, stops crying, and starts seducing, he hasn’t a chance. Together with this she is also a great hostess for her Aquarius lover and listens to all his dreams with a patient ear and is ready to support him for his flighty experiments. He deeply cherishes the feminine qualities of his Pisces female and feels grateful for her support in all walks of life. But being too flighty and over friendly with others makes her feel anxious. Moreover, he at sometimes can be stubbornly rude to prove himself right, hurting the fragile heart of the Pisces woman.

A Pisces woman forms a strong bond with an Aquarius man as she needs a man who can take care of her and love her unconditionally to which he does just that. Soon he learns to understand her tears and after some time into the relationship, he lets the things go and pacify his Pisces lady whenever needed. He gives her space but at the same time keeps her safe from the worldly problems. She always admires him for his jolly nature and friendly approach. The problems with Pisces woman are that she may sometimes be very insecure and try to tie him around her which is an uneasy experience for him. She may also be confused about deciding on things and this can irritate him.

And when the love actually becomes unconditional between these two charming people, the outcome of their oneness is a blend of cool and soothing air of love with warm waters of affection! He understands the insecurities of his lovely Pisces lady and learns to become expressive and attached to her and she also becomes stronger and firmer person without losing her natural elegance and sophistication. As they hold hands and look in each other’s eyes, they both can actually experience lovely blossoms to unfurl in their hearts, making them happier and content like never before. With every soft whisper and with every warm touch the love of Aquarius man and Pisces woman keeps on increasing making their unison a match made in heaven and blessed by angels to a degree of harmony and delicacy that can only be imagine by other zodiac signs.

When the lovely Pisces woman and flighty Aquarius man come close to form a relation at physical level, their sexuality is matched with great excitement and soft touches. Usually he is more into a comfortable love relationship than a highly sexual one. However, there is something about her that draws him into his sexual nature. This is odd for him so he sometimes acts strangely and tries to cover up for it. He would then appreciate the natural beauty being so well enhanced by her feminine finery. He feels rather speechless and his heart racing. This irritates her and perhaps leads to some clashes. But with time, as their emotional as well as physical compatibility increases, their love making becomes better both on mental level as well as physical level. This creates a harmonious and highly satisfying bond between them. His touch is more like how an adolescent would first grasp a woman’s body, the hands so desperate, so hungry, so famished for the feel of soft flesh, and she so much enjoys a boy with a big appetite. He knows well how to fulfill the demands of his Pisces lady and makes her feel secure and she knows the magic to draw him into sexual love making. This is important since it is the main form of real communication between them.

The relationship of an Aquarius man and a Pisces woman is not as smooth as it seems to be. The innocent and naïve Pisces female sometimes sets her Aquarius lover off and irritate him and with his temper, he does not let it go. Instead of trying to appease the woman he loves and hurting her sensitive feelings, he goes through thick and thin in proving just how wrong she was or how right he was. He loves his freedom and she needs the cozy and warm environment of home and a confidant. He finds it hard to tolerate the needs of Pisces woman for him to be so close all the time and she may not care to see him socialize so much even though she does not have to worry about his fidelity. If the two love birds love each other enough, they’ll be able to overlook these petty flaws in one another and live happily ever after.