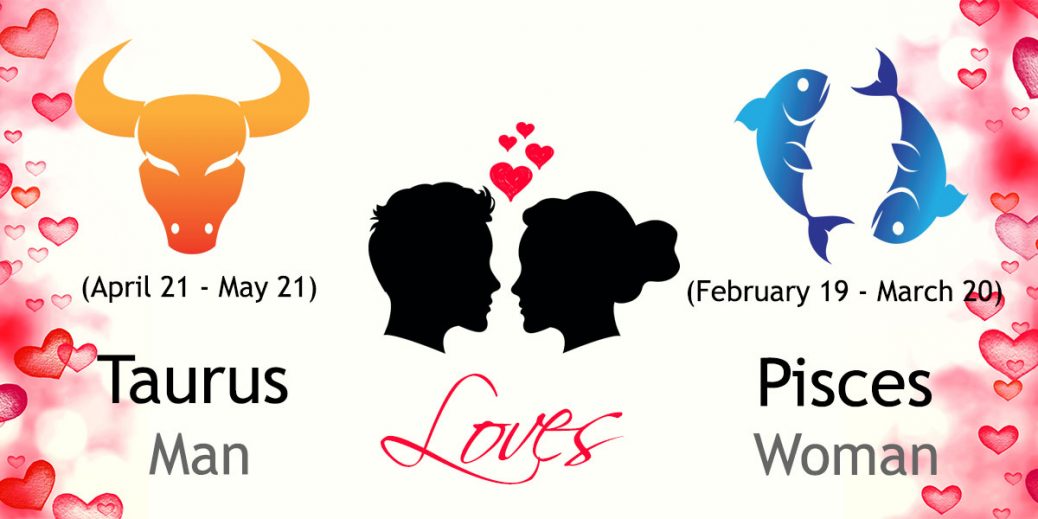 The Pisces woman could use the Taurus man's cajoling to Invest in a new look, in a wardrobe update or a hairstyle to feel invigorated. ThePisces woman is unlikely to splurge on herself without some encouragement so the Taurus man might want to consider making this a gift even. In the workplace and in social setting, theTaurus man finds that his personality is magnetic. Many friends, old and news, are ready to support a project that's been on the Taurus man's mind. Use the Pisces woman as a sounding board before bringing ideas before the boss. Talk it through together, especially if you are taking a professional chance. Be careful with your valuables though when the two of you are out in a crowd. Check in on family, especially the Taurus man elders, going through some crisis.

The combination of Taurus and Pisces is one of the most fertile and creative association. Although both of them have their differences in the way of expressing their love, they both are strong and dependable in relationship. They both complement each other and share a very strong bond of mutual respect and understanding.

A Taurus man is quiet, modest and honest individual who exerts his willpower with a domineering force that can even bend steel. He is a realist and not an optimist, yet his views are colored with hints of jauntiness here and there. Working hard and reaching his personal goals are of the highest importance to a Taurus man, but he works at his own pace and in his own way, and does not take kindly to others questioning his methods. In a relationship, he is a very protective, highly possessive and extremely caring companion with soft romance to be displayed time to time.

Beautifully feminine, sophisticatedly romantic, sweet and lovingly peaceful, the Pisces woman is the type of lady that inspires love at first sight. She can be naive and unrealistic about the world and other people, but it is simply because she is innocent and assumes the best of her surroundings. She tries to stay away from situations that could bring drama into her life, but being indecisive in nature brings some unwanted situations in her life. Well-versed in the realm of romance, she has most delicate and romantic gestures when in a relationship with a lot of respect and words for her man.

A Pisces woman can fall in love with a Taurus man at the first sight itself as he is actually one strong person who can take good care of her and her delicate nature. Both of them provide each other with the degree of comfort that they have always longed for. When the world becomes too unpredictable and overwhelming for him or falls short of her fantasies, the two can retreat to each other, where reality is a much more ideal place. Both of them are usually quite content embracing their traditional gender roles. The Pisces woman, who is soft-spoken and may have a timid nature, is more than happy to let him call the shots as she strongly regards and esteems her Taurus male. Having a tidy and organized home is essential to him, which is where he is the happiest but sometimes he can grow frustrated with the lack of personal motivation of the Pisces female and lack of desired cleanliness.

The Taurus man makes a perfect match for the Pisces woman, who always wants a reliable man and a stable relationship. He prefers to be the one in charge, and requires the respect and admiration that goes along with this and she has no problem in that. In fact this makes him adore her even more and take a lot better care of her. He always devotes himself to the love of his life and make sure to keep her comfortable and secure in all possible ways. Both tend to prefer staying at home to going out, which is a plus as they enjoy a lot in each other’s presence. But sometimes she may find him over involved in his work, neglecting her feelings and even a bit rude. However, when it comes down to it, these two provide each other with enough of their unfulfilled needs to brush aside their minor incompatibilities.

As the Pisces woman with serene charisma, soothing aura and an exquisitely tender touch, blankets her Taurus man with warm affection and supreme admiration, their love deepens and he forgets all his stubbornness and hard ways to become a noble knight with a heart of gold. He makes his lovely maiden understand the world but still keeps her at the bay, warmly below his arms to be taken care and besides his heart, to be loved dearly forever. Their winters are warmer with soft music of stars and snowflakes and their summers are all shiny and rosy with most beautiful butterflies of love and freshness of morning dew!

The sexual relationship between a Pisces woman and a Taurus man is a thing of indescribable beauty and fulfillment for the two involved. The Pisces female spends so much of her time daydreaming and fantasizing that she often misses much of what is actually going on around her. Lovemaking with Taurus sharply snaps her out of that clouded state and into a reality that is even more beautiful than her dreamy wonderland. The Taurus man, on the other hand, spends too much time in a cold, boring reality, that when he looks in the dreamy eyes of his Pisces damsel, she pulls him into a world that extends beyond everything he ever hoped for in both verbal and physical romance. Though he himself is not one for expressing his feelings through words, but is able to express himself powerfully through the act of lovemaking, thus making his Pisces woman feel secure and comfortable. She has so much to express by her softness and he has a lot to display by his physical presence that they blend it into a very passionate and satisfying unison.

In the relationship of Taurus man and Pisces woman, problems may arise when the couple emerges from the bedroom and the two have to face all the cruel, cold, and practical realities of the world. For both of them have opposite ways of viewing reality and the facts that go along with these views. He does not often speak before he is sure of what he wants to say and for him, truth is written in stone while for the Pisces female, her truth is entirely dependent on her current feelings. She does not view her actions, thoughts, history, or intentions in terms of black and white. Instead, they are colored by an entire rainbow of shifting colors. Hence, he has a hard time dealing with such inconsistencies of the Pisces woman. If Taurus man learns to accept that Pisces woman can’t view the world in concrete terms, and Pisces woman can soften his stubbornness, then this will no doubt be a match made in heaven.