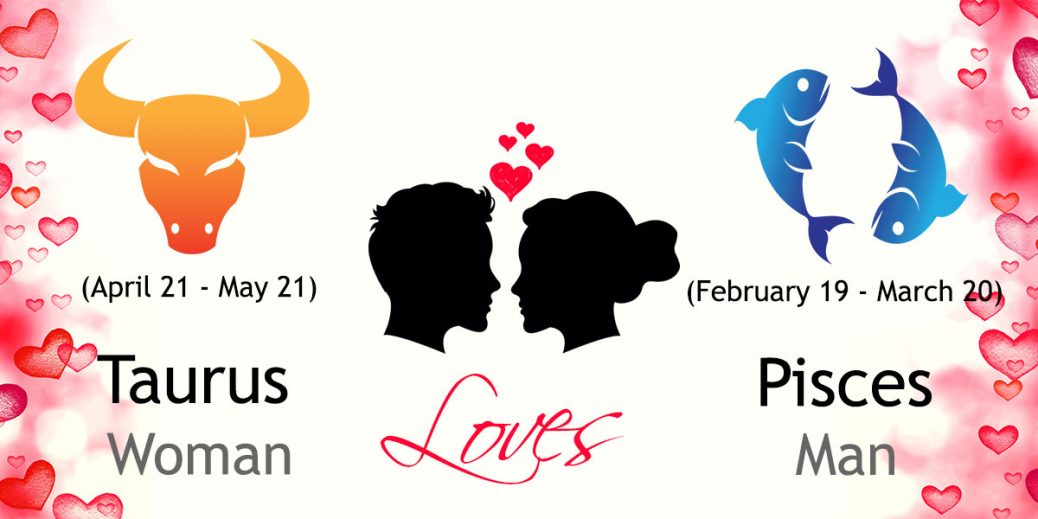 You may find yourself in different states of mind in the 2022. The Taurus woman displays her usual industrious commitment to work and family ventures. Impressing a boss or authority figure is the key to the Taurus woman rise in career fortune so the Pisces man should not mock these efforts. The Pisces man may be looking for something new, a fresh venture or exciting opportunity. The Taurus woman can offer assistance and be a good sounding board for these ideas as they develop. A real assessment of the Pisces man's strengths and weaknesses may be necessary which could be leaving him feel vulnerable. Make your relationship a space of loving critique and support.

There is a strong tie in the love association of Taurus and Pisces with ease of communication and great sense of responsibility towards each other. Though Pisces is a sensitive soul but Taurus provides a solid and steady partner. Generally both the lovers are appreciably predictable and simple except for the time when Pisces is in a changeable or negative mood.

A Pisces man is an even tempered and sophisticated man who sometimes behaves like a real dreamboat, although he can often be surprisingly unaware of this quality. Although he does everything in his power to avoid drama and turbulence, it has an uncanny way of finding its way into his life. He loves peace and quiet and has truly romantic approach to love as well as life in general. He is poetic and gentle in all his gestures, and remains simple and sweet all the time when in a relationship. Sometimes one may view him as weak because of his shifty nature, but he is merely an idealist.

A Taurus woman is very tender and kind lady with serene aura and charismatic personality. She is a patient creature and seldom nags for anything and for her to be jealous, it takes a good reason. She usually prefers home life and she is hard working beyond belief. She is normally a warm, gracious hostess for her husband as well as his friends and a pretty good listener and adviser when needed. Though at times she may seem cold and heartless but it is just her dedication towards her work and no rude intentions.

The Taurus woman is typically attracted towards the Pisces man who is unlike anything else she has ever known. She tends to not trust personalities that are mysterious or changeable, yet she finds herself magnetically drawn toward him. Still this relationship can be slow in developing. The foundation is laid very carefully because she knows the dangers of stepping too far out of the pasture, and he wants to take no risk at all. Even though he might not recognize it, he is in dire need of a caretaker, and finds the perfect prototype in his Taurus female. But at times she may get furious on his actions leading to a storm of anger and rage. For this, he has to take care, not to drift completely in his dream world and try to be some more practical.

The Pisces man is inevitably luring for a Taurus woman as he takes her into new and uncharted emotional waters, showing her a part of herself that she scarcely knew existed. He fully appreciates the predictability and simplicity of the needs of his Taurus woman. He is likely to take great comfort in knowing that he can lean on his Taurus lady when need be, as, if left to his own devices, he can let his life fall into shambles, but she is responsible enough to make sure that both of them are on track at any given moment. Both of them appreciate art, although their tastes can be quite different, still they enjoy admiring each other’s choice. But sometimes he may mean well when he makes promises, but is often too spacey and flaky to follow them through to the end which shatters the heart of the Taurus female.

With soft feathers of humor and romantic throaty whispers that vibrate through the midnight in an emotional rhythm, the Taurus woman and Pisces man smoothly slip into everlasting love. Her tendency to submit and not dominate on her man, gives satisfaction to him, while his soft and friendly attitude giving space to her and makes her feel like a butterfly. In their romantic love affair, they both experience earthy passion as well as unearthly ecstasy that make their unison a fulfilling involvement. They both communicate well and understand each other’s mutual desire with a soft but determined promise to fulfill them and keep each other happy forever.

The sexual union of Taurus woman and Pisces man is very satisfying. They both have a hunger for sensuality, affection, and reassurance and are more than happy to provide it for their partner. While the needs of Taurus woman are a bit more physical and that of Pisces man tends toward the psychic, together they explore new and uncharted territory that makes their love making adventures consistently stimulating. His outward romanticism takes her a while to get used to, but brings out of softer, nostalgic side to her usual sensibilities. Her physical demonstrations ignite a more present, passionate and aware approach to his lovemaking. There is a really interesting chemistry that goes on between these two. With time, these two gently learn to satisfy the needs of the other and care too much for each other to make their physical intimacy a beautiful experience. Her feet are planted firmly on the ground while the head of the Pisces male is way up in the clouds, and together they offer the best of what heaven and earth have to offer. At times, it will better for them to be mindful that good appearance can be as important as good work, particularly within a relationship, where their emotions itself are a matter of display and presentation.

There are a few differences that pop-up with time, involving some patchy and rough incidents. Although the Pisces man has nothing but the best intentions toward his Taurus woman, he has a bad habit of allowing himself to drift idly, allowing his abstract concerns to cloud the necessity of his real-world commitments. This kind of behavior can do more than just hurt her as it can break her heart. This can boil up her fury, which leads to some damage to the sensitive heart of him. Once she has become committed to her lover, she puts a superhuman amount of faith into him and can be utterly crushed when she is let down. Luckily for him, she is undeniably endeared to him from the get-go, and is likely to have a second chance in changing his ways. He has to grow up a bit in order to hold on to the heart of Taurus lady, but this is probably good for him in many more ways than one.