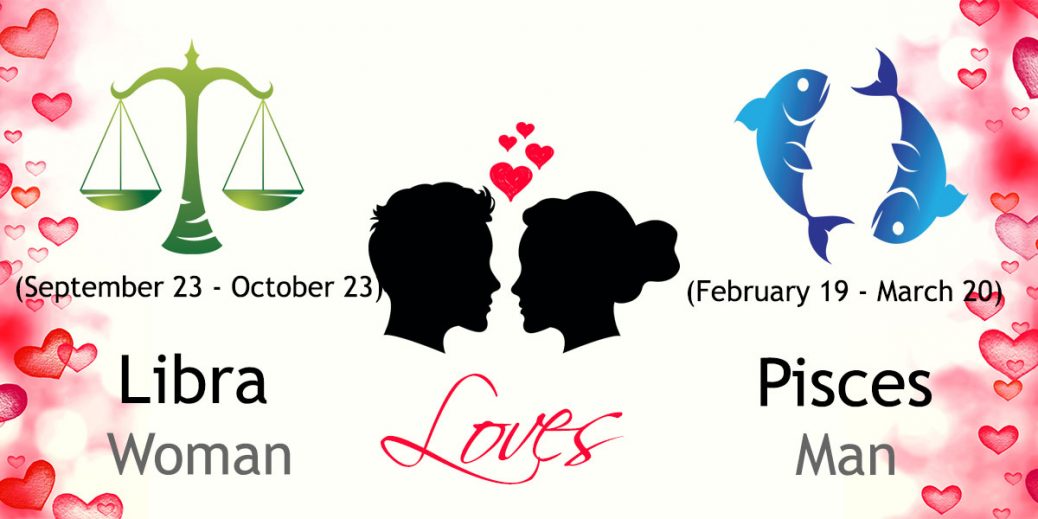 The Libra woman could be the victim of some stress or injury in the 2022. Don't let competition get the better of you, in either of your peer groups or work environments. The Pisces man is looking for a shift in identity, seeking some major reinvention.Takin the high roads is important for you both. Don't bad mouth one another or another individual. There are indeed obstacles in your way as is normal. However, there's no reason for these problems to undermine your partnership. Keep channels of communication open and spirits will remain high. Assess your strengths and weaknesses and you will both be the wiser for it.

In the relationship of Libra and Pisces adjustments are necessary and too frequently, but love and understanding can certainly make this partnership work. Libra’s approach towards relationship is intellectual and reasonable while Pisces thinks emotionally. Pisces needs some space and solitude in order to work things out inside, while Libra’s first instinct is to talk things through.

A Pisces man is an even tempered and sophisticated man who sometimes behaves like a real dreamboat, although he can often be surprisingly unaware of this quality. Although he does everything in his power to avoid drama and turbulence, it has an uncanny way of finding its way into his life. He is one who keeps his head in the clouds. He gives peace and security to his woman and always avoids all possible arguments. But sometimes a Pisces man is lost in his unrealistic dreams that can hinder his success and also his love life.

A Libra woman has beauty and intelligence but is quite indecisive when it comes to figuring out what she wants. She gets pleasure from the lavish, attractiveness and the comforts of life. She is no less than a charmer who can get miracles done just with her divine smile. She has the basic instinct of tactfulness and clarity of thoughts, perfectly blended with her charm and gentleness. She always startles her man with her marvelous magnificence and strong balance. There are a very few women who can deal with the level of determination and feminine elegance showcased by her.

Libra woman has a way of innately convincing others to go along with her reasoning and ideas. Her intelligence and way with words coupled with her charisma and tender romantic side lures Pisces man into her web of dreams and imaginations causing him to fall helplessly in love with her. She quickly grabs his attention, pull him into her world and wrap him tightly around her finger. Their compassion is unprecedented and their conversation never runs dry. If she leaves, he misses her as she misses him too. Libra woman shows faith in her Pisces man and a positive vibe when his moods change. She could, perhaps, teach Pisces man a bit more about practicality in his life. She hangs on to him even when he is irritable because she knows how to calm him down; after all he is the man who fulfills all of her wishes and makes all her dreams come true.

Pisces man’s patience is his biggest virtue. He is one man who easily convinces his Libra woman and also assists her if she needs him. She tends to lean more toward the real and practical side of things, while he keeps to the imagination more, but he is amused to watch her try to balance the real versus the imaginative. Her indecisiveness is easily handled by him. Libra woman does, possesses the wisdom and logic to make the best hasty decision she can make. He creates a positive mindset for her when she needs it. She may be authoritative and moody at times, but her Pisces man’s patient virtue comes into effect here as he knows his Libra woman is the one true person who always believes in him and stands behind him.

The union of Libra woman and Pisces man results in a wonderful blend of emotions and intimacy unmatched by others. Once these two decide to remain together, she learns to control her bossy and hasty nature, while he learns to be more practical with her motives for this behavior. As he verbalizes his admiration for his charming Libra woman, she feels a bounce in her femininity making her love, her Pieces man more and gives him the freedom he deserves. Their love becomes so pure and strong that all their misunderstandings dissolves away and even in the worst of arguments do not stand for long. Basking in the warmth of Pisces man’s smile and the music of Libra woman’s laugh, they both feel each other’s tenderness forever.

Pisces man and Libra woman has a very beautiful chemistry. Their intimacy is romantic and tender with so much to express verbally as well as physically. He normally does not allow himself to be so tightly bound to a relationship, but his connection with her is excessively intense on a spiritual level as well as on a physical level. Their sexual relationship is the one thing they have that is so powerful it could be the ties that keep this relationship together. She heightens his desires and cravings for her to a level he won’t be able to control and he mystifies her and pulls her into his world of dreams and affection. The gentle touch of Pisces man brings spark to Libra woman’s soul and arouses her to show her hidden passions. They can have both cuddling hours and passionate hours full of love making depending on their mood. Their togetherness is highly fulfilling for them in all dimensions of their existence making their relationship complete. Together their sexual abilities are unmatched to most.

Pisces man never lies to his Libra woman but he keeps secrets. He never completely divulges himself to her and this irritates her and angers her causing troubles in the relationship. Although Libra woman is sweet and tender in nature and Pisces man is a strong and intelligent creature, she is the dominant one in the relationship always having the last word with any argument that may surface. He takes it to and extent, but if she goes overboard he digress away from her and eventually away from the relationship. When a problem arises Libra woman is known to find a solution using her intellectual abilities whereas he takes a more emotional approach. Although their love for the arts and their similarities for a deep rooted romance go hand in hand, their differences and arguments conflict so immensely that any hopes of a good and solid relationship are pretty much futile.