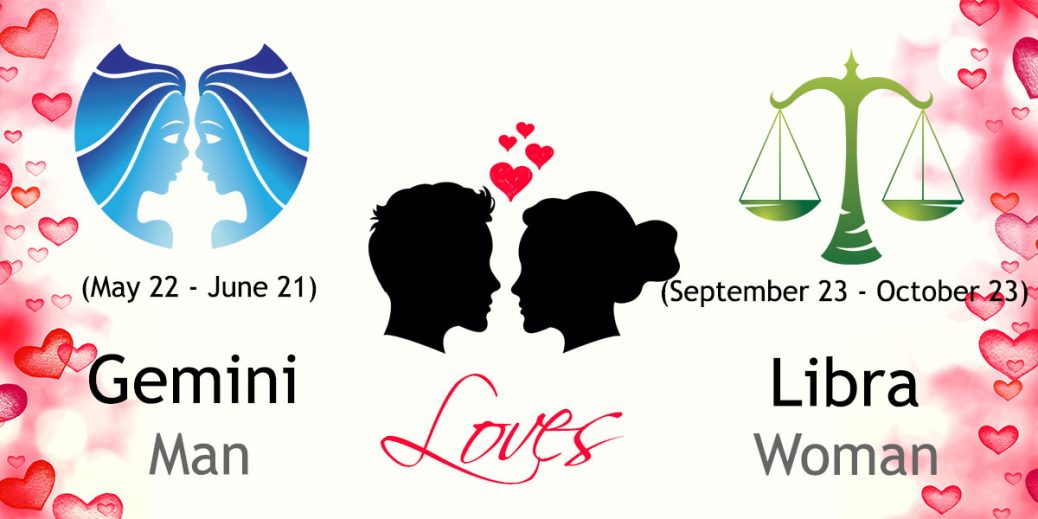 The Libra woman may find that a relative in need requires a lot more time and attention than either of you quite bargained for! Be giving and understanding but don't neglect to set up some boundaries.Neither of you should be at the call of an outside influence all the time. Don't do for others at the expense of your relationship. The Gemini man may be called to offer testimony soon. An accident or injury impacting you or someone in your life could result in litigation and disputes. Take a break and schedule some relaxing, quiet time with no serious matters to mull over. See a comedy show or indulge in a good meal. You deserve an escape from the stress you've been dealing with.

The pair of Gemini and Libra is rather a lively combination in which communication doesn’t just flows, it bounces and leaps. However, Libra focuses on the excitement of togetherness, while Gemini is not so specific in the needs for stimuli. Nevertheless, this relationship can contain markedly less of the jealousy and disputes.

A Gemini man is a wanderer of sorts, charming the ladies on his journey, weaving his way in and out of things whether it is in his career, socially with friends or in romance. His charm and silver tongue gets him out of almost any situation he doesn’t want to be caught in, even making it seem as though it is other’s fault. Make a Gemini man angry and his language becomes harsh and sharp, but it is very temporary. Long term is not in Gemini man’s terminology. In a love association a Gemini man seeks more fun than stability. He loves his individuality and respect the independence of his lady as well.

A Libra woman is a sweet, charming and pleasant lady masked with a smooth style that enables her to pounce when her predator gets close. Resistance is futile against her clever and indisputable logic. Often a Libra woman does almost anything to get her way. She uses her feminine antics and even stoops to a helpless nature if need be. A Libra woman hardly ever goes for a man who is intellectually beneath her. For her, all is fair in love and war. Being in a relationship makes a Libra woman a very devoted and helping partner in all walks of life.

A good relationship between Gemini man and Libra woman will be filled with romance, travel, music, flowers, children and love. They are quite the compatible couple in more ways than not. There is a tremendous amount of respect from one to the other in their thoughts, their privacy and their individual freedom. A Libra woman is just so very much appealing to him when she helplessly convinces him that it was his idea to finally settle down with her and create a future that is more stable. She provides her Gemini man with a strong support and gets her way any how. The Gemini man can always count on his Libra woman. She creates a balance in her Gemini man’s life and makes his life more organized than he ever had.

Gemini man is quite irresistible to Libra woman when his charm flows over in convincing her to leave her stable life to fly with him into a future of uncertainty. He can temporarily lose his cool, but eventually sees into what his Libra woman is doing and turns things back around to his benefit. Libra woman acts hurt and astounded at her Gemini man’s antics but no one can truly trick a Gemini man. He is far too witty and intellectual for that. Libra woman has a difficult time in deciding on a true love and is, more than likely to rush into a marriage or long term relationship with her Gemini man before she has realized the futuristic consequences of such a big step.

The graciously harmonious relationship of the Gemini man and Libra woman is smooth sailing unison on sparkling water that is so flowery and exciting that it can puzzle the others and sometimes them too. They both know where to being but to stop is a real mystery for them. As the light of love dances in their eyes and they look over each other’s flaws to melt in essence of romance, they create a magical world of their own where happiness is reflected through Gemini man’s eyes and Libra woman’s charming smile. They are way too generous to take care of each other and bring some lovely changes to make the life more worthwhile. As the music flows through the air with mild fragrance, the Gemini man and Libra woman blend all of them beautifully to bind for ever and make an eternal relationship with joy and peace hovering around!

Being on a more romantic level than a physical one, the sexual relationship of Gemini man and Libra woman is more peaceful in nature. Though a lot of passion is not involved, but the haunting relationship between the two is enough to keep both of them fulfilled and happy. When engaging in each other on a sexual level, there is always some of aloof romance between the Libra woman and Gemini man. The bond they have is of an emotionally romantic interlude filled with beauty that saturates their intimacy. The art of love making between Gemini man and Libra woman is one that is taken carefully, indulging in the exquisite nature of each other, refining the art of it all and keeping it delicate and beautiful. There is no room for erotic appetites or vulgar moves in their sexual intimacy. This may be, if any, where the voluptuous Libra woman could get a bit offended. Although Gemini man feels the same as Libra woman in the state of sexual bonds, his desire for a bit more variety may cause problems in the relationship.

Libra woman is more intrigued in attracting her Gemini man in the beginning of their relationship and twisting him into a temperament that makes him angry and argumentative later on. She takes pleasure in taking his witty conversation and turning them around to use them against him. In their financial equation, Gemini man and Libra woman tend to have similarities as well as differences in how they feel about their money. Although it isn’t the main importance in either of their lives, Gemini man goes spending it as fast as he can make it. His thought is that money is only important when you don’t have any. For Libra woman, money is important to keep up on her lavish lifestyle she likes to partake in. But that is pretty much the extent of it. This relationship is not one to be taken lightly and should be thought through thoroughly but with the mindset of Libra woman and Gemini man, this is more than likely not happen.