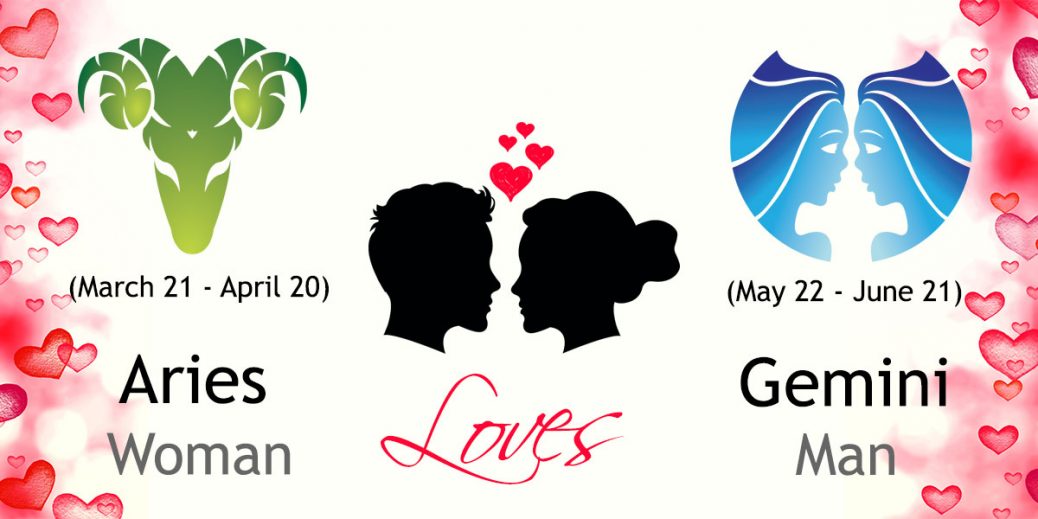 The Gemini man is very career focused at present, trying hard to attract the attention of a boss or authority figure. Working for a raise or promotion is a worthy goal but not at the expense of your relationship. The Gemini man may be out of touch with the Aries woman's worries and needs at the more than one occasion in the year 2022. A doctor's visit or even a hospital trip could be required to address a health concerns of one of you or of a close loved one. Cherish the time you have with an elder in 2022. It isn't an inconvenience. It's an opportunity to bond with those who have supported you both in the past. It is also a chance to think about future generations.

As the calm and airy Gemini feels a connection with the fiery Aries they can work very well as team in all aspects of life. Both of them enjoy the commonly shared love and affection but for Gemini, their freedom is above the security provided by love while for Aries love is just a synonym of life.

A Gemini man is mentally ambitious person with very cool and calm aura. He is generally a logical and rational being but lacks practicality at times. He never fights for position and authority as it gives him the space to explore different avenues of life and helps him remain free of responsibilities. He falls for an Aries woman very quickly as he falls in love with the mind first and Aries woman is definitely an intellectual lady. He is never a jealous man, which can cause some problems for him with the Aries woman as she likes her man to be a bit jealous and possessive.

An Aries woman is very energetic and ambitious lady and is always ready to take initiative in all aspects of life. She is ready to accept any idea, sound or unsound, that appeals to and arouses her emotions. She is generally quick in making decisions and has a direct approach for love. In love with a Gemini man, she needs constant reassurance as she has the fear of rejection deep inside her. She expects her lover to live in her dream world and fulfill all her demands of affection and devotion.

An Aries woman in love with a Gemini man provides him with a partner who can go to any extend to defend and protect her man. She helps him in achieving success and fulfilling all his wishes with her strong courage. She gives herself away quickly, by holding nothing back and ensuring her Gemini prince of all the love and intimacy. She often allows her fear of rejection to create serious bitterness towards others. This woman needs constant reassurance. He should always remember that she expects all he can give and some more. There is a magnetic force of his care free nature that attracts her and she expects him to be the miracle of her life giving her innocent faith and passionate love to him.

A Gemini man always provides an Aries woman with a calm and collected partner who has a mental rationality of her equal or rather even more. Aries are rulers of the head, while Gemini’s rule the mind. This causes the mutual attraction between them. He loves the mental challenges (and some mind games too) she gives him. He is able to bring out her sweet and affectionate nature that she rarely reveals to others. He proves himself to be superior in some ways, while making it clear that he admires her for her own qualities, which are equal to his and some even superior. But the sense of jealously and fear of loosing love makes her dominating and possessive which cause problems between them as he loves his freedom above everything.

The union between an Aries woman and a Gemini man result in an explosion of emotions and intimacy unmatched by others. Once these two decide to remain together, she learns to control her jealousy and insecurities, while he learns to sympathize with her motives for this behavior. As he verbalizes his admiration for the lovely Aries woman, she feels a bounce in her femininity making her love him more and more and gives him the freedom he deserves. Their love becomes so pure and strong that all their misunderstandings dissolves away and even in the worst of arguments do not stand for long. He does a lot of chasing, but rarely obtains what he is chasing but she provides him with stability and helps him achieve all his endeavors. There is no in-between for these two as their relationship reaches the triumph.

The Aries woman has a more passionately burning need of physical intimacy while the Gemini man has some slightly airy desires of making love. As for their physical compatibility, he is one of the few men who are capable of creating the illusions this woman needs during sex. But there are two side to the same coin. Sometimes she begins to feel that he is holding something back, even during intimacy. This is not just a part of her delusional thinking. A lack of pleasure is lacking on his part due to his airy approach to lovemaking. Love making to him is equivalent of some hot imaginations and sensations. He closes his eyes, and he basks in the pleasure of oneness, feeling the surging, pulsations of relief sweep through him and this baffles his Aries lady even more. He needs to understand that he does not have to put on a show in bed. He needs to become more involved in the love making process and engage in intimacy. It will take some work for both of them to keep their love life burning brightly.

The Aries woman and Gemini man lack restraint in the area of love between the two of them. They are very fulfilling and rejoicing couple. He admires the intellect and courage of the Aries woman, the possessiveness and jealousy of this woman hampers his liberty making him feel uncomfortable and bounded. Though she also esteems hid level-headedness, his carefree nature makes her feel unwanted and unprotected leaving her cold and detached. To make the relationship actually work he has to be more considerate and she needs to leave her fears behind to fly freely with her cheery Gemini man.