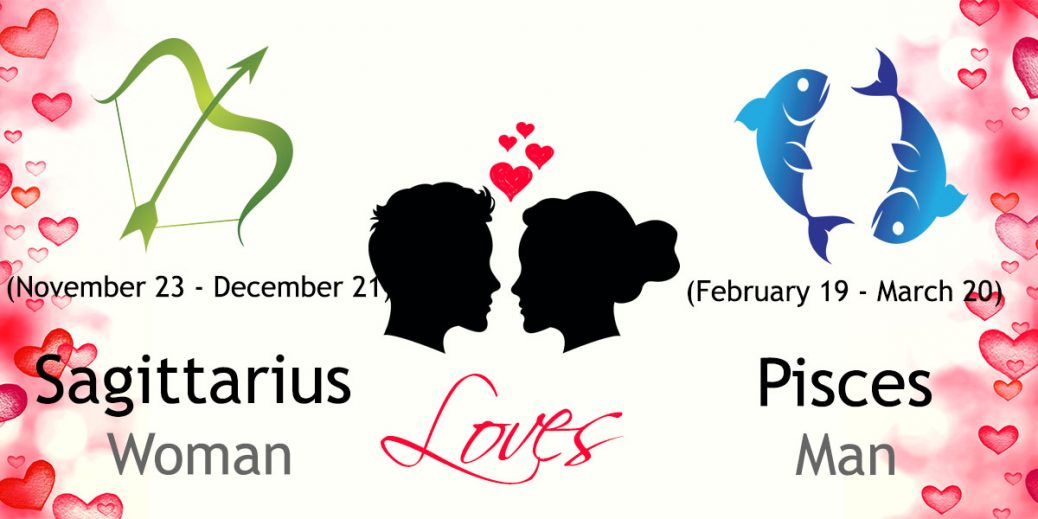 The Pisces man is interested in making improvements to physical structures, to relationships, to life conditions. These big plans might need to be tempered by a need to redress a situation impacting the Sagittarius woman's family. The Sagittarius woman is focused on a maternal figure, maybe because of a health crisis. As a couple, you need to find ways to relieve the stress and set some clear boundaries around your life. Engage in a project together. Decide to repair a home or invest in something of value. You could use a shared goal so that you will also have something clear to celebrate together.

Both the Sagittarius and Pisces are somewhat restless in love. As they develop the tendency to look beyond their relationship to fill up the holes in their relationship. Though they cannot fulfill each other’s every need, but at the same time, they appreciate what each one has to offer to the other.

Pisces man is basically a very impressive and up to mark individual with tender emotions and an intelligent mind. He has his own dreams and a dream world that he holds dearly. Though he is dreamy in nature but he never has his head in clouds and always looks out for the pros and cons of situations. A Pisces man is never judgmental in his attitude towards any dispute; rather he avoids getting involved in one. But any way, he is definitely everything one can want him to be. He is always very lenient and loving towards his lady love but he is never weak. He always binds his lady with his charm and delicate approach.

A Sagittarius woman is a very independent woman with a particular charm and an outspoken nature. She respects her individuality and hates to be dictated. There are also some Sagittarius women who are inquisitive in nature and go for something without judging the pros and cons. With all these, a Sagittarius female is wonderfully fun being with. She is quite the optimistic creature, looking toward the future with high hopes and not worrying about the negative outcomes. She always makes her man feel spirited and loved. Though her blunt comments may sometimes hurt him, but generally she is a fun to be with.

Pisces man and Sagittarius woman have a relationship that is not concrete or steadfast. She tries staying ahead of the game in trying to figure out her Pisces man and all the while, his silly antics and ever changing ways tries her patience like no other. At times she is so in love with his dreams and ability to just change things at the drop of a hat. Other times it is difficult to bite her tongue as these same Pisces man qualities try her nerves. She is normally very calm, cool and collected but crossing her can change her quite rapidly. Sagittarius woman is as friendly as she is honest and truthful. She may cut him down with her harsh words, but she is sincere in doing so. She doesn’t mean to be so blunt but she doesn’t know any better. If taken with patience these two can have a healthy relationship and ways to grow together.

Pisces man has a difficult time in making decisions in life. He is not too confident and needs reassurance constantly from his mate. Easily swayed by most, he learns to trust too quickly letting others decide for him. In such situations Sagittarius woman feels obliged on her part but she doesn’t like him trusting everyone around. He doesn’t judge anyone and this makes him a great companion for this woman as she adores his trust for her. He always looks for reasons in trying to understand rather than passing judgment on anyone. If there is enough love between them, they can learn to communicate and work out their differences not letting outside influences get in the way. If they can keep their love and troubles away from outside eyes, they just might be able to stay together but their idea of ‘together’ may be total involvement and in love one day, just friends the next day, separate ways down the road and back to serious dating after that.

Love’s greatest gift is its ability to make everything it touches sacred and same way the souls of Sagittarius woman and Pisces man are purified in the shower of true love. When these two signs absorb each other graciously, there is no love that is as fiery and sweet as that between a Sagittarius woman and Pisces man because this combination of fire and water lasts forever. Their unison becomes so strong that their emotions melt and become a running brook that sings its melody to the night. They wake up at dawn with winged hearts and give thanks for another day to love each other. The hours they spend with each other are looked upon as sort of a perfumed garden, a dim twilight, and a fountain singing to it. They make each other feel alive and give the reason to live life more beautifully.

In intimacy, Pisces man has to be more aggressive if he wants to have a satisfying relationship with Sagittarius woman. His submissive and relaxed behavior just won’t cut it with her. However, later she may ask for these very qualities in that it brings his tender and romantic side out. Sagittarius woman, on the other hand has to bite her tongue when feeling the need to be critical of him. Her sharp tongue and harsh words may cut her Pisces man to pieces if she is not careful. Yet again, later her same qualities may intensify his hunger for her and enrage his fire and passion. They have to work together on these on again, off again qualities they love/hate about each other in hopes that they shine when they need to shine and are hidden when they are no longer wanted or needed at that moment. The passion of Sagittarius woman can always help to increase the desires and the romantically knitted smooth ways of Pisces man gives a soothing experience to their love making. When beautifully intimate these two can have a very fulfilling sexual relationship with Pisces man on his higher side melting away the doubts of his fiery maiden and Sagittarius woman giving him the reassurance he needs with her intensity.

Possessiveness and jealousy are not issues between these two love birds, nor is the inability to give each other the independence they so desire. However, Sagittarius woman’s concepts towards being spiteful and too honest against her Pisces man’s concepts of self pity need to ease up considerably in order for this to work. If she truly loves him, she has to learn to soften her blows toward him. Sagittarius woman should know how fragile her man’s ego is and she should try her best to appease him better. Pisces man, on the other hand, needs to grow some thick skin and learn to let her remarks roll off to the side and not take them so easily to heart. Perhaps if communication is there and he explains just how hurtful her words are to him, it would help the situation and definitely make their relationship better in all aspects of life.