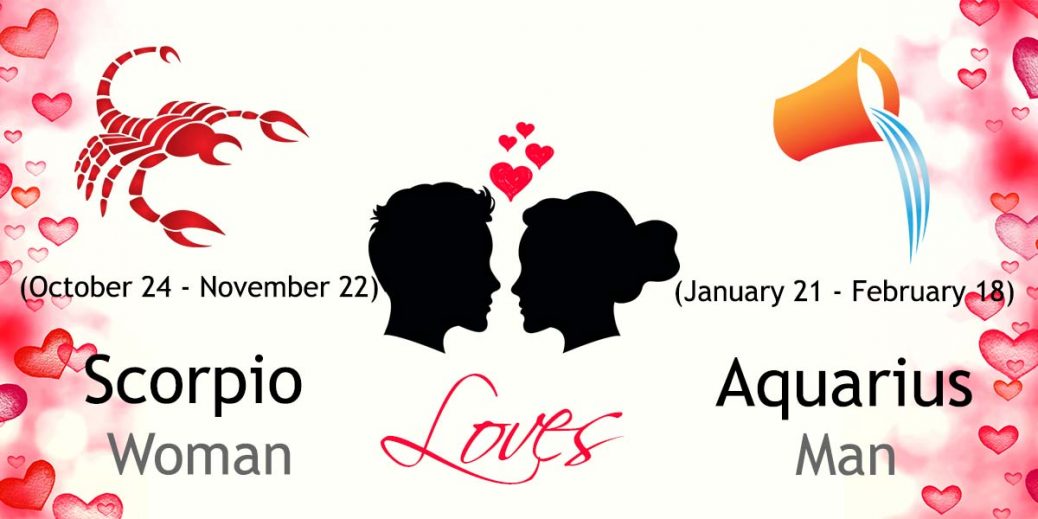 The relationship of Scorpio and Aquarius can be rather tempestuous at times, but exciting nevertheless. They both admire each other’s strength of character. Scorpio’s nature is intense and personal, and very passionate. While Aquarius is easy going, open and frank with not much to display emotionally. They need to be quite truthful, diligent and honest to have a long lasting relationship.

An Aquarius man lives his life in a dream state. He is highly independent and stands behind any decision or promise he makes. He is not one to hide himself or his emotions, which makes him easy to read but does not easily commit himself to anything or anyone if he does not care to. Aquarius man is a bit moody but generally one can find him calm, generous, affectionate and full of good and quality humor. He is always a very generous lover towards his lady. He is sympathetic to all her demands and can even control her emotional outbursts.

A Scorpio woman is a totally poised lady with alluring charm in her persona. She is a complete woman with seducing exquisiteness and adequate fascination to make the heads turn for her. She is the master of her soul. The constancy and passion for love in a Scorpio female comes inexorably. She is highly possessive and quite suspicious of all of her relationships. This woman provides a lot of affection both emotionally and physically to make her man feel secure. She is a wonderful lover but jealousy may arise when she finds other girl around her love making her feel uncomfortable.

Aquarius man appear to be detached and somewhere out of focus when it comes to reality but the Scorpio woman who loves him sees this as a breath of fresh air and sees it as contributing to her otherwise down to earth and practical lifestyle. Since she tends to suppress any emotion, refusing to give it up for the rest of the world to read and he is a plethora of excitement, dreams, ideas and antics, together they seem to mold to each other giving the perfect qualities to a bond well formed. She can read others quite well while keeping her hidden until the time comes to where she feels the need to reveal all or part of herself and that’s definitely when she meets her Aquarius man. She can also show him to be a bit more self-controlled when it comes to losing his cool. What happens in the end is as unpredictable as the future but with her patience and his co-operation they can always make a good relationship.

Aquarius man has to step up and make the first move to capture his Scorpio woman’s heart. He can always make her some different person than what she is when she meets him. He can teach her to be a bit freer and not such a stickler when it comes to putting her foot down with suspicion and possessiveness. There may be times when Scorpio woman let a bad past experience get in the way of their path together, but her Aquarius man’s ability to go with the flow of things helps her get around such blocks and continue with he man as they skip down that path hand in hand. She may tend to go down a certain path because of the way a past experience has worked out, but this is rare as she is more than patient in waiting for the right time for every decision she makes and this helps even her Aquarius man to get stable in life.

As the relationship of the Scorpio woman and Aquarius man gets mysteriously interlaced, they can read the unspoken messages through each others’ eyes making their intimacy astoundingly beautiful. She holds him with her beckoning secrets of her eyes and he binds her strongly through the indefinable mystery of his existence. Their dreams are shading with lilac and sparkling silver that makes their realities even more vivacious and flamboyant when they are together. He becomes more stable and responsible with time while she learns to be free and less suspicious. Their love has a delighted sensation that brings out all the daintiness of the Scorpio woman and binds her Aquarius man so strongly with silky threads of affection that he just leaves all his mysterious odds and falls in the never ending eternity of oneness with his lady love.

The sexual life of Aquarius man and Scorpio woman is not very smooth, especially in the beginning. Her need to be close during sexual intimacy is not easily found in Aquarius man. He appears to be detached from her and in the situation when he is physically present; still his thoughts are merely up in the clouds where they feel at home the most. She should know that he does not do this because of her. He is merely happier this way. This causes her heartache which, in turn, causes a rise in her suspicion and jealousy. Scorpio woman’s best bet would be to show her Aquarius man she can be as close a friend as she can be a lover. This gives her a better lover in him who is verbally as well as physically more expressive. On the other hand, as he shows some more sincerity and trusts his Scorpio lover, his thoughts will no longer hover around and will be too busy being focused on her making their sexual union more devoted one. This can help them to uncover their deepest emotions and follow their bliss in making love.

Problems arise between the two when Scorpio woman tries to bind her Aquarius man from his freedom, something he feels is his given right to have. He rebels against these ties and hurt her feelings. She, in turn, shows anger, jealousy and rage and even goes along through life as if he does not even exist. Scorpio woman draws her feelings back and hide them deep within her and appear to not care as to whether he does what he wants to do or not. This breaks the intensity between them and spoils the relationship. Without proper communication, they won’t be able to come to terms with the problems that arise in this aspect. In a mutual bond between the two, they can each learn from the other one. Aquarius man’s weaknesses are Scorpio woman’s strengths as her weaknesses are his strengths. They can always complement each other and make their relationship finer.