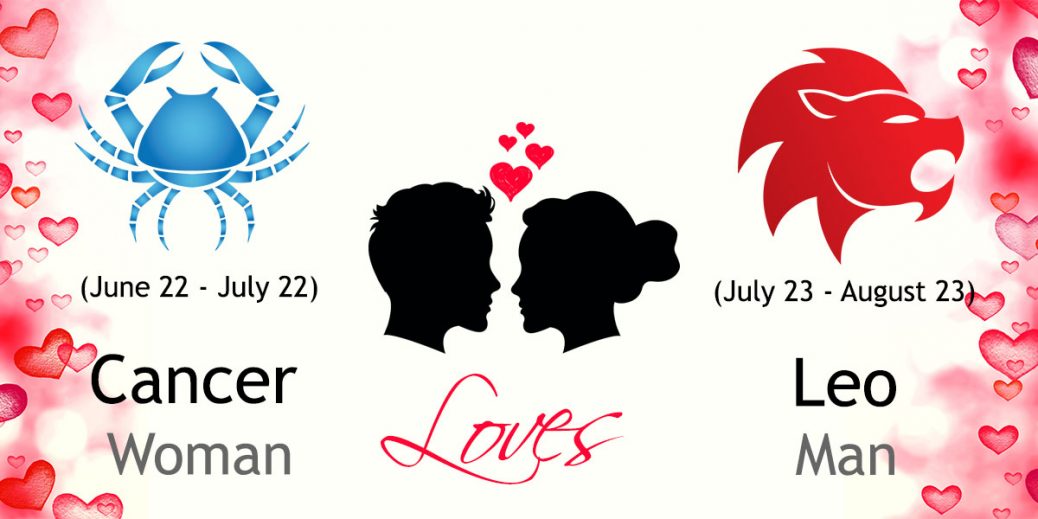 A father figure or mentor of the Leo man plays a pivotal role in the 2023. One or both of you could have the opportunity to travel which would be advantageous in exposing you to new ideas and systems of belief. If you are traveling, be aware that complications could arise, including restrictions or accidents. The Cancer woman is intensely focused on professional goals and feels close to a major break through or promotion. As a couple, be aware that there may be not skirting family complications. A relative's recent poor decision could have wide reaching consequences that pull the two of you in. Work through the stress together and you'll be stronger for it.

A Leo man is magnanimous and gallant suitor with tender protectiveness and mawkishly affectionate towards his near and dear ones. Whatever and wherever he does something, there is bound to be an audience. He is proud but at the same time a die hard romantic person who cannot stand domination and ignorance at any cost. He is very generous in terms of finances to maintain his royalty. He can easily fall in love with her who can flatter and respect him. He provides her with protection and standards that are rare and worth admiring for a lovely lady like her.

Cancer woman is just too sweet to be avoided. Her caring nature and strong devotion can make anyone fall for her. Though she is approachable and seldom openly aggressive but at the same time she is very particular with decency and cannot stand any kind of cheapness and vulgarity. But she also has some dark fears, which are to get rejected or get less love in return of her supreme devotion. She primarily reacts in two ways when she falls in love with the strong Leo man, either she turns out to be very gentle and womanly shy or she feels that she is not good enough.

The Cancer woman makes a very gentle pair with a strong Leo man. She nurtures, respects and appreciates him wholeheartedly making him more confident and a better person. He always finds her fascinatingly wonderful lady with a taste that can stimulate his spirits. She provides him with all the lovely traits he wants to see in his lady love and gives him a pampering which he always craves for. She never tries to upstage her majestic lover but definitely enjoys the role of queen in his life with full enthusiasm and grace. The sacrifices made by her are always valued deeply by him. But being a Cancer woman she has her long moody phases and tears. Also being insecure in her nature, she may become over possessive making him uncomfortable and unstable.

The Leo man provides security and warmth to the Cancer woman with a touch of royalty in his actions. He is generally a strikingly good looking man with all the passion to keep his Cancer woman intact. He adores his Cancer damsel for her funny, bright and alert attitude. He soothes away all her fears with his love and nearness and makes her comfortable around him. In his king size world, he keeps her as a tsarina with an exceptionally generous compassion. Though at times he is very arrogant and unkind and he may also turn out to be very indifferent if he finds her over shadowing him or disrespecting him. This can hurt the sophisticated Cancer female deeply giving her tears and even sometimes life time bruises.

Leo man and Cancer woman make one of the most beautifully romantic relationships in the world. They both deeply and genuinely admire each other’s minds, talents and accomplishments. The Cancer woman personifies the mystery of womanhood and all complex yearnings and the Leo man personifies the conquering charisma of manhood, wisdom and strength. Their togetherness forms such a miraculous statement of love both emotionally and physically that they experience the heavens on earth in each others’ arms. A Cancer woman is likely to bring out every ounce of passion in a Leo man while the Leo man makes her more beautifully confident and secure woman. The kind of love and oneness they share describes the overall existence of life on earth with the importance of the elements of Water and Fire giving both of them a fulfilling experience that last till end of the horizon and till the time they can walk in the eternity of their love.

As the Cancer woman and Leo man accept the differences in their personalities, they make one of the most physically appealing couple to each other. They will have a great physical relationship because the Leo man is very affectionate and the Cancer woman can aptly reciprocate his feelings. The Leo man can become very demanding in a physical relationship which is usually fulfilled by his Cancer woman, whereas the Cancer woman is quite sensitive which is provided by the passionately emotional side of the Leo man. They have a strong sexual bond because she is quite gentle whereas the Leo man has very intense emotions and this combination can prove to be a very good foundation for their relationship. She can hurt the Leo man with her changing moods due to which she may become less responsive to her Leo man at sometimes during their love-making. While the Leo man can become aloof and the Cancer woman might think that he has become indifferent. The Cancer woman feels safe in the haven of his arms because it gives her a strong sense of security and makes her feel loved and needed.

The relationship between the Cancer woman and the Leo man can take many forms depending upon their compatibility and understanding. Either the Leo man becomes dominant and she turns out to be more moody or due to the constant nagging of Cancer woman, Leo man loses his confidence and becomes very silent. Though Leo man is very generous and warm and Cancer woman is very loving and sensitive but the arrogance of Leo man and over cautious nature of Cancer woman create troubles in their relation. It takes a lot of love and patience for them to gradually trust each other, for their dreams, their goals are very different. To have a lasting relationship, both the Cancer woman and Leo man needs to adjust with each other and compromise with their differences.