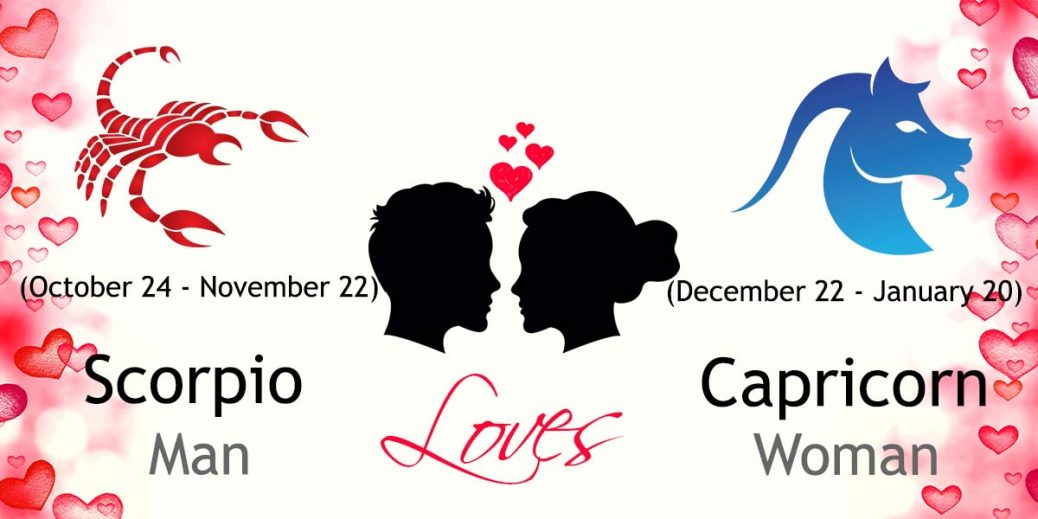 It is time as a couple to face some relatively unpleasant facts. Repairs and renovations to a family home can no longer wait. The savings you may have earmarked for a romantic getaway may need to be put towards a more banal use. Don't put off decision making as it could cost you more in the long term. Family takes priority over friends in 2023. The Scorpio man might be feeling somewhat cut off from the usual social group. The Capricorn woman is in need of some personal quietude, of a setting that is conducive to peace of mind. It isn't elusive. As a couple, you just need to seek it out together.

The attraction between Capricorn and Scorpio is deeply felt, and has the potential to withstand the test of time. The stability and caring nature of Capricorn feel regenerating to Scorpio, and Scorpio sense of an all-encompassing love appeals to Capricorn deeply. Both have different ways of expressing their love but always make each other feel admired and loved.

A Scorpio man is an invincible person. He has a specific goal and a specific plan in reaching that goal. Beneath the soft voice of Scorpio man lays his subtle strategies to enhance his career and personal life. He is one person who loves luxury and comforts immensely. A Scorpio man can be ardent just about anything, including sex, love and family. In love with a deserving woman, Scorpio man is a passionate lover who knows all the synonyms of romance and eroticism. Though he is a great lover, but together with it he is very jealous and suspicious in nature too.

A Capricorn woman is enigmatically feminine with no faults that are usually found in women of other zodiac signs. She is a gentle and kind lady with a capturing aura of delicate personality. Her feelings are strong and tender and her loyalty is spotless. Capricorn woman is a tower of strength for her dear ones and perfectly able to manage herself in all areas of life. Patience is her dearest virtue and intellect is her biggest weapon to win in all circumstances. Being in love with a dependable man, stirs the deepest emotions of the Capricorn woman with all the adorable ways to esteem.

Capricorn woman is extremely loyal and honest with Scorpio man as well as being calm and delicate. This coupled with his understanding in her, fires him up and intensely increases his desire to protect and love her. She is ambitious and reputable and although she aches for that affection that makes her feel so much like a woman, no one can catch her revealing such things. She appears to be cold and quite unsentimental towards her personal life and family but it could not be further from the truth as to her actual feelings. Devotion is the biggest trait that makes a Scorpio man, feel comfortable with a Capricorn woman. Though he can find her to be possessive and bossy at times and also has to tolerate her rage and stubbornness but with such love and loyalty in return, he understands her value and keeps a cool temper while dealing with her.

The relationship between Scorpio man and Capricorn woman is not one that is too full of emotion or passion. To each other, their love is quite formal and is a play by play instructional that is more practical than anything else. There may be a reality check and a test of dependability to pass before successfully getting to the next level. This leaves room for the occasional problem to have to appease between them involving each other’s habitual differences. Any problem that does arise is carefully looked at and taken care of between the two, with all precautions taken about not revealing such problems to anyone else. Their relationship is very practical and they are more apt to go for the stable, sensible and realistic aspects rather than going out on a limb and trying something different. Any emotion that is between them can be brought out by ghosts from their past. This strengthens their bond as they share mutual and similar memories between them.

The earthy sensuality of Capricorn woman and watery passion of Scorpio man goes well together blending in beautiful blossoms of both physical and emotional intimacy. Things are safe in their own little world and nothing bad can happen at all. Scorpio man appreciates and understands his Capricorn lady very well and soon converts their understanding into a romantic endeavor. She, on the other hand, brings colors and joys to his life which he has been unaware of in his past life and provides him with a companion who is always by his side to love, care and understands his feelings. Their home is a temple of love where they both keep each other on pedestal to worship and offer their devotion, care and affection throughout their lives.

The sexual bond of Scorpio man and Capricorn woman is very simple and comprehensible. Although these two are very practical in their basic relationship, their sexual bond is a stronger form of their love and power for each other. She is easily able to curl up under her Scorpio man’s wings as he boldly protects her from the world with his tenderness and controlled intensity. He mesmerizes her with these traits. It is a form of dominance as well as submission in its purest form. Capricorn female’s heart is almost always turned on by sensing peace and coziness she feels by being held in her Scorpio lover’s arms while he needs loyalty, that he can get in plenty from Capricorn lady love. As the Capricorn woman and Scorpio man become aware of each other’s unspoken needs, their physical mating can be a truly transcendental experience and their sexual union becomes a strange mixture of eroticism and purity. They are the mates who not only make their physical love a great pleasure to be experienced but also worship each others’ forms with such depth and intensity of emotions and passion that their love making is almost a magic that cannot be experienced by most of the other zodiac signs.

As this is always a very wonderful couple but nothing is actually perfect and to reach perfection some amount of sacrifice is always needed, they must first conquer together their most negative traits: Capricorn woman’s baseless fears and possessiveness, Scorpio man’s burning jealousy and revenge compulsion and also their mutual financial caution. If these differences are passed by successfully there can be hardly any Scorpio-Capricorn relationship that is ever broken. As both of them are outrageous in nature and tend to retreat into solitude when angry, to have a healthy relationship they should rather openly talk it over to find solutions. For this relationship to work, they need to bring many changes in their lives. Although they are creatures of consistency and tend to fall into place with each other’s schedules, they need to push alternatives in what they do together. This keeps their connection from getting stale and avoids that wedge from getting between them.

Leave a reply to reigntheday Click here to cancel the reply