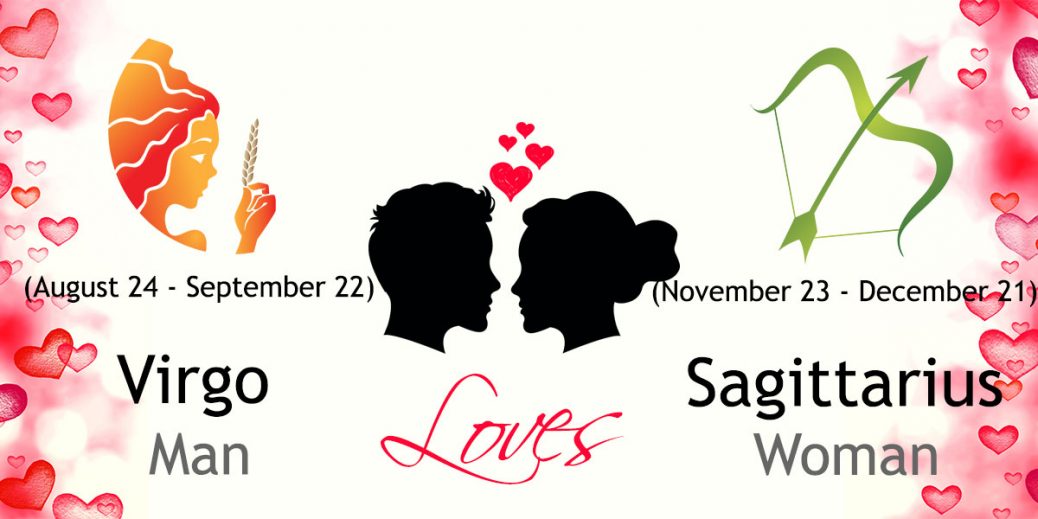 The Sagittarius woman needs a break from your usual setting where she may be feeling surrounded by opposition, perhaps of a personal or political nature. As a couple, take some time out of your regular schedule to revisit a place of great emotional significance, maybe a family home or a natural setting. It would be a great way to deeper the bond between you. The Virgo man may be feeling extraneous or undervalued. It would be helpful for him to take on a project that lets him work on something concrete and meaningful. You each need to weigh in on a purchase or repair before you make a monetary decision. Show each other how much you care through some simple gesture of affection--a handwritten note, a little token gift or just saying "I love you" more often.

The romantic association of Virgo and Sagittarius is one of the more difficult ones. Virgo is very serious while Sagittarius is playful in nature. There can be considerable attraction at the beginning, but some major disconnects in terms of values and relationship styles are likely to build up over the time.

A Virgo man is very stable, down-to-earth and realistic person with some values in life. He can be very caring and devoted to his loved ones but at the same time highly critical and often painfully nagging too. Virgo man usually has more than one problem. There are his own personal ones, which come in various shapes and sizes, plus those of all the chaotic, untidy, and careless people he knows, the problems of the world – whose lives are a dreadful mess. The Virgo man is always willing to give up his treasured loner’s existence for the love and admiration of his woman.

A Sagittarius woman loves to have fun and excitement in her life. She has those typical womanly charms and desires. It is merely in her nature to be as honest with others as she can be and doesn’t mean to be so crude at times. Being a very independent person, the family is a part of Sagittarius woman’s life but only a small part. She seeks a man who can protect her. She wants a man who is romantic, intelligent and honest. She herself is loyal and honest as long as she is with a man she is in love with.

Sagittarius woman makes her Virgo man feel like a hero, the protector for whom she has long waited for. This helps him to feel more confident about him. He loves the faith she shows towards him. She has been bruised and broken many times by the people she once loved. The Virgo male loves nothing more than to soothe her scars and promise her that he will never leave her wounded. They are both open to the world needing constant mental stimulation. Together with all her attention and delicacy she also gives her Virgo man a new outlook towards life which is more playful and exciting, bringing lots of adventures and happiness to his life. But sometimes she becomes so much outgoing that creates trouble for the Virgo man as he wants her to be around him at times when especially he is feeling down.

It is good for Sagittarius woman to know that Virgo man rarely makes a promise that he cannot keep. She is very vulnerable and he is able to guard her and show her the passion she needs. The warmth he provides her with, makes her feel as though she would be empty without it. He fills the life of his Sagittarius woman with new goal and expectations that give her a new approach towards life. But for her, he should never sacrifice his sense of personal dignity and self-confidence, especially not his self-respect. There are some stormy arguments and a few disagreements too between the Virgo man and Sagittarius woman. Both suppress and ignore these moments, in fear that it may be the demise of their relationship.

As the affection grows between these two charming people with true dedication towards each other, the outcome of their oneness is a blend of earthy stability of love with warmth of passionate fire! The Virgo man understands the vulnerabilities of his lovely Sagittarius lady and becomes more expressive and attached to her and the Sagittarius woman also becomes stronger and firmer person without losing her natural spunk and elegance. As they hold hands and look in each other’s eyes, they both can actually experience divine buds to unfurl in their hearts, making them happier and gratified like never before. With every soft whisper and with every warm touch the love of Virgo man and Sagittarius woman keeps on increasing making their unison a match made in heaven and blessed by angels to a degree of accord and delicacy.

The sexual relationship of Virgo man and Sagittarius woman is nothing special, but good enough to get by. She wants to experiment sexually, as she finds it another part of relationship to be discovered on all levels. For Virgo man making love is a serious matter which involves basic blend of emotions and bodies. Sagittarius woman’s sexual experimentation is only for her and her Virgo man with whom she is in love with. Once the Sagittarius woman finds the strong Virgo man she has been looking for, she becomes submissive. And he always thinks of her to be the sweetest woman on the face of this earth. He likes her devotion which stimulates his sensuality and then he feels free to expresses himself sexually. Their attraction for one another is there fascination with each other and the world around them. She provides passion and newness to the love making while he fills up the mood with devotion and stable exchange of mutual love that last longer and satisfies their bodies and souls completely.

Virgo man and Sagittarius woman are too scared to face the fact that their personalities may be too much for each other to handle. She is too fast and furious for him at times while she finds him unnecessarily skeptical regarding everything around. But losing her hero is out of the question, and he never breaks a promise, it just won’t happen. He is always there to pick up her when she is broken, which gives their relationship enough meaning to both of them to protect it dearly. They need to work upon their attitudes to keep their relationship going. If she can learn to think before she speaks the Virgo man will be happier and if he can remain strong and a little less analytical and judgmental of others, she remains content and more pleasant.

Leave a reply to Mark Click here to cancel the reply