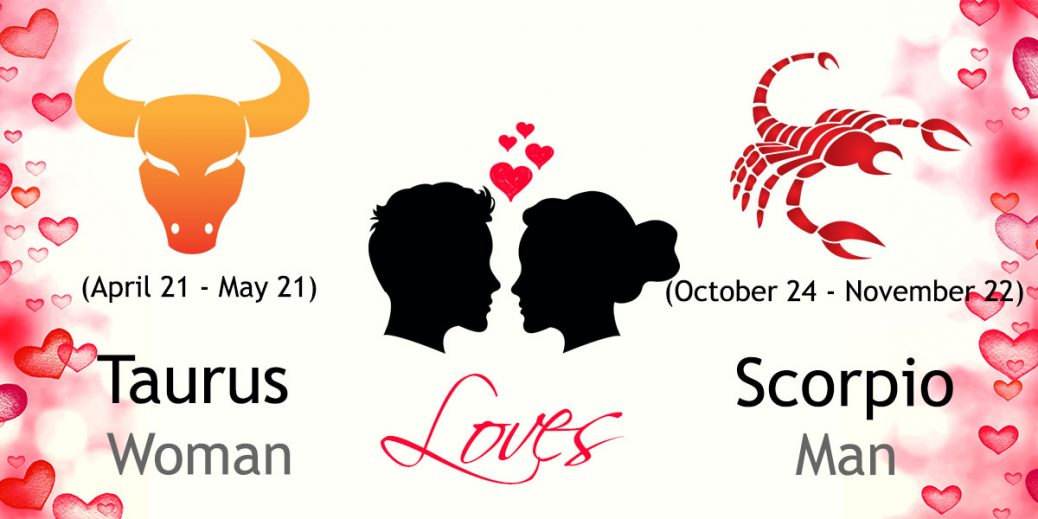 The Scorpio man is ready for some light-hearted fun after a lot of hard work put in professionally. His mood may be drastically out of sync with the Taurus woman who is navigating difficult personal terrain. A family conflict involving a sibling or cousin becomes all consuming for the Taurus woman. The answer could be to get out and let loose but the Scorpio man needs to be comforting and offer a sympathetic ear. Put in the work to get back on the same page to avoid an argument or even a temporary separation that would be painful to you both.

A Scorpio man is extremely perceptive and his the uncanny ability to understand the reasons and motives of others makes him more aware of the wide range of situations and possibilities. He is a person who has high values and uses his emotional intelligence for good purposes. While he has a reputation for being suspicious and vengeful, these are simply his darker qualities that only come out when he is personally experiencing a bad phase in his life. In a relationship, he is a very caring and protective mate who always stands in front of his lady love to keep her safe from all the worldly problems.

A Taurus woman is a very down-to-earth and hardworking person in all that she does. She does not tend toward being impulsive, instead she looks far ahead before she leaps and makes meticulous plans for the future. She may appear to be shy upon the first few meetings, but she can quickly warm up and be an entertaining conversationalist. In a relationship, she is a very devoted and loyal lover with warmth of love and supporting hand. She has very sensual and graceful approach in love life, making the relationship cozier and lasting.

As the eyes of the sensual Taurus woman meets the hypnotic eyes of the Scorpio man, there is an impossible to resist attraction that she experiences. Though in the beginning she feels he can be risky and unpredictable to deal with but his seductive qualities eventually wins her over, and with gracious luck she finds a man who can be trusted forever. She makes a great match for the Scorpio male who looks around for a woman with sugar coated heart and rock hard will. She knows how to respect and love him and how to make his life smoother without actually interfering. She gives her best of both emotional as well as physical love with a wonderful food, making the home of a Scorpio man the most perfect place to be in. She is intelligent enough to support him in rough times and to keep up his spirits when needed.

A Scorpio man in love with a Taurus woman adores his lady like a goddess. He knows how to love and respect her but never let her forget that he is the Man in the relationship! He has a passionate way of loving and protecting his lady love and provides her with the best of the things available in all aspects. He makes her feel special in a way no other man can make someone feel and also spoils her with lots of pampering, good food and best fragrances available with such a taste of music that makes her tap her toes. He is like a strong mountain, keeping her untouched by all problems and society evils. Though he is suspicious and sometimes passionate to an unhealthy amount but the kind of love and care given by him is far worthier than his grey qualities.

As love pours on the Taurus woman and Scorpio man tying them in a never wobbling knot, they both grow intimate and possessive of each other and actually learn to enjoy the feeling of being possessed in such a passionate way. The stubbornness of the Taurus female melts away in the passionate romance of her Scorpio male and his jealousy and suspicious order vanishes out in the devotion and loyalty presented by her. As their eyes meet to reveal all the lovely promises their hearts make to each other, blossomy unison is experienced by these two love birds. The deep love they feel for each other washes away all the differences making them two persons with loving heart and pure soul that claims for oneness and nothing else!

The blend of Water and Earth is one of the best, both in emotional as well as sexual relationship. Once a sexual link develops between the Taurus woman and Scorpio man, it becomes manifestly apparent that this is what drew them together. They both have powerful appetites and need an active, stimulating sex life in order to express them fully and feel appreciated to their greatest capacity. Their approach to sexuality does differ in some very fundamental ways. To Taurus woman, it is highly physical and earthy, and she reaches her heights primarily through her five senses. Scorpio man is quite the opposite. To him, sex is a metaphysical experience that takes him to a higher spiritual plane. Both form powerful emotional bonds through their love making, and their physical connection is without a doubt the strength of their relationship. Even when things go awry outside of the bedroom, their bond behind closed doors make them do their best to work things out. Their love making is a blend of passion and romance which makes them experience the highest form of fulfillment and Oneness!

This relationship begins with a bang and most likely is long-lasting but problems may arise for this couple when Scorpio man slowly reveals the deeper, inner side of his personality that he tries so hard to keep hidden from the outside world. On the surface, he displays only his cold, calculating reason and his deeply instilled practicality. These are things that Taurus woman is happy to embrace, since she values rationality and sensibility above all else. It is when the extremity and severity of his convictions come to light that she becomes wary. Even the stubbornness and blind prejudice of her creates issues for him who has a tendency of dominating in the relationship. If both of them are ready to co-relate their problems and talk it over, there is a good chance that these two find their way resulting in a happy ending.

Leave a reply to Patrici@ Click here to cancel the reply