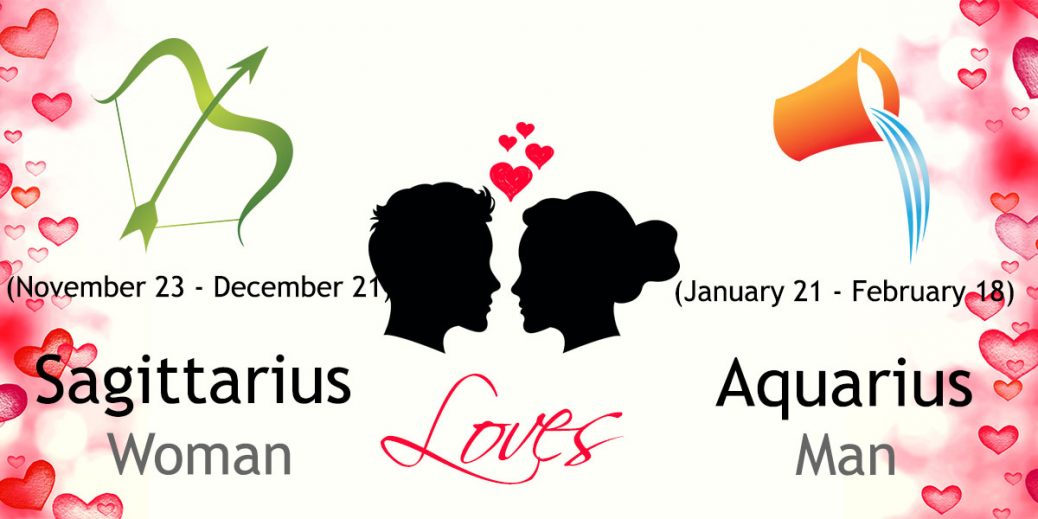 Sagittarius and Aquarius give an opportunity to each other to grow. Their relationship has much potential to work well. Both of them are moving forward, disinclined to stifle one another or fall into the ruts that many couples do, and this basic compatibility is most likely to lay the ground for an exciting relationship.

An Aquarius man has a way of deriving to a conclusion or goal he desires. To most he may seem nonsensical; however, his mind is of a genius status and has a unique way of getting to his success and achieves whatever he wants. He is a bit moody but generally one can find him calm, generous, affectionate and full of good and quality humor. Befriend this person and one can have a loyal friend for life. He never lies to his dear ones and always keeps his promises. His words are as true as the sky is blue.

A Sagittarius woman has many friends and is quite modest as well as honest. She may come across as too honest at times, and her words may hurt but she doesn’t mean to do so. Sagittarius female feels with truth comes honesty and to not let such things be known is just not right. This woman trusts others quite easily however in opening herself up to them and talking away until they know just about everything about her. When Sagittarius woman falls in love, her man can rest assured she will give the best of her attention and affection to him.

Sagittarius woman and Aquarius man have a great relationship most of the time. In the honest and truthful matters of life, they both are very similar. He adores her for this quality and is mesmerized at her drive for reaching goals she may have in her life. He sees her as a strong and independent woman. They agree on very much the same things and both seek the reality of things. He may realize what makes up reality over dreams before she does and this astounds her. There is always a blaze in their relationship which keeps up the warmth. But sometimes Aquarius man may find his Sagittarius lady much involved in her friends and adventures then their relation and this can give him lip lashes. This can be resolved by a little act of patient approach towards her rather than complaining.

Aquarius man brings a lot of newness to the life of his Sagittarius lady. She is more than likely to learn so much more from him than she could by asking questions to anyone else. Their conversation flows like water and they connect on so many levels. They learn that they connect the way perfect lovers or true and wonderful friends connect. This kind of a bond is very rare. Given everything between Aquarius man and Sagittarius woman, this bond that is formed remains strong and unbreakable as long as there is good communication between them as well as the ability to let each other go as they feel the need to find their independence. However, there are times when Aquarius man may seem too detached and cold to Sagittarius woman and she may feel left alone. In such situations she should move out for sometime and give him sometime to recover.

Love is the joy of the good, the wonder of the wise and the amazement of the Gods which evolves the souls of Aquarius man and Sagittarius woman so beautifully that they fall deeper in love with every passing day. Love is always bestowed as a gift by both of them to each other freely, willingly and without expectations and that is what makes it wonderful. Their bond is such an enchanted one which shares feelings and madness at the same level to make them feel accepted in all dimensions by each other. Mysticism between the Aquarius man and Sagittarius woman binding them with a shimmering thread of love connecting their souls make them a true mate for each other. Their colored wishes and dreams bring vibration to their relationship which is both consuming and exciting for ever.

The sexual bond between Aquarius man and Sagittarius woman is wonderful and very strong. They never grow tired of one another nor does their intimacy becomes boring. Aquarius man sees an amazing woman in his Sagittarius female and they arouse and stimulate each other just about every time they come together whether it is on an intellectually mental level, a physical and steamy level or on a close and cuddly emotional level. It may not be Aquarius man’s initial concept of things, but if a sexual thought were to be ‘planted’ in his mind, he picks it up and runs with it. He makes it the most amazing concept ever to be brought to his attention. This is what Sagittarius woman does to him. She is an amazing creature and he is proud to have her in his arms. She can get completely turned off by boring lovemaking and bad ideas and Aquarius man is not the lover that can ever let this happen. One moment he brings her to tears of love with his tender kisses and whispers of love. The next moment he can have her tearing up with laughter as he shows his clumsy and silly antics toward her.

Although this relationship seems to be made in heaven, it is not without a few bad sides, just something that they should keep an eye on from time to time. Sagittarius woman may tend to be overly impulsive and inconsiderate which irritates an unforgiving Aquarius man. Tempers, flairs and since they can both be quite stubborn, this is something that has to be compromised and worked out if surfaced especially if betrayal is a card that is played. As long as they communicate well with each other, they continue to be dependent on each other in all the right areas and will not have to worry about drifting apart. Sometimes when a wedge is hammered into place between these two love birds, it is too late before at least one wakes up and realizes just how far apart they grew. The magic and connection that is to be had in this relationship is quite rare and should be exuberantly embraced and cherished.

Leave a reply to Brownie Click here to cancel the reply